Your Body Is Talking Are You Listening? Volume One 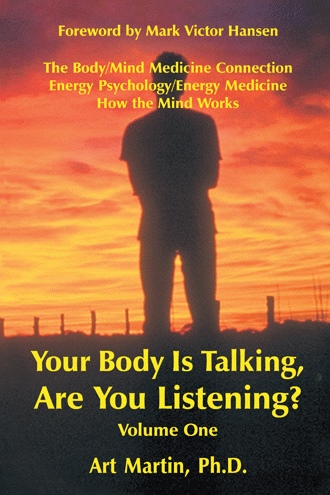 Are you ready for miracles in your life this book describes many miracles which have happened to people. Heather's Testimonial The coauthor of my book gave me Art's book "Your Body Is Talking Are You Listening?" I asked him "what is it about, have you read it. What do feel about? He had not even read it. "He makes some pretty controversial statements about his process" At this point I was ready for any thing to alleviate my 24/7 pain. I read his book in two days. I could not put it down. I realized he had the answer. He healed himself of the same issue I am dealing with and he did not submit to surgery. I called him with question "how can I get together with you as soon as possible? Where are you? His reply was "If you set up a lecture for me so I can make some money I can come to you" That won't work I wanted relief now, so I booked a flight to Sacramento. It was excruciating painful five hour flight, I had to walk up and down the aisle every 45 minutes to ease the pain in my back. When I arrived Art asked why I was wearing a neck brace. I told him "doctors had tried to fuse my back by putting two rods next to my spine to hold it straight. It did not work and I was not willing to go that route again and subject myself to their butchery again when it did not work the first time." "I trust you can do what you have described in your book. So lets get to work" I just wanted my life back so I could get on with my career. I could not work or travel the way I am now. In two days of intense work he had cleared 85% of my pain and had me feeling good. I threw away the next brace the first day. I was finally getting on track after 20 years of back pain. This situation was not about money or time. I had been trying for 10 years just as Art had done. As he has discovered no practitioners be they doctors, physical therapists, or any other healers, alternative, spiritual or otherwise did not know how to accomplish what he did for me. We worked 10 hours during two days. People saw my recovery from where I was and were impressed. Their questions were "how do we get Art to come to Orlando? That is easy all we have to do ask him." I wanted him to come on spring break so he could work with my adopted children. I wanted to get out of the hornets nest I had created by adopting children from Russia. He did that too. He was able to free them from birth mother rejection, self rejection, fear of intimacy, lack of trust and respect, fear of commitment and many I am not all right, not acceptable and feeling rejected. Now we get along great and they are now exceptional students in school. His work has set me up in a place where I can now become a best selling author and present seminars all over the US. This was not a one session go around. It took two years. This is an ongoing story He came to Orlando every three months for the next three years and still coming now. He helped me create my success story. What I would like to know is, if he was able to help me not only with my back pain and all aspects of my life to create my success story why are people afraid to confront their issues? He has the process and the formula for success in your life. Why are people not beating a path to his door?

This is the first book in the Mind/Body Medicine series, Healing Yourself With The Power Of Your Mind. We evaluate the causes of Illness, Disease and Behavioral and mental Dysfunctions. We Examine How The Mind Functions in in relation to how it reacts to sensory information it is picking up. Illness, Disease only exist as programs in our mind. They are not realities until we accept and make them happen. Our perception and belief is what causes illness and disease which cause the breakdowns in our body. Are you ready to find the answers to peace. happiness, joy, harmony, unconditional love and success in your life? Many times we think we are to change, yet when we come face to face with the changes that will provide us the opportunity to shift our path, we reject and avoid or run from the required changes. Do you find yourself in boxes and traps of self imposed limitations unable to escape? are you ready to find the answers to these dilemmas? Are you ready for miracles in your life? We block miracles by our resistance and illusions, doubt and fear. Ferar is simply False Evidence Appearing Real.. Sickness is a defense against the truth. Are you ready to face the truth who could be if you would face your issues? All we need to know is the base cause, the original core issue which is causing the breakdown to manifest. Your Body will tell the truth. Are you willing to listen what your Subconscious Mind will reveal to us with the use of Kineasiology? (muscle testing) Are you willing to listen to your minds history of what happened to you to put you on a detour and take you off track to success? If so , this is your "how to" manual to guide you to success in your life.