Breakfast with the Birds 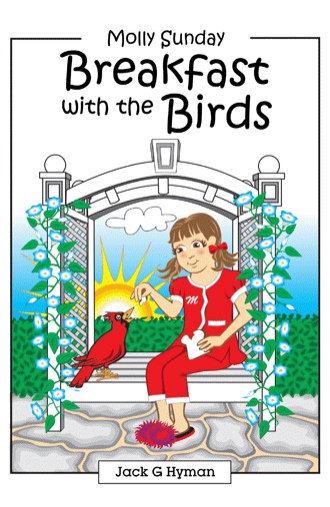 Molly wasn’t looking to have a pet. She prefers climbing trees, eating peanut butter, playing with her dolls, and having breakfast with the birds. But when her little brother thinks he hears a monster in the backyard, everything changes…including friendships. Now, Molly’s adventure with an avian friend leads not only to some discoveries about herself but also to standing in the kitchen sink, having a tea party in a tree house, holding a live bird in her hands, singing into a walkie-talkie, and eating “Oatmeal Mollerino.” She even manages to finally decide on her absolutely, positively most favorite color in the whole wide world—thanks to her special new friend.

Breakfast With The Birds is a delight! Long before I became a professional writer myself, I had a career in children’s book publishing. But I must admit … I would never be able to write for kids with the skill that Jack G Hyman so clearly possesses. This is an utterly charming read that children will enjoy experiencing and learning from, over and over. Highly recommended!
-Mike Greenly, Award-winning Lyricist, Author, Journalist, Speechwriter

JACK G HYMAN is a playwright, director, actor and teacher who has written for stage, television, and magazines. He has been a writer/performer for the long-running PBS children’s show, Bloopy’s Buddies, a freelance associate producer at ESPN, and a produced playwright on the New York stage. He is currently working on a new musical and two novels, Lady E and Muscovado (for middle grade). A former gymnast, Jack continues to teach gymnastics in his spare time. He is a graduate of Emerson College and a native Texan, now living in New York City—where he still refuses to fully grow up!