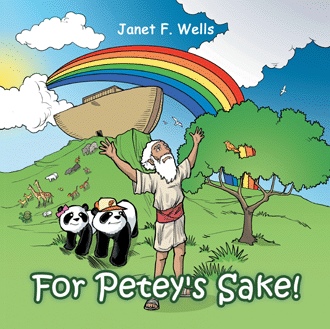 "God has chosen two very special young-ones to travel with Him on a big, big boat! The two cubs He has chosen are..." Petey held his breath. He had heard of God's great boat, or the ark, as it was called. He had even seen Noah's family from a distance, on their early morning treks to build it. Though he had not yet seen it, he had heard what others were saying.

It’s a roller coaster of excitement and emotion, as Petey Panda moves from his home in the bamboo forest to his new and very unexpected home on Noah’s ark.

Janet Wells is a retired special education teacher, holding bachelor’s degrees in psychology and sociology. She has her master’s degree in education, with lifetime certificates in elementary education, learning disabilities, and multiple disabilities. Although Janet is a first-time published author, she has a lifetime of writings that she hopes to have published in the future. Janet resides on a small farm in southwestern Missouri with David, her husband of thirty-eight years. They have three children and seven grandchildren. Besides writing, Janet plays piano for her church and enjoys giving piano lessons.