I Married an Angel, and Now She’s in Heaven 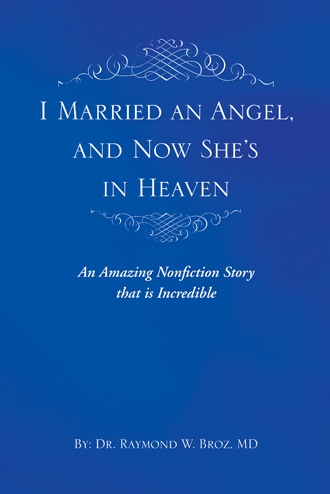 This is an amazing, nonfiction narrative of our marriage of 63 years that ended with Dorothy's death and for a short period after. It contains frequent spiritual events during our marriage and outstanding events after her death. About 4 weeks later, I heard her voice twice speaking to me. Also days later, I had eagles fly over me three times. In Aramaic, Jesus' language, heaven is described as voices and eagles, and I had them both. I believe Dorothy is in heaven. There are also several spiritual events that have occurred after petitioning to Dorothy.
Religion is my avocation, and I was an extraordinary minister in the Catholic church. Therefore I added a religious section to end my manuscript. In that section I included a modern wording to the Hail Mary prayer to make it more meaningful especially for young children.

This is a true story of my wonderful marriage, and the people involved are still alive except for Dorothy. Before I retired I was able to buy our lake home in Lac du Flambeau, Wisconsin, and Dorothy would spend summers there with our two youngest children. This was lake property ceded from the Chippewa Indians and had been owned by Dorothy’s aunt. After my retirement this became our permanent home for next thirty years. People there call it God’s country, because it is so peaceful and quiet—except in the summer with the influx of tourists. For one of the Fourth of July parades in the town, the Broz clan of about twenty joined in. With our yellow T-shirts and our family tree on the back, we all had kazoos, making music as we marched along. We won first prize. Perhaps some day we might have a St. Dorothy of Lac du Flambeau.

Dr. Raymond Broz received his medical degree from Loyola Stritch Medical School in Chicago in 1943. He is in his mid-nineties, but he is still very active both physically and mentally. He served in the US Army during World War II, as both an enlisted man and officer. He finished with the rank of captain and was awarded the Bronze Star and five other medals. He was in the first army of the occupation of Germany. He is a retired member of American Academy of Family Physicians as well as the AMA. He was on the staff of the Elmhurst Memorial Hospital for thirty-two years. While in practice, he built the Franklin Park Medical Center, which included a medical laboratory, x-ray, drug store, and other offices. Religion is his avocation. He was an extra ordinary minister in the Catholic Church, and he was also one of the original members of the Christian Family Movement. In 1964 he was part of this group that chartered a trip to Rome during the Second Vatican Council, attending mass in St. Peter’s Basilica with all the cardinals. They had to be escorted by a priest friend past the Swiss guards, and they were seated in a small section with about ten laypeople. This was highlight of his life. He also enjoys singing and is a charter member of the Lakeland Barbershop Chorus. He sang with them for twenty years. He is a gardener in his spare time as well.