The Will of Fire 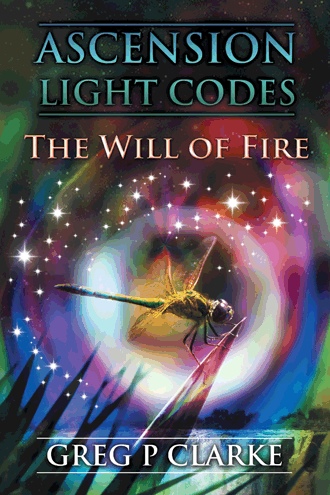 What an amazing sight to see! A divine, sacred moment indeed, frozen in time. The crowds had come from all parts of the universal sector, both far and wide. They cheered and looked up in delight whenever fireworks exploded into a symphony of streaming colours. Sweet, melodious music filled the air while celestial angels, dragons, and divine heralds flew overhead to mark the auspicious event.

Along the boardwalk in the city square, on the shoreline, and throughout the busy streets and laneways, firewalkers, shamans, and jugglers demonstrated their skills. Passers-by stopped to watch and admire them, drawn in by their magnetic powers of attraction. And merchants and charlatans, who were making the most of the occasion, were calling out and demonstrating what kinds of spiritual wares and gimmicks they had to sell.

Holy sages, saints, and priests and priestesses of all denominations and faiths were selling or telling about the sacred documents they had on display. They had documents about all manners and aspects of spirituality. An interested buyer might end up one of the lucky ones to get an authentic document telling of the spiritual history of a planet or describing a magic potion or powerful alchemical spiritual-health remedy and transformation. Others in the crowd had gathered around those who were speaking about the power of the mind, the universe, and God and how those powers could benefit people if they chose to listen to them and were willing to seek them out within themselves.

There were also many honourable, sincere, and genuine people who were spiritually initiated in a cult or service to a higher good of one sort or another. They were there to trade knowledge and wisdom and to give advice or counsel on spells or ancient texts, whose hieroglyphs and sacred symbols contained answers and lore to the mysteries of the universe—for those who knew how to read them.

Soothsayers and astrologers had their charts and spiritual tools out so that they could make predications, and they were forecasting events for when the portal would appear and the auspicious event would take place. Others were praying, chanting, telling fortunes, or dancing in ecstasy. Magicians, diviners, bodhisattvas, gods and goddesses, and empresses and emperors—and all manner of spiritual deities—mingled with the huge gathering of beings of all types who represented the many planets and galaxies of each plane of consciousness. They were there on a pilgrimage to enjoy the divine spectacle before them.

The initiated from the various galaxies were there and waiting. Those who came from Earth were some of the planet’s most beloved: Jesus, Mother Mary, Lord Krishna, Gautama Buddha, Muhammad, Einstein, Mozart, Plato, Gandhi, Kwan Yin, Martin Luther King Jr., Lincoln, Lady Portia, Confucius, Mother Teresa, Lao-Tzu, and many other well-loved ascended masters.

It wasn’t hard to see who the distinguished guests were. They had all achieved degrees of the highest honours in their department of life, with distinctions in service and enlightenment, and were wearing their ascension graduation robes. The robes of light were exquisite and beautifully designed. Each was handmade and had been fashioned by the best couturiers of the heavenly realms especially for the ascension ceremony.

Each robe had a high collar that fanned out like a king’s or queen’s royal garment and composed and enhanced the aura superbly. The fabric of light was made out of a rich sun glow. It had thick gold-coloured thread interspersed with fine threads of deep violet and snowy-pink light that started at the top and went down to the stage floor. The flowing colours of the garment then disappeared and re-formed into a pool of resplendent rainbow-coloured light. Each ascender stood at the front of the dais that had been set up for the esteemed guests of honour.

Each of the robes emitted a faint outer aura of light, and the rays shot above their heads and formed halos from the robes’ collars up, before the subtle colours disappeared into the ether.

Each group represented its planet. Illumined within each halo was a radiant white star mixed with another colour. Coming out from the centre of the star was a cross whose horizontal and vertical beams were made of coloured light, followed by a horizontal band of smaller outer stars circling the cross in a kaleidoscope of colours like a star wheel, with stars indicating the constellations of the galaxy each ascender came from.

The star pattern was the same for all of the ascenders, except for the colour infused in the white star in the middle, the colours of the light beams, and the stars that decorated the outer band of constellations.

Each haloed aura of the ascenders who represented Earth had a pure-white-and-blue spiral star in the middle; the spiritual white was a uniform colour common to all and symbolic of their identity to the universe they all came from. The spiritual blue was representative of Earth’s spirit and distinguished the uniqueness of its aura.

The four light beams that flowed out from the divine spiral star in the middle represented the galactic cross and signified the central four vertical and horizontal axis lines of the planes of consciousness of Earth’s Milky Way Galaxy.

The outer horizontal band of twelve smaller stars, each with a different number of points and colours, signified the constellations and planets of the particular star system Earth belonged to.

The heavenly stars revolved within their haloed auras like a slow-moving cosmic gyro. The ascenders put on a truly magnificent display for the occasion for all to see in the spirit of their universal identity and group unity.

They were all gathered together like one big family in a divinely supernatural place, on a sacred planet ready to pass through the galactic portal and take their cosmic ascension.

It was no ordinary portal, such as the ones commonly used by soul ships that travelled the trade routes to the faraway reaches of the planes of the galactic realms of consciousness.

This was a galactic ascension portal. These portals appeared only at certain times, when an ascension was due, and they were known across the cosmos as special gateways that became visible on the spiritual plane of a planet’s or galaxy’s planetary systems.

They marked the entranceway to the beginning of an ascension journey—a Golden Spiral route that took ascenders to the universe’s spiritual portal, which the captains of soul ships knew as the central portal, or innermost hub of a universe. Then, from this spiritual portal of the busy hub, the universal currents of the Golden Spiral route, renowned as a sacred, mystical route fraught with many dangers—and the only one that led to the top of the celestial sphere axis mundi—continued on. It took the spiritual travellers down the shipping channel and farther on through to its cosmic portal at the other end. The cosmic portal marked the entry into the twelve great cosmic streams of the axis mundi, whose primordial currents became the life forces that flowed into and out of all the universes created since time began and sustained and vitalized all the infinite life forms that made up the entire cosmic mandala of creation.

In the case of the ascenders, once they entered the cosmic flow, if they chose to, they were then taken on to further fulfilment of their evolutionary destiny to more-advanced dimensions in some other universe other than the cosmic physical plane. Their destination depended on the place their ticket listed and the passage they had booked on the galactic soul ship.

The journey is fraught with many dangers; the chances of success are slim. But the servants of the Earth spirit know that they are the only hope for the planet’s ascension. To succeed, they must find the sacred Golden Spiral and the Earth’s light codes before the scheming Destroyer does. The quest will take them to the spiritual dimensions of other worlds aboard a soul ship called Auroras, chartered by High Command.

The servants come from all different walks of life. They have been visited by the celestial spirits of their families’ spiritual DNA, in preparation for the task ahead. The group must travel to the Spiritual Emperor’s palace, and then on to Warrior Mountain, where the supreme Shakti Angel guards the sacred gemstone known as the Will of Fire.

Back on Earth, the clock is ticking. The world’s portals have been shut down by terrorists, leaving soul ships backed up with their cargo. Meanwhile, Earth’s precious resources of love—which it sells on the intergalactic markets and relies on for trade and security—have been suspended.

Only the team aboard the Auroras can restore balance to the world and prevent the Destroyer from claiming victory over light itself.

Greg P. Clarke was born in 1956 in Melbourne, Australia. After a serious accident ended his career as a carpenter, builder, and certified master of trading and fishing vessels, he took up writing. He now lives in Ocean Shores, Australia.