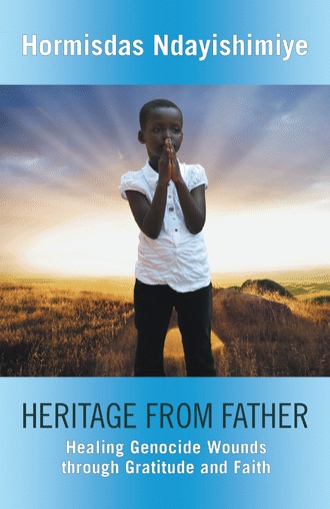 Heritage from Father reveals the importance of gratitude inspired by faith in the most difficult moments of a man’s life. From his experience, the author gradually shows how recognition expressed towards a beneficial situation is fundamental to overcome depressing situations in his own life. He also shows that when this feeling of recognition is inspired by faith in God, fighting against our daily sufferings becomes more effective and that negative values, sources of hatred and crime disappear. Otherwise, they spiral up and may culminate in such mass murder atrocities as the 1994 genocide in Rwanda. From the outset, the author was inspired by the practice of the gratitude initiated by his father after he survived by miracle the killings that targeted the Tutsi in Rwanda between 1959 and 1963. To encourage his son to a more sustainable practice of this value, he gave him a name symbolizing gratitude, Ndayishimiye or “Thanks to God.” It is a kind of heritage that later was a guiding hand in the son’s difficult route through life. Gradually, he noted that the value of gratitude, when instilled from early childhood, was extremely important in his life, particularly in the 1994 genocide against the Tutsi which claimed almost his entire family. After the horror, he realized that thanks to a series of circumstances recounted in the book, the heritage from father had definitely helped survive the genocide. The realization was a starter in his decision to share the precious values with all of mankind. The idea to write a book was almost imposed to him, as the best way to show the world the treasures behind the practice of gratitude, particularly in a post-conflict society. The author observed that hatred was propagated through negative discourse and actions before and during the genocide in Rwanda. Then, he remains convinced that nowadays, this can be reversed by teaching forgiveness, tolerance and love, through gratitude as a driving force for positive practices, particularly with the younger generations. If we compare ourselves to the genocide victims, every one of us Rwandans still enjoying the gift of life becomes a privileged person. If we are modest enough, if we try to see where we are and to remember those victims, we shall then realize how invaluable this gift is. A million Rwandans wanted to live and would not have it. Rather, they were atrociously killed, totally deserted. The author’s firm belief is that some Rwandan citizens were saved by miracle, and that this gift of God is at its highest in the peaceful cohabitation between former executioners and genocide survivors. Marriage cases were even reported between those former enemy camps. Seen from this viewpoint, these unusual facts in post-genocide Rwandan society are not the result on Rwandan determination to live only. They are also miracles that God keeps performing for Rwanda. In addition to these gifts of God, the author convincingly shows that his ethnic, national, religious or racial identity…is a gift he must use for the benefit, rather than as terrible weapons against the Other. Heritage from Father is symbolized by the author’s name: it is gratitude and faith in God. His father had received these gifts from Our Father, God the Creator of all humans. They were for the son efficient medicine for his wounds from discrimination and the genocide. The author’s positive experience through these values is his greatest gift to fellow Rwandans first, but also to every human who in one way or another suffered and is seeking integral and sustainable peace. There is no doubt that constant practice of gratitude towards God always urges him to unconditional love. He is always ready to accept any sacrifice to have his family’s killers convert. Many people assert that loving our enemies is difficult; the author thinks that it is even more difficult to hate them to the point of killing. Something is certain: it is more profitable if you are courageous enough to love your enemies. If you hate them instead, you will crop the negative consequences, which are self-reflexive.

Heritage from Father is a poignant testimony on the suffering from discrimination and the 1994 Genocide against the Tutsi in Rwanda. It is also a testimony of love, compassion and healing after the author’s parents, six brothers and sisters were killed in the genocide. In this testimony, the author highlights his awareness of God’s blessings upon him through people from different cultural and ethnic backgrounds. It is evidence that the awareness reminds him of the values of gratitude and faith instilled by his father from early age. The very values that had healed his father during the persecutions of the Tutsi in the years that preceded the horror of the 1994 genocide. Heritage from Father is also an account of how the saving hand of remembrance kept away from him the pressing need for hatred that had started to overrun him, and how it urged him to life in peace instead, with himself and with the world. This is particularly true in his personal style of forgiving the executioners of his family and relatives, in spite of their refusal to own responsibility.

Hormisdas Ndayishimiye was born in Rwanda and became member of the Rogationist Religious Community for four years. He studied Philosophy at Pontifical Lateran University in Rome, Italy; Theology at St.Thomas Institute of Theology in Messina, Italy and Social Sciences at Pontifical University of St.Thomas Aquinas in Roma, Italy. He lost most of his family during the 1994 genocide when he was in Italy. Six years later he returned to Rwanda and began work for University Teaching Hospital in Butare as Liaison Officer and Social Service Manager. Today, he is an independent researcher, member of Global Ethics Network and member of Peace and Collaborative Development Network. Hormisdas lives in Butare, with his wife Marie-Claire and two children, Davina and Anaïs.