Six Days to Your Heart’s Desire 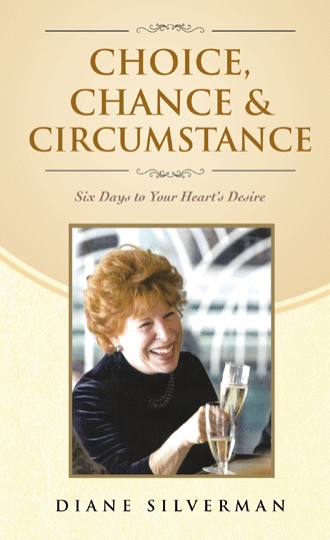 CHOICE, CHANCE & CIRCUMSTANCE
By Diane Silverman
Chapter One
What’s real ?
Homo Sapiens Sapiens, that’s us. We are the only specie on the planet that has the power of mind and free will to choose what we want to believe about everything, including who we are, what we want and what we deserve to have.
We all know that in the past, humanity believed a lot of things that later were proven false. But while mankind believed false ideas, those false beliefs controlled what most people believed was possible. People live in accord with what they believe, not in accord with what was actually real.
Thanks to those wise and brave folks who didn’t accept the false limits that most others accepted, the miracles of flight and space travel and modern e-technology, to name just a few, are no longer are considered miracles. We’ve seen them with our eyes. We’ve used them. They are real to us. The ‘how-to’ of those former wonders are taught in schools and universities so we no longer call them , “ miracles.” They’ve become part of everyday conversation and that has had the effect of giving us a greater appreciation of what man is possible of doing and having.
In recent years quantum physics has allowed us to see that what we used to believe about the creative power of our minds, has been very limited and therefore not really real. Some may say it was partly real, but partly isn’t really real.
Modern physics has shown what was never observable before about the, awesome creative power of the mind of man. We would never have come to believe it if we hadn’t been able to see it. By being able to scientifically reveal the true nature of the creative power of mind, quantum physics is taught in universities. Books have been written about it and movies have been made using the creative power of mind as the basis for their plot.
Just as riding in an airplane doesn’t require the passengers to understand the mechanics of aviation , we don’t need understand all about quantum physics or go to college to learn how to have the quality of our life experience fly to new levels of health, wealth, joy and satisfaction using the power of our minds.
Your desire to be master of your circumstances and your willingness to read and do the easy processes that will be explained to you in this book will open the door for your happiness to grow and glow. What’s really cool is, you never have to worry if wanting a whole big bunch of happiness is selfish, because it is NOT selfish. Every other thinking person on the planet can accomplish the same for him/herself. Maybe when they see your example they will realize they’ve been asking too little of life, not too much.
All homo sapiens sapiens have the capacity for using the creative power of their minds.
So let’s talk about the way to use mind to create a present and future that is waaaay better for humankind than the past has shown us. It all starts the awareness of our two very different thought systems.

Diane takes the mystery out of heart’s desires and miracles. You will be amazed at the happiness that results from following her step-by-step guidance. Make the choice to read where miracles come from and why everyone can have them, regardless of their past. Take the chance to follow the step-by-step guidance Be amazed at the happy circumstances that result Then you will know heart’s desires and miracles are available whenever you desire them.

Diane cut her “wisdom” teeth on A Course In Miracles in 1978 and went on to create the Choice, Chance & Circumstance Seminar Series in 1986. In addition to being wife, mother and seminar leader, she founded and operated a small chain of restaurants, several factories, and an international trade company. She has been executive director of two major non-profit organizations, as well a national radio talk show host.