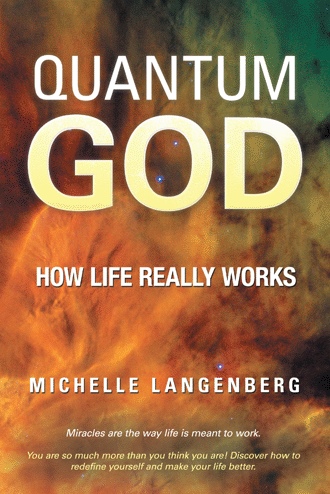 One Light Shining Everywhere
Age-old religious and spiritual doctrines of “We are One, we are all connected,” are precursors to the scientific proving of Bell’s Theorem. Like a sandy shoreline that looks solid from way out at sea, our universe is connected by a system of quanta, which close up look like minute grains of sand.
One summer I flew out to see my friend, Jody, in San Diego. I was walking along a cliff, stopping frequently for a last, longing look at the sea, when a woman came up to me. She said, “I saw you, and I was just drawn to you. Isn’t that strange?”
It didn’t sound at all strange to me. I asked her name.
“I’m Mona. I just can’t understand why I was drawn to you,” she said again.
“Doesn’t that sound strange?”
“No, it doesn't, Mona,” I said, placing my hand on her forehead to bless her.
With the waves of high tide crashing against the cliffs, I was “Connected.” I was reveling in the symphony of the sea and “flying high and rising,” radiating vibrations of joy, empowerment, appreciation, and wonder. It’s little wonder that Mona sensed our connection and felt an attraction to the aura of goodness I was feeling and more than happy to share.
~
One year I wondered what I could do for a friend who was going to be alone during the holidays. “Coco, you want to go?” The dog chuffed and sprinted to the front door. I grinned and began packing.
We left Kansas City to drive twelve long hours away. The Saturn didn’t look much like a sleigh going south on Interstate 35, but it did carry presents and chocolate macadamias. After our pre-Christmas delivery, Coco and I hit the road the next day, using the “shorter” Highway 7. However, along this two-lane route another small town always popped up as soon as we’d gotten up to speed after the last small town, with dreary fallow fields in between, and I learned I’m an Interstate sort of girl. At least my co-pilot had the chance to bark at cows all afternoon.
Six hours into the trip (after turning the wrong way and backtracking), we reached Interstate 540, but by now it was dark. The road snaked up and down mountains and spun out before us for a hundred miles. I was worried that I’d missed the connection for Highway 7 north. I wasn’t even sure what state we were in. We came to a college town where lines of traffic stretched ahead and the oncoming glare of white lights hurt my tired eyes. The streamers of bright headlights and red taillights sparkled like lit Christmas trees, but I was so weary — and still no sight of Highway 7.
After eight hours on the road, we stopped for dollar burgers. Although I felt grateful when the clerk told me we were less than an hour south of Joplin, the thought came to mind, Oh, now there’s the whole length of Missouri to go! Discouraged, I squatted in front of the counter. A little girl three or four years old was standing a couple of feet away.
“You have on a pretty shirt,” I said with a weary smile. Then I noticed the characters printed on the sweatshirt. “Do you like Cars?”
“That’s her favorite movie,” her daddy said.
I searched my mind for modern Disney movies. “My favorite movie is Monsters, Inc.”
Suddenly, the little girl stepped across the space separating us and gave me a hug, holding, holding, holding onto me. When she finally let go, I caressed her cheek and said, “Thank you, sweetheart.”
She didn’t say a word. Her daddy collected their order and led her to a table.
Before leaving with my bag of hamburgers, I stopped to say goodbye.
The man turned to his wife and explained how their daughter had hugged me. Then he told me, “She never does that — especially with strangers.”
“What’s her name?” I asked.
“Grace,” they replied.
Back in the car, I handed Coco her hamburger and marveled, “Grace embraced me, just when I needed it the most. Grace embraced me!” I laughed with joy and wonder. The light of one little girl carried us the rest of the way home.
The sun is a good way to illustrate the nature of human beings. The sun is comprised of the core, radiative zone, convective zone, photosphere, chromosphere, and corona, along with sunspots and huge flares called prominences. So too can we imagine the human with...
• a divine core or soul,
• a physical body,
• and the “shining” bodies:
energetic,
emotional,
mental,
intentional,
and the most far-reaching, the spiritual body.

Anxiety might be represented by sunspots, and the individual effects of self-will (blessings and curses) act like the far-reaching flares called solar prominences. Such a flare, carried by solar winds, could knock out all the Earth’s electronics in a huge electromagnetic pulse (EMP).
The following meditation is one that will help us feel enlightened, empowered, and expansive. We begin with the image of a light within our heart…fueled by Life Force. We let the light grow and allow this living, throbbing life force to radiate outward until it surrounds us. Now imagine the light expanding until it has surrounded home, community, country, planet. Eventually, the light expands until it has grown as large as the cosmos; living inside it are the stars and the birth of stars. In this Tibetan practice of light-meditation, we intend to project this light energy into the surrounding space, and will it to radiate the energy of compassion to all corners of the cosmos. As quantum physics has shown, there is no doubt that the grace of intentional-light touches someone, something, somewhere.
More power to the power of one!
~
What happens when you ask yourself: “What if I were the Messiah? What if I were a Christ? What if I’m another Buddha?” Maybe your ego rears up and cries, “No way!” That’s not surprising. We have learned to regard ourselves as small, weak, and helpless. We have let the ego do for us what it believes is a favor, keeping us safe by keeping us in a rut. Even if the rut has led to a hell. Even though one step forward may be, if not heaven, at least not quite so dark and solitary. Where we are and who we (mistakenly) think we are seems safe because it feels familiar. It’s our comfort zone. But this small self is not where we have to stay or who we must remain. One person can shine like a sun in the dark throes of a storm.

If Quantum God were a Who, God would not be the judgmental, biased, and sometimes malicious Old Man in the Sky many of us grew up with, but rather the All where everything is possible and pulsating with potential. If Quantum God were a What, God might be the fabric that connects every idea, every desire, every personality, and everything in a pulsating, energetic, ever-Becoming Whole. If Quantum God were a Where, God could be the Higgs-Boson “God Particle” upon which angels dance or an “everywhere” with ever-burgeoning dimensions well beyond our comprehension of the universe as we know it. If Quantum God were a Why, God would exist because creativity cannot be contained or restrained, but seeks free-flowing expression, expanding in waves and ripples of idea-become-event. Yet Quantum God may be most like a How—the how behind everything we know and “laws” we can only guess at, the how that lays the groundwork for miracles as commonplace occurrences and composes a theme from the frequency (or vibration) of joy. Quantum God: How Life Really Works sheds light on the misconceptions that limit us and offers insights that can free us to be the true powers we really are, seemingly magical beings who create with godlike abilities. When we understand the invisible workings of the universe, we stop being victims of creative laws we don’t understand. These laws rule our lives, whether we comprehend them or not. What could we do if we understood them? Is there anything we could not do? Miracles are the way life is meant to work. Quantum God tells about how we shortchange ourselves, our true creative potential, how our hopes and dreams, fears and feelings of inadequacy create our experiences, how to rise out of depression, victimhood, and blame to find joy and peace, how to believe in ourselves and live with confidence and optimism. You are now what you think you are — but you’re actually so much more! You can become whatever you believe is possible. Learn how to redefine yourself.

Michelle Langenberg is a prize-winning poet, editor, artist, teacher, Alzheimer care provider, and Master Reiki healer. She graduated from the University of Iowa with a degree in Latin, but prefers comic crime, Harry Potter, and Vivekananda to Cicero and Catullus. She loves the song of the sea, and dreams of living in a bungalow that glows with love, laughter, and blessing.
She has been published by Chicken Soup and The Kansas City Star, and is author of The Painted Bible; Portraits of a Poet; Wherever We Are . . . Unity; You Won’t Always Be Little, Tad (children’s picture book); The Book of Great Beginnings: Two-hundred First Lines to Give Writers a Running Start, the manuscripts, Lessons from the Brick Wall School and Integrative Health Guide, and two screenplays looking for a producer. She is an INFJ who does not have a pet named “Schrödinger’s Cat.” She lives by the Law of Kindness
and believes that “we are so much more than we think we are.” Her website address is www.langefinearts.com.