Through the Mediumship of Terence Michael Hamilton-Morris 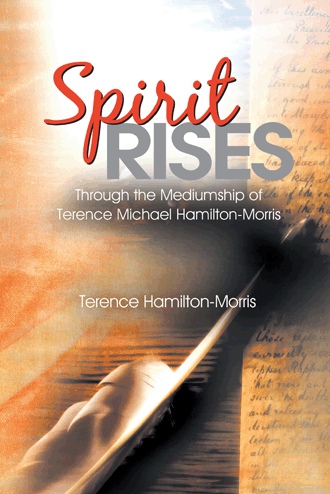 I have written this book so that everyone will understand that they are also Spirit and that every human being is important to this world, regardless of their beliefs. The book is based on talks that were given through me over the period of two years, about 170 in total, half of which are now in this book. Some of them were given by Spirit guides who always work through me; others were given by other Spirit guides who wanted to talk about their last human life and what we can learn from their experiences. The subjects of their talks should overcome any doubts you have regarding life and the hereafter.

They talk about what happens to you after the human death. The lessons of a person’s life and whether you pay for your bad deeds in this life or in another. They talk about forbidden subjects such as incest, abortion, euthanasia, suicide and homosexuality which some of them experienced in their last human lives. They talk about our world, about their world and about religion; one who lived in Atlantis talks about her life before and after the disaster that happened to her world.

In the world of Spirit there are no language barriers whatsoever. A Spirit who was Russian in their previous life, and has never known any other language, can talk through a medium who only understands the English language. Spirit will use the mind, the body, the voice and the language of the medium in order to talk.

I do not want to die knowing that I never gave my all regarding the truth about Spirit, the human being and life after death. I believe that whatever you learn in this life should be for the benefit of all human beings, not just yourself.

What possessed me to write this book?

Many people have asked me, why did you write this book and what set you off on such an enormous quest? I didn’t ask for it; I was just told to do it.

In June 2006 I was 64 years old and living in the Perth Hills in Western Australia. From Monday to Friday, I used to drive another to the Woodside Plaza in St George’s Terrace in Perth. After dropping them off, I’d have a cappuccino in the Coffee Pump, inside the Woodside Plaza, before driving back home.

The following morning my passenger asked me, “Why are you taking your laptop?” I replied, “Because I was told to”. I dropped them off at the Woodside Plaza and went into the Coffee Pump for my regular cappuccino.

I sat down and opened up my laptop and switched it on. There I was sipping on my cappuccino waiting for something to happen. I thought to myself: well, what am I supposed to do?

It was then that I got the message from Spirit: “Just start typing.” Now you have to understand: I can only type with two fingers and I never know what to write. But then I got told: “Why not just start typing about where you are now; your surroundings?” So I did; and this is what I typed:

Today I am sitting in the Coffee Pump cafe in the city of Perth, drinking a cappuccino, and wondering: what am I going to be told to write about? With this thought in mind, I am watching the people going to and from work. They all seem to be wearing dark clothes and have gray faces. I know it’s raining, but I don’t see one person with a smile on their face; they all look like their morning is downright miserable. These people are walking past each other and not one of them smiles at anyone else. You might say that they have nothing to smile about; but I say, “Yes they have: they are alive and they appear to have all their faculties about them. They are healthy, they can see with their eyes, they can feel with their hands, they can walk and talk. How lucky can they be? When are you going to stop feeling sorry for yourselves and start to enjoy the life you have?” And that was when the Spirit of my mentor joined in:

Life’s most profound mysteries have inspired great thinkers throughout the ages, but few answers have emerged to address these major questions: Why are we born? What is the meaning of life? What happens to us after we die? Is there life after so-called human death?

Can we ever hope to have the answers to these important questions? Even the pursuit of answers stirs up controversy; some say that the questions themselves are more important than any answers that might be shared.

Author Terence Hamilton-Morris, a clairvoyant and open medium, offers his insights into these unanswerable mysteries. His approach is controversial, enlightening, and confrontational. He invites us to look at these questions from a broader spectrum of possibility and encourages us to look more intently at subjects that we are often instructed to ignore. He challenges followers of all religions to be truthful to their original teachings. He stresses the importance of discipline, motivation, and respect for others, and he hopes to inspire us to take better care of our environment.

Hamilton-Morris has called upon a veritable panel of experts from the spirit world, each of whom has chosen to share their experiences, insight, and teaching from beyond, based on their own experiences from their time on Earth. Compelled to share this story by his personal guides because of his extraordinary relationship to the world of Spirit, he wants the world to be able to reach what Spirit demanded of him.

Terence Hamilton-Morris has spent more than half of his life working as a clairvoyant and open medium, working with Spirit. Now in his seventies, he is a teacher of psychic development, a healer, and a lecturer on the world of Spirit. He currently lives in Australia.