by Elizabeth Spanton, Illustrated by Faern Montgomery & With Laren Bright 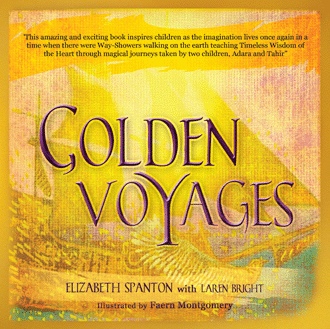 Chapter I
The Mysterious Ship Arrives

High above the sandbar, Tahir, and Adara looked through their binoculars. They were watching a mysterious Golden Ship, shimmering as it moored once again in a cove on the far side of the island. Skipper, their puppy, barked excitedly.
How they longed to investigate this mysterious, beautiful vessel. For days, as the ship arrived each morning, Tahir talked about exploring it. But he hesitated. It meant taking his sister who was always in his care. And that, for Tahir, was a problem.
It was not at all a problem for Adara. As far as she was concerned, there was no way she was going to be left behind. Since the ship first appeared she had been trying to convince Tahir she could handle anything he could. Their parents, of course, were unaware of the ship as they were very busy with their work. They were always gone when the ship arrived, and there was no way they could see it from the lab where they worked because it was well inland. The children had started to mention the mysterious vessel to their parents several times, but somehow something always seemed to come up before they could discuss it.
Though the ship had been coming to the island for nearly a week now, the children had not tried to get closer to it. Today was different. After some last minute hesitation, Tahir finally relented. His own curiosity and Adara’s constant chattering about visiting the ship had worn him down. With a sigh, he had agreed.
The noonday sun shone brightly down on them as the two children took their bicycles along the path leading to the cove, Skipper happily following along.
When they reached the shore, they found a rowboat tied by the dock. Bobbing gently, it seemed to be beckoning to them to climb aboard. Before Tahir could say anything, a smiling Adara had taken Skipper into her arms and carefully climbed into it.
Shaking his head at his sister’s eagerness, Tahir climbed into the boat and settled himself behind one oar. “If you insist on coming then you get to do some of the work,
Adara,” he said pointing to the oar next to him. As Adara moved to the seat beside Tahir, Skipper scampered to the prow of the small boat, as if to guide their way.
In no time they were cautiously approaching the ship. Tahir pointed, “Look, there’s a rope ladder,” he whispered. “Let’s anchor beside it. Try to be quiet!”
As their boat glided next to the golden vessel, Adara dropped the anchor into the crystal clear water and moved toward the rope ladder while holding on tightly to Skipper.
“Not this time, little sister,” Tahir smiled. I’ll go first.” Adara rolled her eyes but waited until Tahir was moving up the rope ladder before she followed.
As they climbed onto the deck, Adara looked around. “No one’s here,” she whispered.
They walked quietly around the spacious deck. With each step they felt more and more as if the ship was safe, almost friendly. It was so clean it fairly sparkled.
Suddenly a sound caught their attention. Adara whispered, “That’s coming from over there,” she said as she pointed to a structure on the deck only a little above them.
Tahir nodded. “Looks like it might be the Captain’s quarters.”
Cautiously, they walked up the stairs leading to the upper deck. As they neared the cabin, an inviting whiff of fried fish wafted out as the door to the cabin opened. Startled, Adara moved back knocking into Tahir who had been protectively holding her hand. Skipper barked.
“Hello, Tahir, Adara, I’ve been expecting you. Welcome aboard!” a deep, friendly voice addressed the children.
Puzzled, Adara and Tahir looked up. All they could see was an arm, waving and inviting them to come into the cabin.
Adara’s eyes narrowed and, picking up Skipper protectively, she called out, “Who are you?”
The mysterious voice chuckled. “I’m the answer to your puzzling thoughts and heart’s wishes,” it responded. The children looked at each other but were hesitant to move forward.
“I’m glad to see you have listened well to your parents about being careful with strangers,” the voice said.
“But… you don’t seem like a stranger,” Adara said, surprise creeping into her voice. Tahir nodded his agreement. “And there’s something about your ship that seems almost familiar.”
This time the voice laughed out loud. “Noticed that, did you? Well, you’ll find out why in time.”
Before Tahir could say anything else, Skipper squirmed, then jumped from Adara’s arms, and dashed into the cabin.
Without another thought, both children raced after their puppy. “Don’t hurt our dog, sir,” Tahir cried out. They could hear Skipper barking excitedly. Bursting into the cabin they were greeted by a surprising sight.
Inside the cabin, a large man with white hair and a short white beard was laughing and holding Skipper at arm’s length. The puppy was yipping and enthusiastically trying to lick his face. The two children could only look on in dismay. “He acts like he knows you, mister,” Adara said, stepping into the cabin.
“That’s not surprising,” the man said with a chuckle as he handed Skipper back to the girl.
Tahir reached out to pet Skipper, secretly checking to make sure the dog was not hurt.
Chuckling again the man said, “I can assure you he’s just fine, Tahir.”
Tahir quickly put his hand back at his side. “I know. I mean, well…”
The man laughed again and said, “It’s good to know you take such excellent care of your friend…and your sister, too.”
Adara frowned, saying, “He doesn’t take care of me. I take care of myself!”
The man put his hands out in front of him as if protecting himself from the strength of her response and nodded gravely. “You’re right, Adara, I apologize. Maybe I should have said I’m pleased that you both take care of each other so well.” 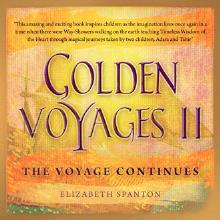 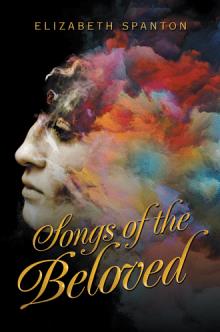 Songs of the Beloved
Elizabeth Spanton
£10.95

Everything changed when the beautiful, golden ship sailed into the bay.

Who is this mysterious captain, with his heart-melting smile? What is the secret of his mystical white owl with golden eyes? Where did they come from? Where do they go? And how can their sailing vessel whisk us away through time and space?

Meet Tahir, Adara, and their pup, Skipper, as they embark on magical adventures to ancient lands, where they encounter teachers of timeless truths. Join their quest to become Wisdom Keepers. And discover how lives can be changed forever!

Elizabeth Spanton loves children. Her career spans five decades of educating young minds and inspiring young hearts as a teacher, school principal, and curriculum designer. She has dedicated herself to the study of the world's great master teachers, and her aim is to awaken children to their own natural wisdom.

Laren Bright is a three-time Emmy-nominated award-winning writer with over one hundred animated television children's stories to his credit. He has worked on numerous shows, including the acclaimed New Adventures of Captain Planet, featuring the world's first environmental superhero. Laren's philosophy is: What we can inspire the children to believe is what the world will become.

Artist Faern Montgomery has been painting since she was old enough to hold a brush. Ancient motifs frequently take shape in her paintings, and she adds her perception of beauty that reflects the joyous revelation of the Light and Spirit within her. She lives in Santa Monica, California.