On Earth … as It Is in Heaven 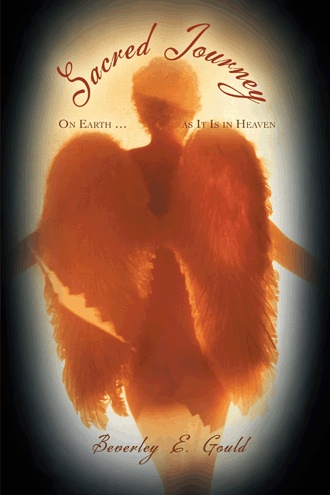 SACRED JOURNEY BEVERLEY E. GOULD Reverently Lucia bowed her head in silent agreement...”Thank you, Beloved Father, I will do your will to the fullest of my understanding” “Dearest child, I cannot ask for more.....go with the knowledge that you are surrounded constantly by my love and the tender care of a host of Angels. You are so deeply loved and I will be continually watching over you. Don’t ever forget that my precious one.” “Thank you Father”, she whispered softly “I will not forget”. Lucia’s thoughts took her back in time, back to the day her spiritual parents in her family of Light had taken her aside and gently told her what was to come. It had all seemed so easy, so natural. She had listened to their words with a degree of excitement and adventure. The challenge was magnificent...and she was thrilled that they thought her worthy. And she would be going with her spiritual brother, David, so she would not be alone ! They were Soul mates…Twin Souls. They shared the same thoughts, together they could accomplish anything ! Anything ! Oh, what a marvellous journey to undertake ! Lightheartedly Lucia wound her way through the woods that surrounded their home, until she came to the ivy covered walls that encompassed her brother’s secret place. She knew she would find him there. He liked to be alone, especially when there was much to think about and absorb. Quietly she pushed aside the climbing ivy and ferns until she found the secret entrance, the entrance to their own Secret Garden, their own special enchanted place. David had created it first, for in the world of spirit which they inhabited, anyone could create anything they wished.....just by thought and visualization. It was easy, and natural ...all you had to do was carefully build it in your imagination, mentally locking it in as you went, and whatever you had created became a reality....for as long as you wished to hold on to it as a reality. At their level of heavenly community everyone was on the same wave length and shared these abilities. Whatever they decided to create was respected by all. They understood that they were all One, all members of the same body, and whatever happened to one impacted on all. For them, the common good was of utmost importance. They called their Heavenly understandings “The Way of Love”. Serapha, her spiritual mother in their Family of Light, had explained it to her once. It was like music, she said, everyone has their own particular resonance or soul note, you are just vibrationally drawn to your own particular harmonic resonance. Our harmonic was high C trebled with E, which had not only a colour spectrum frequency but also a light wave frequency, as did all the others. Each level of spiritual awareness had its own harmonic. You could move up and down the scale according to you own level, but you could not proceed to higher and finer levels or octaves until you had earned the privilege of that frequency. Or, if you wanted to look at it another way, whichever level of spiritual awareness each soul had reached at the end of each earth lifetime had a corresponding level of spiritual awareness in the heavenly realms. After death each soul just naturally resonated to their own particular level and therefore everyone was in harmonic accord. Lucia remembered that she had had to present herself to the Council of Review once she had rested after each journey. Here she was shown a selection of the experiences she had undergone and how her actions had affected others. The ramifications were huge. Like a stone thrown into a still pond causing ripples in ever widening circles, so were the effects of every action, every word spoken, for good or ill. Life on the broader view, the heavenly view, was all about cause and effect. As you sow, so do you reap. Sow loving kindness and you reap loving kindness, sow pain and suffering and you reap pain and suffering. This was an immutable law. Whatever you set in motion returned to you, in some way, so that you could experience it in your mortal life. Either in your present incarnation or some future one. You could either choose to learn from that and keep on “The Way of Love” or keep on going down your own path. There was no heavenly judgment, Planet Earth has always been a free will planet. However your own soul self knows the difference and always has a yearning for the Light. It was a wonderful life being back home in the heavenly realms. Initially it was bliss just having a chance to rest from your earthly labours. Even better was the delight in meeting up again with old friends and loved ones and sharing their experiences. Each homecoming soul was given spiritual parents who cared for their well being and spiritual growth. It was such a nurturing time, surrounded by the warm pink/gold pulsations of unconditional love and acceptance. You felt as though you never wanted to leave. Then, eventually, after you had evaluated your recent earthly life and weighed up all of the ramifications and value of your past actions, it was time to move on to other interesting pursuits. Depending on your own choice you could partake of any activity that you enjoyed. Yachting, rock fishing, stream fishing, swimming, picnics, gourmet cooking, sewing, gardening, card playing, making and enjoying wine and so much more. The list was endless. If you could conceive it you could create it and of course there were always plenty of friends to share in the fun. For Lucia it was time to go back into the great Halls of Learning.

Lucia was in awe of her new afterlife in the heavenly realms. Serapha, her mother in the family of Light, has prepared her for her new experience on Earth and instructed her on her responsibilities as an ancient soul in new flesh. She is now ready to return to Earth with a pure understanding of how her actions impact others, for better or worse. Joined forever with her spirit brother, David, they are ready to do their part. Each is humbled and exhilarated for what is to come next: a new life, in a newborn’s body, back on Earth.

As they struggle to adjust to their new reality, with all of its pleasure and pain, delight and despair, and love and fear, they find comfort in the knowledge that they are truly serving the Creator, the God/Goddess/All That Is. They know that they are both guided and guarded by a host of angels and that they are bound to service to this higher purpose.

Armed with the gift of free will, Lucia and David must now make a crucial decision: Will they choose, of their own volition, to risk their sacred journey to help bring the Light to their fellow travelers and remind them of their own heritage—or will they make a different choice?

Beverley E. Gould’s life changed after a near-death experience during the birth of her youngest child forty years ago. Encouraged by Spirit, she is a committed Christian and student of theology, ancient wisdom, comparative religions, and New Age spirituality. She lives in Melbourne, Australia, with her husband and youngest child.