The Ever Deepening Realization of Presence in my Life 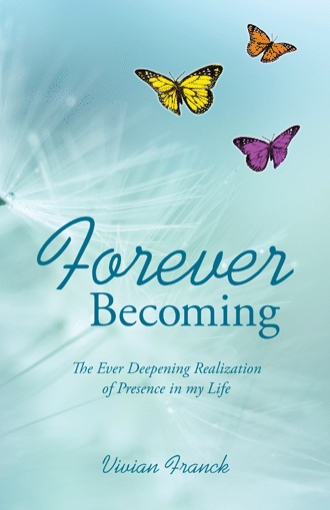 Some kind of visitation happened to me that was out of the ordinary when I was about five years old. I was walking home by myself on my street one day, simply enjoying beautiful nature all around me. There was nobody else in sight. All of a sudden I felt myself being lifted up and embraced and held close in the bosom of a Father-figure of some sort. I had a few moments of intense joy and peace and then quickly rejected it. Who did I think I was to have such an experience? How could I speak to anybody at home about this? Nobody would believe me . . . or perhaps my mother would, and she'd make a big fuss about it, which I absolutely did not want. Even at that early age I knew I could not confide in my mother or anybody else. There was no way I could accept this moment of intimacy with what I now know to be the Divine. The following year the same thing reoccurred at about the same place. This time I refused the experience outright. I wasn't about to risk going with it; it was just too strange and unusual.

When I was eight years old I was scheduled to have an appendectomy at our local hospital. On the eve of the event my mother came into my room and asked, "Are you afraid?" I had not thought of being afraid, and I simply smiled. (One never said "No" to my mother.) She took that as an affirmative and said, "If you promise God to become a nun, then everything will go all right tomorrow," I remember feeling deep resentment that she would impose this on me . . . Then she turned around and walked out of the room. this short encounter defined the form of my life for the next forty-two years. From that day on my mother always talked of me or introduced me as "the one who is going to become a nun."  She would never let me forget the "promise" I never made.

In my third year at the home, I went down to the chapel one day to pray the stations of the cross, to try and find some kind of relief from the scruples and confusion that were threatening to overwhelm me. I felt I was literally on the edge of an abyss and about ready to fall in . . .

In those days when one joined a Community, one was taught prescribed prayers. You said certain prayers as you woke up, as you put your clothes on, before doing any reading, before meals, etc. So this particular day I had every intention of saying the standard prayers for the stations of the cross as I went from one station to the other.

But this time, I suddenly received the direction to say at each of the fourteen stations these simple words: "Jesus loves me!" As I went from one station to the other, unbelievably, the words became more and more real to me, until, when I got to the last station and knelt at the altar rail, the whole chapel was filled to overflowing with the all-encompassing, palpable, love of God. I was surrounded and wrapped and enclosed in this amazing divine love. And then . . .

This book is about my life-long search for spiritual meaning, truth, and freedom. Raised during World War II within the confines of an all-Catholic town in Northern Maine and within a community that kept an ever-vigilant watch over the words and actions of its children, this quest for enlightenment did not start easily. Led by fear, my parents imposed restrictions on their offspring according to their own blind acceptance of whatever words came out of the priests’ mouth. Born with a strong will and a propensity to rebel, I was pressured by my religious parents to choose the convent. Strangely enough, becoming a nun was the only way I could have come to the freedom that I craved. Had I opted to stay in the world and marry, I would never have had the deep realizations I awoke to through the wonderful retreats and experiences I enjoyed. Upon returning into the world I was then ready to absorb the teachings of enlightened spiritual teachers who came my way. Only by traveling this unique path have I confirmed a deep knowledge inside my own soul: Our God is a God of unconditional love, peace, and joy, which he liberally bestows on all his children for the asking.

“Franck delivers an honest view of life spent behind convent doors and her narrative about the mystical experiences she’s had will leave you feeling inspired.”

“An inspirational story of a truly spiritual life lived with a willing sense of adventure and exploration in the Now.”

Martha Fenton: A Hospital for Maine: the History of Maine Medical Center.”

At age eighteen, Vivian left her home to become a nun in a French Canadian Order. After thirty years of living as a nun, she realized it was time for her journey to begin in the larger world and left the convent. She hasn’t regretted her decision once.