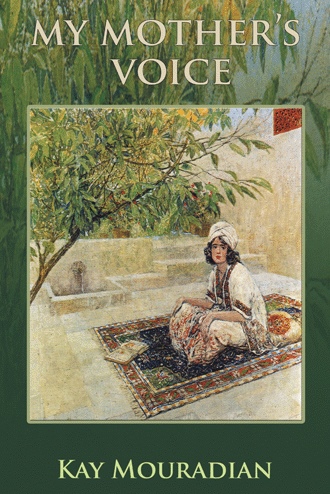 In My Mother's Voice, Kay Mouradian has vividly fashioned an important historical novel as well as a dramatic documentation of the brutal turmoil experienced by the author's mother and family during the attempted genocide of the Armenian people by the Turkish government in the early years of the 20th century.

Because the details were vividly drawn from experiences of the author's mother, Flora, this is a compelling story of one family's survival against the horrors of genocide--uprooting, killings, forced death marches. And it has the intimacy and dramatic thrust that compels the reader to turn pages as in any well-done novel. Frightening and moving, the plight of the young protagonist is balanced by heroic measures, and in the end is an uplifting celebration of survival made possible by determination and love.

But more than an inspiring family saga, the story of the struggle of Flora, her parents, and siblings is an important documentation of the horrific events that have touched the history of every living Armenian. This is a beautifully written and well-researched novel and an inspiring celebration of one family's survival and the indomitable resilience of the Armenian spirit.

War was scorching the edges of Turkey.
Six months had passed since Turkey joined Germany and Austria in the Great War, but in the isolated mountain town of Hadjin life had not much changed.
The days were still peaceful.
The winter snows had melted, dirt roads were soft and muddy from an early spring thaw, and old men still met in the local coffeehouse, their exuberant voices calling out shesh besh as they tossed dice on backgammon boards.
Hagop Munushian enjoyed relaxing over coffee and playing backgammon with his business partner Nubar. It was friendly competition. Nubar had won the first two games and now Hagop saw his chance for a win. Adjusting the red fez covering his bald head and needing a six and a five, he threw the dice against the pearl inlaid board and double sixes fell.
“Ohh!” Nubar groaned as his eyes met those of his opponent.
Hagop’s eyes were dancing with laughter.
“I see Flora,” Nubar responded as if he refused to give Hagop the satisfaction of the win.
Wiry, small and skinny, Flora’s long, brown pigtails were slapping against the empty leather water bag strapped to her back.
“She’s a whirlwind of energy,” Hagop said and watched her walking briskly toward the stone fountain in the center of the square. That was her daily chore...to bring home the sweet mountain water that poured continuously through the fountain. Hagop tried not to favor any of his children, but Flora, his fourth child, carried a special place in his heart.
He looked beyond the scene, upward to the huge American missionary compound where Flora attended school. Built on a rockbound plateau and framed by the Taurus Mountains, the site stood like a beacon whose rays shined with the promise of America.
But it was those craggy mountains jutting high into the sky that Hagop loved. As a young boy he had hiked in those mountains with his father. Now he was the father caring for his family and teaching his own children about life.
He had a summer home and a vineyard in those mountains, a refuge from his smelly, dirty, but profitable tanning business. Summers were his delight, high in the sweet air with his wife and mother, his five sons and two daughters.
Summers were happy times, and six weeks from now he and his family would be in those mountains working the vineyard--picking and drying grapes into raisins, storing packs of salted leaves for the winter months and drying grape juice into sweet tasting fruit leather.
He smiled, thinking of his children crushing the grapes for wine, purple-footed and making a silly game of it. Scamps, every one of them, except for Verkin, his beautiful elder daughter who had a kind of womanly dignity that kept her aloof from child play. She was very different from Flora who stomped on the grapes with gusto, always trying to out do her brothers.
Flora did not come into the world easily. Five weeks premature, she almost did not survive. It was in the first year of the twentieth century, on the sixth of September, when she was born.
His mother, Shushan, had delivered the new addition to his growing family. "A vision," she had said, her eyes widening as she handed him his newest daughter. "I see many gifts coming to this child, some in the sunlight and some in the shadow, all showering down from heaven."
Having heard his mother's prophecies many times before, Hagop paid little attention to what she had said. He wrapped a blanket around his tiny daughter and handed the swaddled infant to his wife, into her outstretched arms. "She's frail, Arpi," he said, "like a delicate flower."
Arpi placed her new daughter to her breast. "Flora. We should call her Flora."
In the days that followed, Arpi's milk ceased to flow.
Hagop's mother who understood healing ways said, "Nour, pomegranates. The child needs juice from pomegranates."
As if lovingly tending to a sick bird, Hagop had fed his tiny daughter drops of an elixir he had made from pomegranates. It saved her life.
His pleasant reverie ended with a clash.
Dust spiraled upward as a soldier on horseback galloped into the square and pulled up short in front of the bakery. Turkish soldiers were a common sight lately, but there was something unusual about this one. He dismounted, strutted toward the small wood-frame building and clutching onto a sheaf of paper, he nailed the paper to the wall, remounted his horse and sped away.
"Something's happening!" Hagop yelled and bolted out the door. A dozen eyes followed him. Chairs screeched and backgammon boards flew. Everyone was running toward the bakery.
Hagop raced past them. His heart pounding, he scanned the proclamation.
ATTENTION ALL ARMENIANS
ALL ARMENIANS WILL BE MOVED TO THE INTERIOR UNDER ESCORT OF THE TURKISH ARMY. BE PREPARED TO LEAVE WITHIN FIVE DAYS.

YOU MAY TAKE ANY MOVEABLE ITEMS WITH YOU BUT YOU ARE FORBIDDEN TO SELL YOUR HOUSES OR LAND. ALL WEAPONS MUST BE TURNED OVER TO THE GOVERNMENT.

THOSE THAT REFRAIN FROM LEAVING OR TRY TO HIDE WILL BE SHOT.

There was much, much more. The bold, angry words momentarily paralyzed him. He could hardly breathe. He looked at the ashen faces around him and saw shock, disbelief and panic.
Flora was racing toward him. He reached for and grasped her small hand. It was cold. Holding her close, he tried to ease her trembling body.
“What will happen to us?” The thought raced in Hagop’s mind over and over.
The damn war had come to Hadjin.

To view the official trailer of the award winning documentary My Mother’s Voice, please follow the provided link.

Researching through volumes in several libraries and archives in the United States, author Kay Mouradian visited the village in Turkey where her mother and her mother’s family, along with twenty-five thousand other Armenians, were forced to leave their homes. Traveling over the same deportation route to the deserts of Syria where more than a million Armenians perished, the author became acutely aware of the suffering of her mother’s generation and the lingering sense of injustice they carried. Like the 6 million Jewish people lost in the Holocaust, Armenians lost an incredibly vibrant, successful, and valuable gene pool of more than a million as a result of the Armenian genocide. This story of fourteen-year-old Flora Munushian, the author’s mother, brings an epic chapter in Armenian history to life and takes it to heart. Flora’s incredible story honors her people with dignity and personifies the human spirit of hope, love, and justice. Flora’s voice is that of all the victims and survivors of the Armenian Genocide, a story that must not be forgotten. “I am my mother’s voice,” says Dr. Mouradian, “and this is her story.”

KAY MOURADIAN, EdD, is a documentary filmmaker and author of previous books on yoga and meditation. A Professor Emerita in the Los Angeles Community Colleges, she holds a doctorate in education from Nova Southeastern University and degrees from Boston University and UCLA. Her documentary, My Mother’s Voice, is based on this book and its predecessor edition, A Gift in the Sunlight.