Is Everything We Think, Believe, and Perceive Real—or Is It All Imaginary? 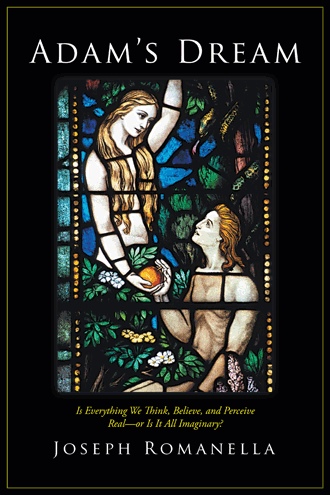 Although many of the spiritual inspirations and revelations in this book are supported by Biblical quotations, it is not meant to be read by Christians alone, because they offer a direct means for people of all backgrounds and creeds to jubilantly know, who they truly are and gives them the wherewithal to tap into the Amazing Grace GOD has ‘in store’ for humanity. Consequently, this Knowledge is worth more than the whole outside world to each one of us, because if truth be told, what we can normally see on ‘the outside’ through our physical eyes is really only an illusion, because it occurs in our minds or mental perceptions.

To arrive at this particular understanding, I have had to travel along many different religious pathways and although some of them may have appeared to be very promising at first and offered to provide me with definitive answers to my nagging existential questions, they often fell very short in that regard. Some of the religious leaders I met on my quest for Truth had missed the mark entirely and were just as deluded as I was at that time. What’s more, they doggedly followed their traditions and had clearly conformed to the ways of the world, often making their bombastic explanations rather blurred and incongruous.

Nonetheless, because of that exposure, I now find that I can confidently point-out the biggest deficiencies in the doctrines of world’s mainstream religions, because sadly, those errors and fallacies are inherent inside of all human hearts and minds. So, although throughout the ages, countless numbers of seekers have tried to find this Ancient Wisdom, they were often left very disappointed, as they could not see past the dust that was in their own eyes, which distorted their thinking, feelings, perceptions and beliefs. Even so, during these ‘end-times,’ I believe that this Knowledge is bubbling-up inside of many believers around the globe and is being made available publically, in order to uplift human consciousness. - For this reason, I also believe it heralds the second coming of the Saviour to the world.

Lamentably, the quandary of human existence has historically been a very tragic one, because it has often involved much toil, hardship and the certainty of a personal death. For that reason, I am compelled to share this Holy Knowledge with anyone, who thirsts for it; however, in taking into consideration the different backgrounds of potential readers and to add credibility to my own spiritual revelations and inspirations, I have assiduously included numerous quotations from the Scriptures of the mainstream creeds and from other credible sources.

Even so, I must emphasize that this Holy Knowledge is ageless and is not of my making and what is even more remarkable, It is inherent in all human hearts, but remains in a latent and abstract format, until such time as it is stirred-up by hearing and applying one’s faith, on the Spoken Words of God: – “He who believes on Me, as the Scripture has said, "Out of his belly shall flow rivers of living water." (John 7:38)

That's why, man has been repeatedly instructed to ‘repent’ or ‘to completely change the way that he has been accustomed to think, believe, speak, perceive and do things,’ by applying his heartfelt faith on whatever GOD has Instructed mankind to do or not do, throughout the ages. In that manner, believers can discover what the Creator’s Will is for them, while living in this earthly existence: “...Do not be conformed to this world, but be transformed by the renewing of your mind, in order to prove by you what is that good and pleasing and Perfect Will of God.” (Romans 12:2)

Remarkably, when that Living Water (Knowledge of Life) starts to spring-up from inside a believer’s subconscious or soul; It will also bring him or her the Joy, Understanding, Righteousness, Faith, Peace and Love of the LORD, to transform him or her from inside out. In this regard, Scripture declares: “…That’ which is Known of God is manifest in them; for God Manifested ‘It’ unto them.” (Romans 1:19)

As this book is about conveying Truth to all people, for the purposes of liberating them from their painful self-delusions or personal existences, I have ensured that this work did not develop into a religious exposé per se, as that would have severely hindered its ability to bridge the ‘apparent gap’ between conventional and scientific thought and between the diverse doctrines of organised religions in this world.

So, brace yourself for this ‘exhilarating ride,’ because although these ancient truths can be paradoxically, very dazzling and exciting they can also be rather disturbing and perplexing at first. One of the close apostles of Lord Jesus made a similar statement in this regard: - “Let him who seeks, not cease seeking until he finds, and when he finds, he will be troubled and when he has been troubled, he will marvel and he will reign over all.” (Gospel according to Thomas)

A few years ago I heard a small, but very penetrating voice speaking to me from deep inside of my being and at first, as it was totally unexpected I was a rather perplexed. Yet, it proceeded to distinctly ask me the following question in all gentleness: “Joe, will you bring My people back to Me?” There was an indescribably humility and beauty in that tone and I quickly realised the voice belonged to the Lord of Creation and what was even more amazing to me, is He had addressed me by name. Then, as my heart began to melt and my eyes swelled-up with tears of joy, I quickly responded; - “Of course I will; anything for you my dear Jesus.”

Little did I realise at the time that the Master had unlocked many of the hidden meanings in the Holy Scriptures to edify me and I was also meant to use those weighty and marvellous revelations to help free, heal and enlighten other people. Many profound spiritual experiences followed that unforgettable occasion and a deep well of spiritual knowledge opened-up inside of me that I could draw-upon afterwards, with joy. Yet remarkably, I did not begin to write this book for many years afterwards, until one day, when I unexpectedly met a psychic woman, who became very agitated and loudly rebuked me for not starting it earlier. She boldly told me that her spiritual guides had informed her that the world has been waiting for this Holy Knowledge for a very long time.

Be that as it may, writing this book has been a rather enigmatic process, because although I regularly received uplifting spiritual insights and revelations, I often felt like someone, who was recovering from total amnesia and had to systematically piece together all of the little bits of recollections of his distant past, just to know who he was. It was almost as if I needed to tap into a higher knowledge that I had enjoyed in a previous lifetime: “…Every scribe who is instructed to the Kingdom of Heaven is like a man who is a householder, who brings out things new and old out of his treasure.” (Matthew 13:52)

It soon became very clear to me that people do not really know who they are or what they do to themselves and to others, because much of the personal information they have been programmed with and have come to rely-on is untruthful. In fact, that is what makes everything we naturally perceive, appear real when it is all imaginary.

Thus, in realising that we have all been living in a universal fantasy, our perspectives and understanding soon change and we find ourselves in a position, where we can improve ourselves as individuals and also as collectives or groups. This ageless knowledge actually empowers us to call all kinds of new and desirable things to come into our life experiences, just as we can, when we are in lucid dreams.

According to the Holy Scriptures, in the beginning, Adam felt very alone and deeply longed to have a partner like him. God therefore caused him to fall into a deep sleep, took one of his ribs, and fashioned woman from it. Notably, there is no mention in the Holy Bible that he later awoke. In Adam’s Dream, author Joseph Romanella presents a strong and very compelling argument that “Adam,” as the universal man (or mind), is still sound asleep and has progressed to dream of humankind as his direct off spring.

He believes that with this new revolutionary knowledge gained through Divine Grace, the self-centered mentalities of human beings along with their narrow points of view concerning life and the outside world will also have to undergo corresponding changes. In fact, by comprehending that we are currently living inside of a very realistic fantasy as imaginary personal figures, we are immediately placed in the proper perspective to significantly change the way that we think, feel, perceive, will and behave. As a result, with this Holy Knowledge we are in a position to attract many good things into our earthly lives, not only to prosper us spiritually, but also in every other way.

Moreover, with this ‘new light’ a clearer awareness and a deeper acceptance of God’s Intimate Love for each one of us, automatically arises. And, contrary to popular religious beliefs, we also come to the realization that ‘by faith’ all of our sins, past, present and future have already been forgiven and we have been empowered to enter into the Glorious Freedom, Rest, Life, Joy, Wisdom, Righteousness and Eternal Embrace of our Heavenly Father, ‘without’ the need for any good works or sacrifices on our part.

Joseph Romanella was a successful international and merchant banker for over twenty-five years, working in Australia, Canada, and the United States. From childhood on, he has been very inquisitive and has carried an innate love of God in his heart. Approximately twenty years ago, a wellspring of spiritual knowledge sprung up inside of him, enabling him to write Adam’s Dream, his first book. He currently lives in Australia.