A Walk In Connection 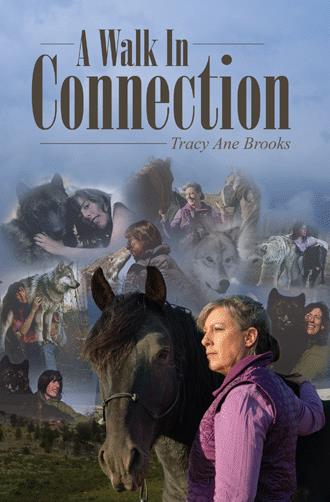 Wolves In My Path

When I was growing up, my father spent many waking hours alone, hidden outside in his garage.  This was a place that he converted into a silversmith, lapidary, rock and gem-cutting workshop.  Inside were wooden jeweler’s benches that lined the walls, each one had a smooth top of Masonite wood framed in simple raw 2 x 4 boards that finished the benches in a basic rustic way.   Among the variety of tools my father had in his shop, it was the big steel anvil that stood out like a sore thumb.  He used the anvil to hammer out bracelets of sterling silver.  The giant hunk of steel was bolted to a large wooden stump it was so heavy I could barely move it.  The anvil sat right next to an intricately designed cast iron antique wood stove.  My father kept the stove burning in the winter and kept the room warm enough to work in the cold mountain atmosphere.

The cement floor seemed damp most of the time the moisture enhanced the smell of motor oil and gas.  Combined with the unique smell of polishing compound that remained in the jewelry buffer it was a very aromatic experience.  My father had a unique way of creating sterling silver jewelry and few unusual pieces like pickle forks and small boxes.   Many of his pieces included gemstones like turquoise and jade that he cut and polished by hand.  I can remember how much his jewelry designs resembled that of a Native American Indian Jeweler.  My father always insisted he was a silversmith as a hobby and was not in it to make money.  He called the technique he used to create jewelry “hand wrought.”  For special occasions both my mother and I would receive different earrings, rings or bracelets.

My father prided himself on the ability to work for weeks on specific pieces and when they were finished, he enjoyed giving the pieces away as gifts.  When I was in my twenties he taught me how to make “hand wrought” jewelry and it was not long before I began to flourish cutting out and sculpting jewelry pieces of my own design.   In 1987 I started my first home business as a silversmith.   I created many different earrings, pendants, pins and more using designs I sketched up of animals, birds, feathers and even wolf tracks.  I named my new jewelry business, “Black Wolf Silver,” inspired by a beautiful photo of a black wolf I’d found in a magazine.

I felt a strange attraction to wolves, not sure where that feeling was coming from, as I had never been around wolves and knew very little about them.  Growing up I lived in the mountains of Colorado with large Alaskan malamute dogs as pets, maybe that is where my affinity came from.  Any connection I may have had to nature during my childhood was something that I often took for granted; ever since I could walk, the mountains and forests came right up to my doorstep.  During my playtime, I would roam freely with my dogs throughout the vast wilderness, oblivious and with no fear or little acknowledgement of the wild animals surrounding my home.

After working for over a year building many jewelry pieces, I gathered my work into a collection and presented it at a small gallery opening on the Pearl Street Mall in Boulder.  I would immediately earn a spot as one of the featured artists and for several months ventured in to selling my work there.  As the months went by with minimal sales, I begin to become discouraged.  I questioned my choices and I longed to do more with my work than just selling at a store in Boulder.   I constantly looked for opportunities that I felt would help to expand my work and be satisfying at the same time.  I often donated pieces to local charities; good causes and entertained thoughts of someday wanting to help animals.

One day, as I sat contemplating the next jewelry design at my workbench, my father walked in the door behind me and dropped the local Daily Camera newspaper down in front of my face.  The paper landed on the desk with a photo of a striking black and silver wolf face up, staring at me.  Curious, I picked up the paper to read the article about a place in Southern Colorado called Mission: Wolf, a captive wolf sanctuary being built by Kent Weber and friends.  It was 1989 and the article announced that Kent would be presenting a black colored gray wolf named “Shaman” at the University of Colorado as part of an educational outreach program-teaching people about the true nature of wolves and their importance in the wild.

It was late March when the day arrived for the wolf program.  The weather had been snowy and cold and I was a little worried about driving my car down an icy, snow packed road.  The program started in the afternoon and thankfully the day turned out sunny and clear, by the time I got into my car to go, the road was dry.   Relieved I eagerly drove my 1972 Chevy Malibu fondly nicknamed “the green bomber” into the town of Boulder.  While driving I realized I had never seen a wolf up close before, except once, the Arctic wolves at the Denver Zoo.  It felt as if I was on a bit of a mystery adventure.  I had no idea what I had hoped to gain that day from my experience meeting  “Shaman.”

Perhaps some kind of artistic perspective that was new and fresh would creep into my conscience.  Besides, bettering my understanding of this legendary creature could do nothing but enhance my mind and arts on all levels.  And as a contribution to the wolf sanctuary I created wolf themed jewelry pieces to give as a donation.  My hope was the jewelry would be sold as a fundraiser for Mission: Wolf and the money used to help with a project such as fence construction.  Before I left the house I tucked a small box packed with earrings, pendants and pins, inside my pants pocket.  I was growing excited to see Shaman the wolf and hopeful for an opportunity to meet Kent in person.

I arrived a half an hour early to the university.  Right away I found a parking place large enough to drive the bomber into.  The lot was located across the street from stone buildings where I thought the program was being held.  I did not know exactly where it was, yet I was determined I would find the right building quickly.  I had been on the campus many times before, but always at a different part of the university.  Anxiety came up in my stomach. Not wanting to be late, I briskly walked to the first building.

I walked inside, paused a moment and realized of course it was the wrong building.  Back out on the street I scanned the adjoining buildings it looked like the building across the street was where I needed to be.  The room was quickly filling up with students as I walked in I looked around for a place to sit.  Only a few desks were left open near the back of the room, up the stairs.  I proceeded to climb the stairs and sat in the first desk I could.  With moments to spare before the start of the program I recognized the anxiety I had been feeling was for nothing.   I never attended college, and my anxiety laced gut association with this specific college came from childhood experiences.

Living with wolves has provided Tracy with countless experiences that have changed her life in unimaginable ways. As a cofounder of Mission: Wolf, a wolf sanctuary in Colorado, Tracy has spent half her life studying wolf behavior and body language. Tracy has learned to leash train and walk wolves, often with painful consequences. Join Tracy as she develops a special bond with an intense British Columbian gray wolf named Shaman. Shaman becomes a great wolf teacher, and eventually the shy wolf grows to trust her. Tracy relies on her instinct and intuition as she moves to calm sensitive wolves like Shaman. She does well but believes in her heart that she can do better.

A horse named Ikus comes into Tracy’s life and dramatically changes her understanding of horse-to-person communication. Driven to find her own way to connect with horses, Ikus becomes a professor in nature’s university as Tracy embarks on a journey of learning to speak horse language. Something profound happens when Ikus, a horse with an attitude and a dislike of being haltered, gives Tracy an unexpected lesson in resolving feral behavior. Not only does Ikus teach Tracy how to stop his run-away glitch but Tracy discovers a missing link in her previous wolf-handling life that will forever change her approach to resolving feral behavioral problems in both species. This experience ultimately provides Tracy with a foundation for clear communication, and it awakens in her an effective and natural way to connect with animals.

Tracy’s world of wolves and horses is forever inspired as she moves to a new level of connection beyond anything she believed possible, and she strives to share what she has learned. Sally, a young woman from the UK, comes to volunteer at the sanctuary and learns to calm a very frightened eighteen-year-old horse who is going blind and in danger of injuring himself.

Tracy has walked wolves into schools, universities, and museums like the Smithsonian Institute. She’s brought them through challenging studio sets like those of The Today Show and Mr. Rogers’ Neighborhood, and she has presented wolves to countless audiences across the US for over twenty years. Tracy has been instrumental in building Mission: Wolf, a captive wolf sanctuary in Colorado. Her main focus is ensuring the wellbeing and contentment of the wolves. Tracy is one of those unique people who possess a deep understanding of instinctual connection to animals. After spending ten challenging years working hands-on with wolves, a horse came into her life. Tracy embarked on a study of horse training, desiring to discover for herself the magic behind horse whispering. What she learned was to listen to the horse and mirror its natural behavior. Tracy wondered if she could use what she learned from horses on wolves. After all, predators and prey all have the same foundation of behavior: flight, fight, or freeze. Tracy learned to mirror a horse named Ikus and resolved his run-away behavior in a simple, natural, non-evasive way. Ikus reminded her that these abilities to work with animals were within her all along. What followed was an intensive study of mimicry or mirroring wolves and horses. Many years of groundwork paid off when Tracy had an opportunity to mirror Illiamna, a feral wolf that she presented to over four hundred people at Colorado University in Boulder after only fourteen hours of moving with him. The icing on the mirroring cake was the opportunity to work with a troubled, wild-caught mustang. A Walk in Connection is based on Tracy’s life of learning to connect with animals. Her personal stories are intended to inspire, empower, and contribute to the greater global understanding of communication with other species.