Mary Magdalene's message of self empowerment. 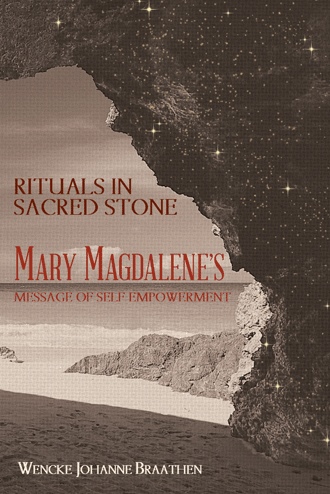 In the deepest of midnight Mariam started her work. The brazier was still casting a golden glow in the tomb, and provided her with a minimum of heat. It was time.

Yeshua had appeared dead since Friday afternoon. It was now almost Sunday morning. The Sabbath was over. She had tended his wounds all throughout the night. Now she could start her work of bringing him back.

She looked at the head of Yochanan. It had been glowing keeping the life force of Yeshua present. It was time to wake up Bashra too. Mariam needed her wisdom for her work.

Bashra was taken out of the herb bag, and her incantations were sung. Mariam lit more candles in the space, and refreshed the brazier. Soon the air was filled with the scents of herbs warmed in oil, incense burning, essential oils from fragrant plants and the sounds she created to establish the right frequencies in the room. Yochanan and Bashra joined in. Soon she had the reverberating overtones she wanted.

She silently intoned her own mantras and changed her consciousness so she took in the space she was in. For Yeshua's sake, she needed to vibrate with the stone surrounding them. She needed to send the life force inside her to find the fine stream of life inside of him. To do that, she needed help from the mountain itself. Matter contains an immense force. She could utilize that force, by putting her intentions through the material, when she had established a strong rapport.

The line of life within him had already found the stone underneath. The stone held him, kept his life in place so it would stay with his body. The stone itself had gravity and would be able to call his spirit back stronger than his body could do alone. Mariam needed to talk to the stone, and she needed Bashra to help her.

There was no need for words between them. Their ancestral connection spoke through their shared cell memory. She knew where to go to find him, but she needed the added strength.

Mariam continued the tonal sounds. She loved Yochanan’s deeper tone and specially the sounds he could resonate in his scull. He was always the best at inner overtones, and that skill had not diminished. Verbal communication with him was also redundant. They communicated through the body of their relative. Yeshua’s essence was already growing in her. The two cousins had the same genetic material. She carried Yochanan’s ancestral knowledge with her as well.

The new balm was ready. A thick salve had been formed as she had stirred together the ingredients. She counted on that the sedatives she had given him yesterday would have worn off by now. She was more concerned with penetrating the strong ointment she had applied on Thursday night to desensitize him. Hopefully that had lost its effect as well. The strong tincture she used this time should penetrate that shield.

When the space felt properly prepared she started applying the oily substance to his head. She had to start by opening the portals of his body where the spirit would reenter. Invoking Sekhmet, and remembering Suri wearing the headgear honoring the lioness, she envisioned her animal companion in Ephesus, the black panther. She realized she needed his steady strength this time. Yeshua had gone very far away.

Entering into his body with her mind through the same portal he had left through, she looked for his sphere of condensed life force inside him. She borrowed a strain of golden light from Yochanan’s reservoir of loving emotions, and went searching more thoroughly. Usually she could find him without much effort, and strengthening what was already there was just a matter of transferring energy.

She could feel that he was still here. He had not left his body for good. But where had he hidden himself? Earlier she had found him near his heart region and not been concerned. Searching in that area this time brought no result.

Mariam called for Bashra. She needed her ancestral strength. She counted on Yochanan to keep the golden energy flowing. Blessed be all the beautiful people who had poured so freely of their love. She could feel that their continued prayers kept feeding the light emanating from the head next to her.

Like twin light beams Mariam and Bashra went inside Yeshua’s body. Mariam’s fingers kept working on the top of his head and down towards his neck. The sensitive section on the top of his skull got most attention. She needed to get in there and awaken the small glands in the middle of his brain. Together they secreted a fine chemical which would start up his brain activity again, and then encourage his heart to find its rhythm.

The light beams found the three points in the brain and gave each of them an impulse. Then they continued further down in his body in search for his sphere of concentrated light. At his neck they spread into two lines coming down his chest, being extra careful around his heart. Everything seemed silent. The tissues had the color of rain clouds.

Mariam was alarmed. Healthy tissues had a pink, reddish tone and glowed according to her patient’s force of life. Gray was usually a sign of lack of life, of death creeping in stealing away the colors.

She didn’t like this appearance at all. Feeling a glimmer of his life force underneath, she knew he was there, somewhere. But the signal was weak, and this gray mass had to be removed before she could continue.

Rain. Rain moves. Rain drips. Rain forms raindrops, they drip down, they follow gravity, the form rivers. Following her own imagery, she could hear the sound of twinkling rivulets of water sloshing down crevices in a mountain side.

Her vision encouraged the gray color to move. She led it to move as a cloud of mist that needed to settle, needed to find lower ground. It followed the gravity of the stone underneath him and sank into the stone itself. Gradually it left his body, like a substance in water settling to the bottom simply because of its weight. She kept encouraging the gray mass to find its way to the water in the mountain. She made it think of itself as water and thereby be willing to behave like liquid.

Mariam could see it now. It was visible on his skin. Not like color returning. More like color leaving. It followed gravity, and concentrated itself in the parts of his body touching the stone. She could see the upper part of him get lighter, whereas the part closer to the stone had a denser, grayer look.

The stone liked this substance, and the grayness liked to be united with the stone. In a sucking motion from under the middle of him, suddenly all the grayness was pulled into the stone in one swooping motion. Then it was gone.

Bashra, what was that? I’ve never seen anything like it, Mariam asked her lifelong companion.

Remember all the people he has healed. However pure he is, there will be some residue of the negativity he clears from them. Even though he was very successful at sending it through him and into the ground, there was a gradual build up in his body he wasn’t aware of.

He healed thousands. The sheer number of people’s essence he allowed through his body would do that, I guess.

And don’t forget, he is in timelessness now. He will continue his work.

You mean; the gray cloud we’re clearing now contains residue from the future?

Timelessness, dear. You sent him there. He will clear people who call for him, regardless of what time frame they exist in.

Were Jesus and Mary Magdalene married? In Rituals in Sacred Stone: Mary Magdalene’s message of self empowerment you’ll find the depth of love, devotion, knowledge and wisdom that made this famous couple able to work as a powerful team in a world mired in occupation and rebellion.

The preserved shrunken head of an ancestor accompanies Mariam while she is educated at the mystery schools of Egypt. As a fully trained priestess, queen and wife, she performs the rituals required to apply the gifts of the Magi. Was the head of John the Baptist an oracle used as a political plot? Why did the crucifixion take place on a hollow hill called “the skull”? What is the Journey of Osiris?

Rituals in Sacred Stone: Mary Magdalene’s message of self empowerment is a controversial interpretation of the life of Mary Magdalene and brings you to the heart-wrenching choices that her education, her ancestry, and ancient prophecies forced her to make.

What has been chosen to be revealed and what has been masterfully hidden makes the biblical figure of Mary Magdalene even more alluring. Veiled in mystery and obscurity, the fascination has amplified as more historical facts have been shaken out of historical dust.

Wencke Johanne Braathen has looked for material about Mary Magdalene for over thirty years. Recent research by respected authors has painted a rich picture of her time and the culture surrounding her. Traveling in southern France, the author walked the paths visiting the castles, cathedrals, and grottoes where Mary Magdalene lived according to the local legends. In Provence, descending the stairs through time to a crypt, she encountered a powerful relic—the head of her heroine. Combining her research and her own personal experience, she wrote Rituals in Sacred Stone: Mary Magdalene’s message of self empowerment.

Wencke Johanne Braathen was born in Norway among stave churches and homespun wool. She lives in Chicago with her husband, who loves her and the fjords she came from. This book is the result of a lifelong journey.