This World of Echoes

A Divine Guide to Being Human 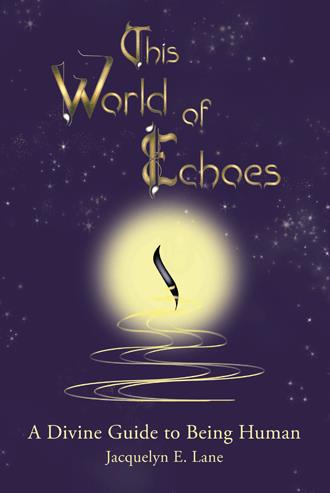 Deep in the depths of cosmic night, Silence holds all the sound there is, a silence more profound than the deepest thoughts of your imagining. As you travel in that silence behind all sight, you will see Him. He is the Stillness, He is the Silence, but His music is constantly playing. He plays for notes the moons and suns, each note a world contained, for nothing but completeness comes from that which is complete. Each note is round, a sphere of life, its tunes already sung.

Reality is the still Silence of pure Light that we call ‘God.’ Sound springs forth from Silence, from the Stillness of the One but you hear it not, yet it will tell you so directly the thought of God. For God is and changes not, but as God ‘thinks’ the substance that is God appears to move and thus it is that what we call the universe appears to be. God is One and cannot be divided but as God ‘thinks’ the apparent motion of His thought seems to divide the undivided and silence becomes sound and stillness, breath. The Light that is still, in darkness, motions out in waves that move out and back again in reach according to the depth of the breath that sent them forth. This wave motion has the appearance we call manifestation, the bringing into greater and greater physicality, God’s thought. At every level of manifestation the Light sings.

The motion of God’s breath creates sound from its Stillness and Light from its darkness for God, being all there is, must contain all sound within His Silence and all motion, which is Light, within His Stillness. Thus the Sound and the Light can only echo that which God is. Thus even the angel chorus is but an echo of its source in the Stillness of God. Like an arrow from a bow, the echoes are sent forth and like the string of the bow they must all return to the Stillness again.

As the Light waves forth it has both colour and sound, the two sides of its wave that propel its motion. The quality of the song depends on the Light’s consciousness of itself. Thus, the more enlightened the consciousness, the more closely will the song echo the purity of its Light source.

From each note the Piper plays a world tumbles forth and each world’s note, a song the angels sing. Just as the One Sound of God contains all there is, so the one note of a world contains all the notes of that world’s song and they are sung forth from the Stillness to return to the Stillness when their tune is sung.

So, the stars of heaven sing, each an echo of the One Sound and just as each thing on each world contains within its sound all that it is, so it is contained within the One Sound of all that is. Thus can each be known by his sound and each sound be heard within the One Sound, but if you would know what the true sound of something is, you must attend to its source and not its echo.

All sound, therefore all motion, consequently all manifestation, is only an echo. You are caught in the illusion of materiality by paying attention constantly to outer limits of the echo. You have been seduced by an echo. Power increases as consciousness gives its attention to the source of the echo, that is, as consciousness returns to itself, its point of stillness, being.

Wake up! Wake up! Can you not see them? They dance in beds of flowers, cavort in puddles, ride the sunbeams, howl the wind. Live in movement are these creatures, born of nature’s energy, disciplined not, but following their natural path. At the same time they both carry the energy and are the energy that brings sparkle to a garden and vibrance to a sea.

The devas create the tunes the nature spirits play. The dancers of the natural world, they identify with the stream of light a deva sends forth, and becoming that stream, move it through the plants and trees.

Each being that creates, produces countless waves of energy, the echo of their thought in the mind of God, each wave itself a being, moving through its world. The same is with your thought, creating ripples through your world. The thoughts assume independence, once released, to play until withdrawn, back into the mind creating them.

So it is with creatures such as these, that when man destroys their habitat by callousness or greed, their life withdraws. For how can it find expression when that in which it resonated—a plant, or forest tree—is gone, or altered such by man to render incompatibility with the grand design of devic intent, and part of God’s expression express no more, withdrawn to its source to leave man alone with his consequences. But devas want to sing and nature spirits love to play and when a human welcomes them and open hearted asks to hear their song, the devas rush with glad delight, spilling child-like spirits out upon the world and human beings delight in healthy gardens, sparkling seas and forest glades to heal the heart and spread the fruits of countless trees.

Do not stand apart and see them just as dancing fairy rings, but try to understand these energies weave webs of light that bind with love of being the fabric of the world. They take your share of laughter with them in the world. Love will heal for it is whole, so call them forth wherever Earth, bereft of Life, needs healing. But first prepare the ground with love and healing of your own. Cleanse it free of negativity and hurt of carelessness. Sweep all that fouled a perfect place and send it into Light that knows no loss or imperfection.

Work in groups of ones who Love and when your work of cleansing’s done, invite the nature spirits there. Consult their devic counterparts and beg their song. Let them decide what growth there’ll be and render up your healing intent for them to use, and in this co-creation of your desire to heal and theirs to sing a world in song, the nature spirits will come forth to bind together that which has been sung and whole will be the garden state of Earth.

The topics of the three books include:

• The Self, the Soul and the Personality

What if the world you inhabit is not itself real but the end result of waveforms echoing from the source of all life—a source that humans label “divine” because it is beyond our full knowing? Yet we sense it and yearn to be more conscious of its presence in our lives.

This World of Echoes offers divine keys to understanding our experience of being humans on planet Earth and our relationships with ourselves, each other, and the greater life.

In beautiful, liquid language This World of Echoes releases our old, limiting ideas and perspectives and opens our inner senses to the boundless mystery of being. It teaches us how to recognise and rise above the ways in which our personality distorts our ultimately divine nature.

The three books that make up this volume can be read sequentially or opened anywhere as the whim or need arises—a rich ground for pondering, meditation, and insight. Even after many readings, the wisdom remains fresh, resonant, and useful, regardless of our status or station in life, our culture or circumstances.

With over forty years study and experience in metaphysics, this well-traveled New Zealand author-artist writes from a global perspective on nature and spirituality, extending the boundaries of our perception, inviting us to rethink our understanding of reality. Jacquelyn enjoys sharing through her workshops and talks on art and metaphysics.