From Richard Kimble to Barack Obama

America as Viewed by an Egyptian-American Who Loves Her 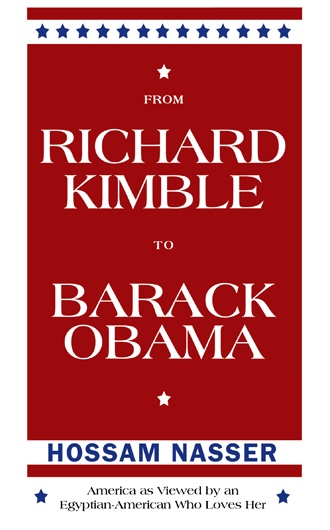 So there I was, a ten year old boy sitting in the living room that Friday night in 1964 anxious to watch a show that captivated the imagination of millions of viewers all over the country for months on end. That country was Egypt and the living room was in Alexandria.

ABC’s The Fugitive mesmerized me, and I was hooked for life on American showbiz. The protagonist, Dr. Richard Kimble, had been wrongly convicted of murdering his wife and sentenced to death. And upon escaping from the derailed train that was delivering him to death row, he vowed to find his wife’s real killer—the infamous one armed man.

What was captivating about the series was the fact that Dr. Kimble—portrayed brilliantly by David Janssen—was determined to fight the entire system in order to prove his innocence. That individualistic approach to life was fascinating for a ten year old boy conservatively brought up in the upper middle class Egyptian family of a well-respected college professor. And even though I completely identified with Richard Kimble and his fight for justice, I still felt the utmost respect for Philip Gerard, the relentless police lieutenant from the fictional town of Stafford, Indiana. Detective Gerard was a man trying to do his job to the best of his abilities. This was yet another trait that added to my fascination of this distant land called “America,” and I quickly developed a sense of admiration for these traits that so distinctly identified those folks across the Atlantic.

The Fugitive aired on a weekly basis, and ran for a number of years, by which time I was completely sold on the American brand. Was that because I was an idealistic kid who wanted to believe that there was a place out there where somebody could fight the system from the outside and yet be exonerated if his case were proven? Or was it because everyone was striving to do their best, which drove the entire system forward and caused it to flourish? Whatever it was, it seemed to be working, even though mistakes were possible and, in fact, inevitable. And although there were no guarantees in life, this whole bonanza of a social experiment seemed to tick along just fine.

In those days, I loved hearing my Dad’s stories about his time studying agricultural sciences at the University of Missouri in the good old USA during the late forties and early fifties. He lived in Kansas City, Missouri, and I loved looking at photos of him all bundled up, standing knee deep in the winter snow. He even kept the set of AAA maps with his driving route to the East Coast marked off in black ink when he headed back home. This exhibition was usually associated with a few personal anecdotes about his life in the US. The story that still sticks in my mind was about how he used to sign his checks at his favorite diner in pencil! And I would gasp upon hearing that and start asking him “what if…,” but he would always assure me that people were honest and life was good. I must admit, however, that this was one practice I never took up into my own life. Nonetheless, it was yet another indicator as to how safe life can be among people who are fundamentally good and genuinely friendly.

During those years, my favorite cousin Dalal was living in Washington D.C. while her husband was assigned on some diplomatic mission at the embassy. During her summer visits, she would usually bring back gifts for us youngsters. These were mostly clothing items of the finest quality, and I showed mine off proudly. I developed a sense that there was something credible about a product that carried the claim, “Made in the USA.”

There was one item in particular that she brought to my father–her uncle–which was especially impressive, and that was a huge luxurious green barbeque grill, the center piece of many a backyard cookout in beautiful Alexandria during the warm summer nights when the Mediterranean breeze filled the atmosphere with its special and unforgettable aroma. After each use of the Cadillac BBQ, Dad would personally clean it to the point that it sparkled as if it were back on display in the showroom. He would not allow anyone less qualified than himself to interfere, nor would he allow his pride and joy to remain at the mercy of the elements. The green beauty always returned to its special place under the stairs where it rested ‘til its next call to duty. This family member held its rightful place in our household for at least fifteen years, retiring only during its last few years after Dad had passed away. Somehow, many of the fun activities died with him. Dad, may you rest in peace. I know you would have had a lot to do with me and my own family if you stayed around longer. Moved by your stories, I have retraced the journey you made to America six decades ago, and I am still here. I just chose a place with a better climate!

In the summer of 1952 the military overthrew King Farouk and replaced the monarchy with a republic. Gamal Abdel Nasser, a youthful and charismatic military man, was its president. In May of 1967, poorly advised by his confidant and right arm, the top military man, Abdel Hakim Amer, about the state of readiness of the military to go into battle, Nasser decided to blockade the straits of Tiran. This narrow passage between the southern tip of the Sinai Peninsula and northwest Saudi Arabia at the southern end of Gulf of Aquaba is Israel’s only outlet to the Red Sea and the Indian Ocean. Israeli ships now had no direct access to eastern Africa or Asia, so this act was tantamount to a declaration of war and was one of the crucial events leading to the six-day-war in June of that year.

The war resulted in a resounding defeat of the Arab forces, and landed the most severe blow to Nasser’s status within Egypt and the Arab World as a whole. More importantly, it broke his spirit, and he was never the same after that. It was later ascertained that Nasser had in fact died in 1967, although he was not buried until 1970.

On a personal note, the war coincided with the final exams of our middle school, the EBS (English Boys School), and these were the national exams required for enrollment in high school. We had already sat for the first three days of the exams, and two more were left when the war broke, so our exams were halted. This hiatus continued for a good three or four weeks before testing was resumed, and as might be expected the disruption adversely affected many students. However, the consequences were most deeply felt at the national level in the humiliation that every Egyptian felt during the following six years.

During my years at the EBS, I had befriended one of the three Jewish brothers who were my schoolmates there. Zaki Shashousha was a mild-mannered, kind-hearted young man who enjoyed a good game of soccer during recess as much as did I. We had nothing but good feelings towards one another, and our friendship transcended our religious or political differences. However, as a consequence of the 1967 War, his family decided that it was in its best interest to immigrate to Israel. I have not heard from him since—I missed him then, and I hope we meet again someday.

In today’s troubled world, it is imperative that we develop an accurate and precise understanding of the other people who share the planet with us. How they think, why they act the way they do, and why we think they hate America, or do they?

“From Richard Kimble to Barack Obama” is a mixture of personal experiences intertwined with political events that span over five decades. You will read a totally fresh perspective about political events along with a different assessment of those major players who helped shape them.

You will realize how “conventional wisdom” may be a synonym to mental complacency.

As someone who had one foot planted in the land of the Pharaohs and the other deeply rooted into the land of opportunity, I am going to tell you my side of the story.

I will share with you the perspective of a man born and raised in the Middle East, but chose America for his home, and will let you in on what goes on in the minds and hearts of people in this vital and turbulent part of the world.

This book is written for every American who cares enough about this great nation to make a serious effort at learning about the other side of the story, and in doing so may discover an uncharted path to world peace.

The author is a licensed professional engineer in California, holds a Ph.D. in structural engineering and runs his private practice as well as teaches part time at Saint Mary’s College. He lives with his wife while being visited by his four adult children who live all over California. He has published a collection of short stories in Arabic titled “The Price.”