When Spirits Speak: A Gathering of Heroes

Stories of U.S. Soldiers in Vietnam 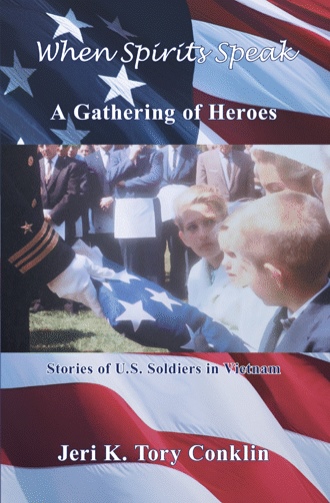 As my conversations with the spirit children came to a close early in 2011, I asked them to gather together one more time for a Question and Answer session to end the book. Suddenly, a hush fell over them, and a pathway opened in their midst. A combat-weary, bloodied soldier moved forward, supported by one child after the other, until he stood before me. I knew instinctively that he was appearing in this guise to make clear to me the way he had passed.

Writer, you aren’t finished yet. Will you write our story?” he asked, his voice pleading. Kneeling down on one knee, he unshouldered his M-16 rifle and leaned on it for support. He said to me:

This is your next book, Writer. The children saw me coming and stepped aside. Not in fear, though I am pretty ragged looking after all those months in the jungle. No, they knew. They knew I had to come through now to prepare you for what lies ahead.

So much blood has been shed; so many boys and men have lost their lives. Writer, please listen as we tell our stories of our last hours on the earth plane. None of us were alone when we passed; the White Soldier was with each of us to bring us home. We are at peace now. We want our families to understand and be at peace as well. Are you ready, Writer? My men are right here, so eager for you to do this for us.

So I began writing down the stories told to me by the soldiers who passed through the sea of children that day. All of the soldiers who spoke with me had fought and passed in Vietnam between 1965 and 1975.

The stories in this book are from soldiers who once served in Vietnam and who have contacted me via the world of spirit. Their stories are filled with the dreams of young men who grew into adults all too quickly in a land not their own. They speak of the bond between soldiers; the brotherhood that stands the test of time and distance; the fear they lived with each day; how they wrote letters that would be sent to their families if they were killed; and the simple things they came to take for granted. Some speak of their love of Vietnam and its people. And many of them convey their last few hours on the earthly plane.

“Jeri Tory Conklin—a gifted intuitive, archaeologist, and investigative author—again lifts the veil between the visible and invisible world, this time to give us an inside perspective on veteran experiences during the Vietnam War. An eye-opening, inspirational book.”
—Patricia Johnston, professor of anthropology; owner, grief coach at Purple Lotus Coaching http://purplelotuscoaching.com/

“Seeking answers to “Why, is there no peace?” comes to us all when we send a loved one or venture into the path of war. Living without closure bids us to seek out those with “The Gift” of sight into the world of spirit. I have found closure within these pages. Your eyes will be opened, if you have lost a loved one to death on a battlefield. ”
—Pamelia Cannataro, military dependent and Vietnam veteran’s widow

Jeri K. (Tory) Conklin is a native Californian and new-age author. She holds a master’s degree in archaeology and anthropology, is a traditional Reiki master, and practices alternative healing techniques.

As a child, she began writing stories to entertain herself; now she channels and writes for those that contact her from the world of spirit. She is affectionately referred to as “Writer” by those with whom she communicates.

She lives with her husband and conglomeration of furry friends in Northern California.