"The Whale People" A Personal Journey of Discovery, Transformation, and Healing 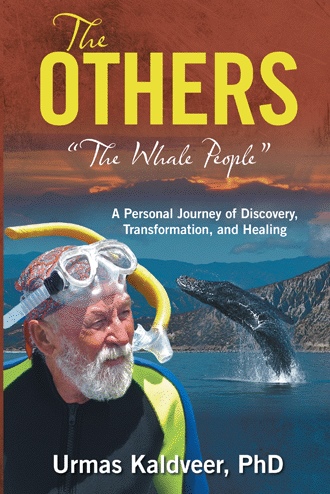 One rather slow day at the lab I received a phone call from one of the professors at Berkeley needing some specimens of a particular fish available in the outer Bodega Bay area. I had begun noting where the best places were to acquire popular research specimens so I was confidant that I could fill the order. I said I would get them to him within the next few days. It was still early in the morning so I went around the lab to find someone to go out with me to help with the lines. As it turned out no one was available. I really did not want to go out alone but I had promised the professor so I got my gear together and took “Sulu Girl”, our 35 ft cruiser, out through the channel and into the open ocean. I noticed that there was a thick fog bank a ways out but it was hard to tell how close and how fast it was moving, but I figured I had plenty of time. Once I got my lines out I rechecked the fog bank and yes, it had come in rapidly and from not far away. I hauled in my lines because I did not want to be caught in a fog so close to the cliffs with a significant swell running (The North Coast of California is historically notorious for sunken boats and ships that have gone up on the rocks of that craggily coast). I did not have radar or sonar so I had to do my navigation by depth finder and chart. Not being particularly efficient at this sort of thing, I realized that there was indeed a real good chance I would end up on the rocks. If this was the case I was very definitely in serious danger, perhaps more than I had ever been in my 30 years of life so far.

The fog was miserably thick, I could barely see the bow of the boat and I felt as alone as I could possibly imagine. My knees were actually weak! Suddenly I heard a loud eruption of water in front of me and a huge black mass exploded from The Sea, arched in front of the boat and came down with a thunderous splash, rocking Sulu Girl and just about stopping my heart. I knew it was a whale (the first one I had ever seen) but I had absolutely no idea what else to think except, “damn, that was close” and “I hope it’s friendly”.

I couldn’t see it but it started to circle my boat, blowing loudly and not causing a ripple, but I knew it was close, real close. This went on for an indeterminate time during which my attention was drawn away from the possible disaster, and I begin to “feel” the energy of this whale, AND it gave me strength and hope….I am not alone.

When the fog cleared, I found myself directly in front of The jetty leading into the harbor, a safe place compared to where I had set and hauled my lines. The whale left at the moment the fog lifted and I didn’t see it’s blow again. I contemplated the significance of this “event” for quite some time until I came to the conclusion (reinforced now by dozens of similar but not as dramatic moments) that this whale “knew” I was an intelligent creature like itself and decided to help me because it also “knew” I was in a dangerous situation. I have had a number of people hear this story and they suggest alternative explanations. It does not matter, I “know” that that whale could feel my desperation and decided to help a fellow intelligent creature. Did this experience compel me to start on my journey with the Whales, oddly enough, no. I did not see another whale for 20 years and than it was they that called me back to the sea.

Follow the very personal and intimate journey of Dr. Urmas Kaldveer as he is drawn by forces outside himself to engage with the great whales. From straight research scientist, Dr. Kaldveer begins to relate to, and with, the whales, to find that a change has taken place in himself. What started as analytical science became a healing journey. Enjoy his stories of "close encounters" and the revelations they engendered.

Urmas Kaldveer has been a professor and research biologist for the past thirty-nine years. During the most recent eight years, he has been a "collaborator" with Dr. Jorge Urban Ramirez, studying humpback and blue whales in Baja California Sur, Mexico.

What began as his intention to conduct straight scientific research became an intimate personal journey of discovery, transformation, and healing.

He lives alone in a small village on the East Cape of Baja California Sur in Mexico. He retired from teaching in 2009 and now spends his time writing, reading, kayaking, and diving. He has two grown children.