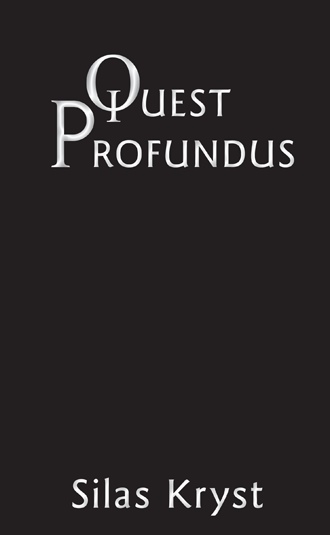 Quest Profundus - the long search, of all encompassing great depth - is a literary stimulus to the individual search of its readers, for answers to questions about ‘Life the Universe and Everything.’
It’s also a guide to self discovery, a starting point for your own Quest dedicated to understanding the reason why and how this universe exists, the reason for corporeal [embodied], material existence - what humans and other conscious, material life forms are, what they are capable of, and what is to become of them.
The other aims of this book are: to introduce non-duality or Oneness; to debunk religious faith and identify it as a scourge - in an attempt to free this book’s readers from domination theology; to set its readers on the road to discovering for themselves ‘The Meaning of Life the Universe and Everything,’ based upon their own good sense and reasoning, whilst remaining faithfully within the scope of their personal threshold of acceptance - this is of paramount importance.
*
Believe nothing, no matter where you read it, or who said it, no matter if I have said it, unless it agrees with your reason and your own common sense.
Buddha, (on values)
*
The Quest is a life-long philosophical practice of enquiry and learning to enhance your human potential, and your understanding of oneness - non-duality, and to extend your awareness of the Universal Mind - The (Hermetic) All. It is also the pursuit of greater understanding of the material sciences, ‘ALL’ that is relative to quantum reality; it is a wonderful adventure that everyone can, and should embark upon.
Simple, basic guidelines are explained, and thereafter some of the most commonly discussed mysteries are given answers and explanations that are identified clearly as the honest speculations of the author and others - in an attempt to lead the readers of this book by example to self-quest for their own path to enlightenment.
Quest Profundus has been written to motivate, stimulate, embolden, and reassure the reader, it has the potential to change the lives of those who read it because it’s capable of initiating the practice of thinking for oneself, and a new and positive outlook regarding learning, reality, morality, and life’s potential.
It can be read and understood by the great majority of people in a relatively short space of time, because it is sensibly straightforward.
There is no code, mystery or secret to unravel, and every effort has been made to reduce the amount of specialised jargon for the reader to contend with; and there are a number of internet source references to assist the reader.
This book is aimed at ordinary, reasonably inteligent, non-specialist, down to earth people.
This is a book that reveals ‘The Quest’ as a refreshingly uncomplicated path to real freedom, strength and enlightenment; a path that can free people from so much of what they usually, but unnecessarily fear. This in turn should result in them enjoying life so much more than they ever have before, and understanding the reason for living as perhaps they never did before.
Its readers can become profoundly liberated, more self-assured, and more independent, capable of identifying and enjoying the real wealth of fulfilled contentment, and perhaps becoming potentially more able to manifest adequate prosperity or abundance into their life (‘their’ reality). This should result in them wanting for nothing that is essential in their lives, as well as possessing new and valid ideals and genuine moral values. They will no longer fear death, or life for that matter, they will never again fear any devil or indeed any god, and they will never more feel inferior or superior to any other being, nor ever feel truly lonely again.
Imagine what it feels like to be aware of universal identity, to know your importance and place in this universe, and to realise the true extent of your power to influence the whole universe.
You are going to love discovering who and what you really are, and what you are actually capable of, especially when it comes to manifesting a better reality.
Be warned though, after reading this book you will probably not have the same outlook on ‘the meaning of life, the universe and everything’ as you do now; instead you’ll achieve a wider vision and deeper understanding of the reality of life, and you will have taken another step towards becoming a more independent, more civilised presence. And hopefully, thus becoming perhaps a little less human than you are now, and a little more universal; you will I hope, have achieved far greater awareness.
This is an essential book for the living who want to live well in a contented sense, and to understand their contribution to continued infinite intelligent existence.
If you fear the mystery of death, then what is contained in this book should help you to dispel that fear. If you have suffered the death of a loved one, or if there is ongoing suffering affecting you or a loved one; here is a possible source of understanding, and perhaps some acceptance and comfort.
If you feel small, unimportant and impotent in the great scheme of things; then the thought provoking concepts mooted here should indicate just how important you really are, and how you’re capable of influencing the whole of reality - the whole Universe, even to the point of consciously manifesting a specific reality in line with your own needs, desires and plans.

This book has been written to empower you, and to set you free.

This is not a dry academic, or a pious religious work, and it certainly does not demand faith or promote ‘a faith;’ it is best described as only ...a simple instrument to stimulate your own quest in pursuit of the truth concerning life and your reality. It is also one of many heralds to the advent of the 2012 enlightenment, when we will “dare to know.”

Quest Profundus is simply a guide to becoming a Questor and claims no more than that.

I, the author of this book, describe or label myself as simply a Questing Unicon Evolutionist; and my main purpose for writing this book is only to pass on that which I feel might free the minds of others from their personal fears, stimulate them to find those answers that sit well with their personal threshold of acceptance, and to equip them to manifest a better life, filled with real wealth, peace and security.
Throughout this book, I will attempt to reveal some of the reality (life) enhancing and enriching information that I believe is significant, regarding those things that I deem certainly have had, and continue to have, a significant influence on mankind’s psyche and history; and some things that probably have greater validity than we are encouraged to believe.
I try to identify and explain forces considered as either mythical, mystical, exotic or even impossible by most people - in straightforward, up to date terms, including a basic introduction to the real science behind magic and manifestation (Quantum Physics). The very probable reality of wonderful things we are all entitled to access and use, that the religious, political and financial ‘Establishment’ [the 1%] - currently dominated and manipulated by the financial elite - would prefer we dismissed and forgot about - The Grand Establishment Conspiracy.
There are instances throughout the book of my own clearly deprecating opinions regarding religion and faith, and those who have set themselves up as agents of these organisations, and there are also controversial hypotheses regarding the origins of the ultimate presence that lays behind the universe - an alternative to the supreme and personified creationist god-being invented and worshipped by Jews, Christians, Islamists and others.

Quest Profundus is a literary stimulus to accelerate the 2012 enlightenment and revolution process now in progress. It is an explanation of the Universal Mind—the Superconsciousness—the Hermetic All. This is a book to illuminate the true reason for life, the universe, and everything. It is destined to be nemesis of the elite 1 percent, and it will also unmask the myths of God, the devil, and death. Quest Profundus is the herald of true freedom and real wealth that is now imminent—that which is the birthright of all sentient beings. Learn to Quest, to think for yourselves, and you will control your own reality.