A Guide for Divine Connection 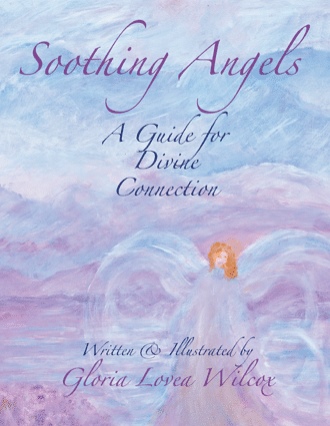 Angels saved my life when I was 33 years old. I was a passenger in a four-car freeway collision en route to a conference on God. My brother was driving our car. We came upon freeway construction. Suddenly an oncoming car jumped the median border and was propelled into our car. My last words before the crash were “we’re going to die”. I prayed a short prayer for protection in the instant I saw the car racing toward us.

My head went four inches deep into the metal dashboard. Our car was totaled and the oncoming car hit two other cars.

The Angels must have softened the blow and performed a miracle preventing my neck from being broken. I had a serious cervical injury, a concussion, and many bone injuries. I was dizzy for six months. I could not pick up my baby or my two year old. The physical pain coupled with the agonizing emotions felt like the worst event on my life. In this near death experience, I felt close to the Divine. I lost my fear of death, and felt very vulnerable. Most importantly, I learned brain injuries do stimulate anger. I went on a big, emotional marathon to release the anger in order to come back to my normal calm.

At night in dreams, the Angels helped me by teaching me principles of appropriate expression of anger. They encouraged me not to dump anger on anyone but to release the original source of anger by tracing it back to where it originated in my childhood. I had an enormous catharsis. They also connected with my mind and telepathically sent me insights that came through as inner guidance.

Because of the accident, I was dizzy all the time. I felt wrought with raw agony because of the dizziness. My frustrations were amplified and I felt out of control. My husband was a very wise man. He knew I needed to release the anger and frustration. Every night after he came home from work he would make dinner, clean up the house, and put the children to bed. Then we had a catharsis session.

The more I expressed the anger, the stronger I felt. He encouraged me to vent my frustrations so I wouldn’t carry them over to the next day. As a result of this marathon, I transformed vulnerability into strength. I learned first hand about feelings, emotions, and the effect of blocked emotions on energy. The Angels taught me how the powerful subconscious mind affects our feeling nature and acts as a clearing house for transformational change. They taught me by being with me all the time. Since I hurt so badly, physically and mentally, having them with me helped me survive. I felt I was sustained and supported by them.

This relaxed me and I began a process of great change and started a lifetime of growing into my spiritual self. I learned Angels respond to our needs when we are light and not angry. I was highly motivated to release my anger. Within six months my dizziness abruptly ceased. Healing my inner child became my path of discovery.

In the long term perspective, I have concluded the accident was the best thing that has happened to me because of the many positive events that have happened as a result of this experience. At the time of the crash, I had no idea what wonderful events were to come from this Spiritual Awakening. There was an unexpected surprise. My HEART OPENED thanks to the Angels. I felt such gratitude for being alive. I had a new perspective on life, was inspired by the Angels to connect to the Divine in every way I could.

My intuitive gift awakened because of my openness to spirit. I began to get fluid expression and awareness to understand client’s gifts and potentials. Wisdom began to pour forth from my mind. Both of my parents had high intuition. I was also born with the gift but the big hit on my head intensified my gift. After the crash I had greater wisdom and incredible visionary ability. I had to learn to modulate this gift so my actions would be appropriate.

Angels helped me in my recovery. I felt very vulnerable and open. I had to reconstruct my way of being. Previously I had covered up my feelings with my intellect. I had to get acquainted with my feelings and attempt to discover my true self. My feelings were also over-stimulated, so I had to release many emotional triggers.

I was born into a dysfunctional family and this experience gave me an opportunity to learn first hand about every feeling that exists. The entire spectrum of human emotions were shown to me as a child. The range of feelings went from love to anger, fear, grief, sadness, depression, and more. Even as a child, my inner self knew that the negative expressions were not right. They were abrasive to me, so I knew I had to learn a better way. I was an idealistic child born with a gift for probing with the same tenacity my father had.

As a child I was a peacemaker. This quality inspired me to release the impact of the negative emotions. At birth I came equipped to learn to use spiritual resources to help myself. Early in life, I was receptive to use our Angels for spiritual help.

After the accident, I felt the presence of Angels more deeply than before. They guided my life moment by moment telepathically. They brought me more peace than ever before. I felt increased courage to face my fears and let go of old habits. In my nightly dreams I received teachings from them on forgiveness, love, and other spiritual concepts. This was my most gratifying experience.

My life took a big turn after the crash. In my inner ear I heard insights of matters of the future. This gave me the opportunity to explore the world of unseen forces. In my work I was able to get answers to questions that concerned my clients deeply. These answers came in telepathic thoughts when I asked a question in my mind. The answers were gentle and not intrusive. I learned that my gift was called clairaudience – clear hearing. All this gift required of me was to have calm peace of mind and a kind, accepting attitude.

I went on a tenacious self-search which gave me connection to my soul. This has given me inspired perspective – a direction in my life. My repressed feelings were awakened and flowed easily. With release of negative feelings I became more natural and open hearted. Unconditional spontaneous love fired up my spirit and helped me regain vibrancy and enthusiasm for life.

Since I was very young, Angels have been giving me guidance in many significant ways. When I was 20 years old and at the University of Redlands, I went on a walk and I asked my Guardian Angel, “Where is the man I’m to marry?” I heard my inner voice say, “Ann Arbor,

It felt right. I made arrangements to attend the University of Michigan the next semester. As soon as I arrived in Michigan, I went to a Methodist Wesley Foundation Party. A man asked me if I would like to go to a glee club concert and double date with his roommate, Bob Wilcox, a redhead who looked like Van Johnson, a movie star. We connected and dated. His mother was getting a Ph.D. at the University of Michigan at that time and when she came for a meeting, he wanted me to meet her. I was shocked when I met her because she looked like me more than anyone I knew. I thought “no wonder he had been chasing me.”

Gloria Wilcox has pioneered the integration of psychology and spirit in the San Francisco Bay Area since 1975. Following her near-death experience, she had a dramatic life-changing awakening where her spiritual gifts blossomed. Gloria has been Director of Inner Growth Seminars, an intuitive counselor, and a Healer with an Open Heart. She invented the Seven Step Emotional Release Process to help her clients feel positive about life.