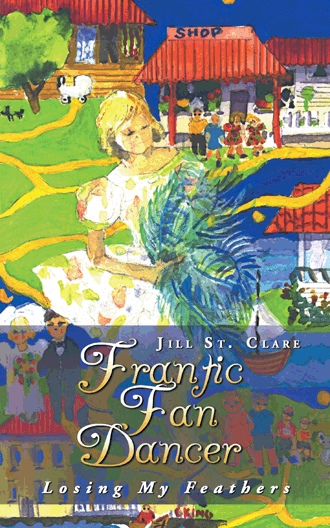 FRANTIC FAN DANCER Milko “Little drops of water Added to some milk Makes a milkman’s daughter Walk about in silk” Written in my Autograph Book 1953 Toronto Public School. Toronto was a dream existence, especially after our life in Hamilton … there were cicadas and birds singing in the bush lands near our home, wildflower strewn pathways along bush trails where Carole and I explored, gum trees in most backyards and lake breezes from along the shores of western Lake Macquarie. Dirt roads wound their ways pleasantly up and down slight hillocks to other lakeside hamlets and waterfront reserves. I dawdled to school across sporting fields indispersed with more stands of streaky tall gums, until I reached the railway crossing where I’d see and smell the beautiful blue waters of the lake. Sometimes it was as still as a millpond, but on most days the prevailing winds brought white horses in from the eastern shores, and they either galloped or rippled up onto the water’s edge around Toronto and its backwater environs. I entered the school grounds from the bottom gate and picked up my pace as I neared the wide classroom verandahs where everyone quickly tossed their ports onto the seats near the classroom windows and headed for the wash sheds down in the shade. It was in the wooden-slatted wash sheds where the school milk supplies were stacked in crates, and, as yet, in the shade the milk was almost palatable. It was guzzled down as quickly as possible with most kids using the back of their hands to swipe away the dribbles of milk trailing down their chins ~ ritual. The bottles were filled with tap water next, and we raced away to find ourselves a tell-tale hole beneath the gums, close to the gnarly, protruding roots of those ancient trees. There, the concentration was almost electrifying as all the kids crouched low onto the dirt, their knees spread wide – all knickers showing, it didn’t matter, and they stared fixedly down into the hole that was persistently being flooded with water from the milk bottle. More water, more water, everyone pouring, until some kind of morphed insect would barely struggle through the deluge of water that had flooded his place, and surface to escape a fatal drenching. ‘Gotcha!’ and the poor little thing was eagerly snatched up and dropped down into the stubby milk bottle. It was a carefree, happy school experience. School days now held no anxiety for me although it was my third new school ~ was I savvy already at being a new kid? I was comfortable and confident as I discovered that I loved to learn. I was feeling the thrill of competition in a disciplined and well- organized classroom sit-stillery. How wonderful it was. I often thought that if I was a teacher I’d have a classroom just like this! Mr. Hemmings was an extraordinary teacher ~ he looked like Mole in “The Wind in the Willows”, and he spurred us on to excel and be proud of every task we performed. I strove to impress him and at home I chattered incessantly about being a teacher – Dad was chuffed and began dreaming a dream… It was such a contrast to the inner- city school in Hamilton from whence we had transferred. The building there had been a lofty dark block of bricks and mortar, an institution that was all, and it leaned unsympathetically over a scorching hot surface of asphalt and cement: this appalling scrap was somehow called a ‘playground’ for so many children who themselves had no backyard in which to play. In the two years of my enrolment there, I’d survived a polio epidemic but lost a classmate, while other children seemed to just disappear ~ there were horrible stories about a monster machine called ‘an iron lung’ where sick children were entombed forever, we thought. I’d witnessed a curious procession of bedraggled migrant children who couldn’t or wouldn’t talk – and if they did, everyone laughed. And I’d survived the clutches of the Infant’s Headmistress.

Frantic Fan Dancer tells the story of an eclectic mix of events that have passionately dealt author Jill St. Clare many hard turns.

Being quietly ruthless to her wounded spirit, she fleshed out those events and cradled them kindly amongst whimsical tales and exotic travels.

This is not a struggle memoir but rather an outpouring of St. Clare’s very best, dealing piquantly with family issues and sparing any pretense. It is the unfurling of richly textured experiences for too long held captive in her mind.

Most delightfully of all, in discovering her author’s voice, she has allowed herself to indulge in her Father’s everyday vernacular.

“One of my favourite sections of beautiful writing is the first of the Cicada stories, which conveys the childhood heart of things so powerfully.”

—Patti Miller, author of The Mind of a Thief and Whatever the Gods Do

Jill St. Clare was born Jill Roberts in Newcastle, New South Wales. While studying for a BEd degree in 1989, she was encouraged to consider a career pathway change from that of teaching to writing. It was not until 2007, when Jill participated in a Life Writing Sojourn in Paris with author Patti Miller, that her stories of Frantic Fan Dancer jettisoned into reality.