Digging to the Roots 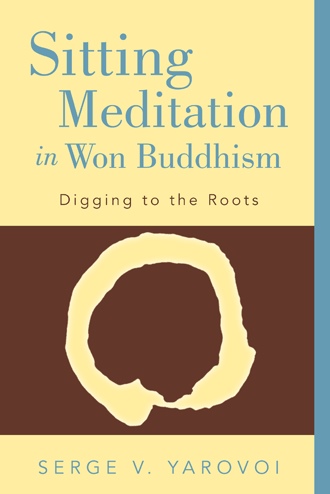 CHAPTER 4 THE METHOD OF SITTING IN MEDITATION Before we discuss the methods, we would like to remind the reader that after his enlightenment, “Sot’aesan surveyed the Four Classics and the Hsiao-ching (Filial Piety) of Confucianism; the Chin-kang ching (Diamond Sutra), the Sonyo (Essentials of Zen), the Pulgyo taejon (Compendium of Buddhism), and the P’alsangjon (Eight Aspects of the Buddha’s Life) of Buddhism; the Yin-fu ching (Secret Planning) and Yu-shu ching (Jade Hinge) of Taoism; the Tonggyong taejon (Compendium of Eastern Learning) and the Kasa (Hymns) of Ch’ondogyo; and the Old and New Testaments of Christianity” (Scripture of Sot’aesan, Taejonggyong, in Chung, 2003, p. 167). Thus, some of the sources for and comments on the meditation instructions are obvious. Others are less so, especially when their elements are present in various traditions, and sometimes, it may not even be possible to determine exactly from which source Won Buddhism inherited a given method. Now, we take a closer look into the methods, point by point, supplying each of them with some comments. To mark the points under consideration throughout the text, we will place them in square brackets as below: [1. Sit on a mat comfortably; hold your head and back straight in an upright, seated posture…] The source of this part of Won Buddhism instruction may be traced to shamanistic and Yoga practices lost in time in the ages before Buddha. This part is shared by various traditions of meditation. However, we would not be mistaken too much if we assume that Sot’aesan, in his instruction for meditation, in many aspects was paying tribute directly to Zazen of Japanese Zen master Dogen Kigen (1200-1253). In turn, Dōgen’s instruction sources can be traced back to Mohe Zhiguan, by Chih-I. Dōgen’s Zazen instruction was definitely known to Sot’aesan, and it says (Dumoulin, 1990, p. 75), “To sit properly, first lay down a thick pillow and on the top of this a second (round) one.” The use of a sitting mat, as the Venerable Chwasan (Yi, Kwang Jung, born 1936) the Fourth Head Dharma Master of Won Buddhism, explains in his comments on the Instruction for Meditation in Won Buddhism (2006, pp. 15-16): …is necessary to prevent pain during sitting meditation. […] The merit of sitting meditation does not result instantly but requires considerable time as it disciplines and tames our spirit. When one sits for a long time, the buttocks are overstrained, which can easily lead to physical pain. To avoid the pain, thus, we need a mat, though the sitting mat is not necessary or directly related to Zen. Since the Fourth Head Dharma Master’s comments are important for understanding the official view on meditation in Won Buddhism, we will henceforth use his opinion often. In Bongkil Chung’s translation of the Instruction, the cross-legged position is discussed in detail only in a footnote, whereas the translation by Pal Khn Chon (1988, p. 47) directly reads as follows: “Sit on a cushion in a relaxed posture with the legs folded. Keep the head erect and the back straight.” Let us see now what Dogen’s instruction reads on the subject (Dumoulin, 1990, p.75): “One may sit either in the full or half cross-legged position. In the full position one places the right foot on the left thigh and the left foot on the right thigh. In the half position, only the left foot is placed upon the right thigh.” Now compare that with the Ven. Chwasan comments on the issue in Won Buddhism (Chwasan, 2006, pp. 16-17): This is the method of sitting with the legs crossed: the seated posture with one leg placed on the other. […] The cross-legged posture enables one to endure for the longest time with head and back erect. The center of gravity is uniformly distributed onto the buttocks and the legs so that one can sit very comfortably for a long time. For beginners, seating in the cross-legged position may not be easy; it can cause pain because the joints have already been stiffened. But when one is accustomed to it, it becomes the most comfortable posture.” As one can see, whereas in Dogen’s version of the instruction the position of the legs is prescribed and fixed, it is not so in Won Buddhism. Pay attention to the following thoughtful commentary by Chwasan (Ibid., p. 17): if one practices sitting meditation for too long in the half lotus posture without alternating the leg positions, though one may feel very comfortable at first, eventually the pelvis can be twisted, as well as the spinal cord, creating back pain or illness. Thus from the beginning one should alternate one’s legs.

The practitioners of any meditation system, including those of Buddhist meditation, have a variety of contemplative practices to choose from. From those unlimited techniques and methods, informed and thoughtful practitioners can find their own approaches, depending on their level of understanding and eagerness, personal inclinations and preferences, and lifestyle and life goals.

Dr. Serge V. Yarovoi is a scientist, poet, translator, and meditation teacher. He holds an MS degree in Biochemistry, a PhD in Chemistry, and a Master’s degree in Applied Meditation Studies. He works at the Perelman School of Medicine at the University of Pennsylvania in Philadelphia, Pennsylvania. He has authored multiple publications in the biomedical sciences and is also known for his poetry publications in a variety of internationally renowned journals and periodicals.