Your Quest for Wholeness and Afterward 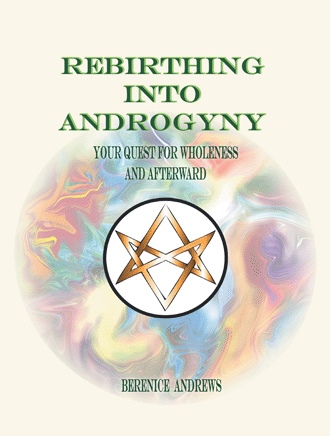 Rebirthing Into Androgyny is all about the creative and transformative power inherent in people. Set in a shamanic stone circle “classroom” and filled with references not only to ancient metaphysics and mythologies but also to modern psychology and quantum physics, this is a carefully crafted textbook for soul searchers. Step-by-step they are guided into an awareness of and connection with the generative power of their human energy system and into the realization of who they are as energy beings, the microcosmic expression of the macrocosmic Creative Energy. In the process, these learners heal their woundedness, balance and harmonize their masculine and feminine forces and emerge into the wholeness of their spiritual humanness.

In these “interesting times,” when many people are searching for spiritual nourishment, this book is intended to be a means of providing it. Rebirthing Into Androgyny: Your Quest For Wholeness, And Afterward offers to the hungry ones a familiar yet totally different feast. While it sets forth an already-established metaphysics, it also presents a radical new idea—one that has been implicit in that spiritual thought but unavailable until now and the new awareness associated with quantum physics.

In other words, while this book provides soul searchers—also known as learners—with an ages-old means of generating a fundamental inner change (a rebirthing), it also provides a new, living prototype of what is being reborn. Thus, a person’s rebirthing is both a gestation and a labor (a quest) producing an ever-increasing knowing (“gnosis”), which gradually becomes being that can finally merge with the Beloved/Self. And the new, living prototype is that of the human soul, not as what a person has but as what a person is: a creative energy being who generates its own “bodies” out of its soul substance—its creative consciousness energy—by means of its archetypal human energy system, while always being guided by its nucleus of divinity.

In this book, which is a textbook for soul searchers, all of this transformative change is offered, explored and explained in a series of carefully-crafted lessons lovingly taught by a shamanic teacher/healer in a stone circle “classroom,” the ancient site of a modern teaching.

There is a grand feast awaiting!

The cover design was created by Paula Kozak, Sarasota, Florida: set in a circle representing the Unity of the Cosmos, the Oneness that includes all people, the hexagram is an ancient symbol of androgyny. The Nordic rune “Dagaz” across its center signifies breakthrough and transformation. The gold of the hexagram against the white background indicates the ever-present divine energies that guide and sustain, while the light spectrum surrounding the circle and extending in all directions indicates the auric “field” of a human energy being, inseparable from its Creator.