The Tale of Eating Beauty How She Broke the Food Spell and How You Can Too! 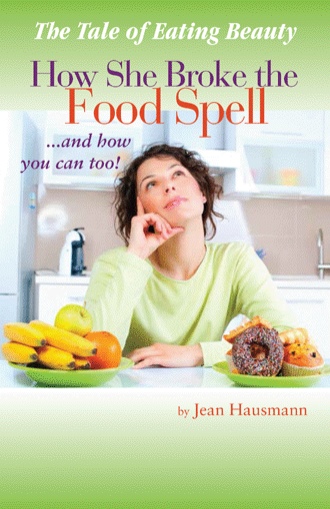 She is full; stuffed, actually. Full of burgers and brats, potato salad, chips and three cupcakes. Right now she feels really disgusted with herself. I don’t even walk anymore, I waddle, she thinks.

She is trying to shed a few pounds – more like the 40 to 45 pounds that her doctor said she needed to lose. She agrees with him and she knows what to do, but despite her best efforts, she has lost and regained those same pounds more times than she cares to remember.

It’s the Fourth of July, and Madge has just finished a picnic with her family at a park close to her home. They were all there: Madge’s husband, Stan, her two adult children, Callie and Peter, and her one grandson, Darryl. Her sole sibling, Carol, and her family were there as well. That made ten in all, counting her two nephews and one niece. It was a great family get-together with lots of lively conversation and games with the kids.

Yet in spite of all of this, Madge is not happy.

Recently, this has been her pattern. She begins a well thought-out food plan, follows it anywhere from a day to a week or two, and then — boom! One cookie, a piece of chocolate, or a second helping of fried chicken sends her back into the spiral of too much food, especially unhealthy foods. It isn’t that she wants to be thin, or to have a perfect body; but she does want her body to be healthy, energetic and nourished in all the right ways.

She looks at all the dirty dishes, the paper plates sitting on the park tables with the remains of dinner on them and decides that she’s going to let her family clean it up; she’s going for a walk.

In spite of the fact that it’s July, it’s not too hot out for a nice stroll. Madge is wearing some cotton capris and a quarter-length T- shirt and has on her comfortable sandals. She is already thinking about the hot summer and how much she dreads being outside. With her body as plump as it is, she is not about to wear shorts or a short-sleeved T- shirt. She feels fat and dowdy, and partly because she has been feeling down, she has let herself go.

She wanders along a tree-lined path for about twenty-five minutes, then stops to sit on a bench and just “think.” But her thoughts are hardly new. They start down the same old road: Why do you make this so hard? What is wrong with you? Why are you such a weak-willed woman? Why can’t you just eat less and stay away from all the high calorie carbs? How many times do you have to feel this way?

Madge can barely stand hearing the same tape loop running in her head, but she doesn’t know how to turn it off. She can’t stand being fat anymore. She hates how she looks. She hates being winded when walking up stairs, or when her grandson grabs her chin and says that she has a “gobbler neck.” Her doctor has told her that she is a serious candidate for adult onset diabetes. She takes blood pressure medication, has poor cholesterol numbers and her knees bother her. So losing weight is about more than just looking good. It’s about staying alive and healthy. She even wonders if she is not being taken seriously because she is fat. Would she have to have a heart attack or something equally serious before she can stick to a diet?

On and on the inner tape played. She is so busy ripping into herself that she doesn’t realize that a woman is sitting next to her. The woman is a bit older than her, but looks almost athletic, or, at least in good shape. She looks the way Madge has fantasized about looking someday. The woman also seems vaguely familiar as she smiles at Madge and asks her if she comes to the park often. Soon they’re having a conversation, and after a few minutes, the woman tells Madge something startling.

“It’s really no accident my being here,” she says. Madge’s eyebrows furrow as she wonders just what this woman is going to say next.

“This is probably going to sound a little weird,” the woman says with a kind smile, “but in a sense I am ‘you.’ I am your wise woman within, the you who has the ideas, the motivations, and the strength to create the life you want. I am your Wise Self.”

Madge clears her throat, and stares, wondering if she should get up and leave. I’m afraid I attracted some nut case, she thinks. Polite woman that she is, though, she doesn’t want to interrupt her visitor, which would be rude. The woman continues as if this is the most normal conversation imaginable.

Viv? Madge repeats to herself. She says she’s “me,” but she has a different name. Definitely a nut.

“So here you sit, most unhappy, lamenting your life,” Viv says, smiling. “It’s not a pretty picture. Let me ask you one question: What has been stopping you from doing something about it?”

Madge looks up blankly. “ What has stopped me from doing something about it?”

“That was the question,” Viv says.

“Well, I have tried and tried,” Madge says, realizing that she has willingly continued to chat with the strange woman.

“And what happened?” Viv asks.

“The Tale of Eating Beauty is a brilliant and inspiring approach to building self-esteem while taking on the challenge of obesity. What a clever book for our times. A must read, if there ever was one.” —CAROLINE MYSS, author of Anatomy of the Spirit Alifetime dieter, Madge has just about given up hope of ever getting out from under the power of food. Will she ever have a body she loves, not just in weight and size, but a body with energy, health and vitality? She is filled with remorse, anger and disgust, the day she meets Viv, a mysterious woman who offers to show Madge how to break free of the spell food has over her. As her journey unfolds, Madge learns that losing weight permanently begins by changing from within. Viv shows her how to accept herself and become conscious of choices and their consequences. Challenging useless beliefs, finding her own power, dealing with what sabotages her and developing her self-esteem are just part of what Madge needs to do. In the end, she no longer needs diets; she has become an empowered woman in charge of her life—and with the body she loves!

About the Author Jean Hausmann is a teacher and works as a wellness coach, specializing in weight loss. A dieter for many years, she eventually found techniques within herself to successfully reach and maintain her ideal body weight and live a life-style that supports real health and wellness. She has a masters degree with an emphasis in body, mind, spirit wellness and has studied many years with major teachers in the field. She recently graduated from Coach U. She designed and teaches a popular course at local colleges in Wisconsin and Arizona, “Weight Loss from the Inside Out,” which helps people learn the methods of transforming the interior self in order to change the exterior body. She lives in Wisconsin and Arizona with her husband and travels regularly to visit her children and grandchildren.