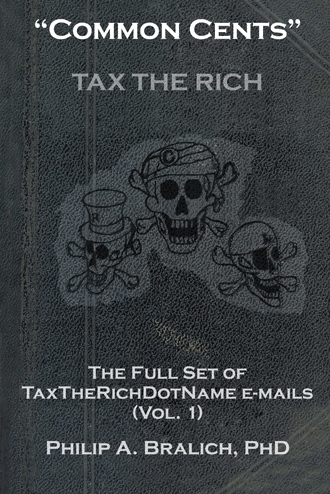 Growing up in a lower, middle-class family in the mid-west, my parents and other adults were all aware of the family of four income and what jobs and college majors would likely provide such an income. There was little interest in jobs that paid millions, but great interest in jobs that allowed you to raise a family, own a house and a car in a safe neighborhood with good schools, a hospital, a church and convenient shopping. In fact, an interest in wealth beyond that was considered tawdry at best and dismissed with lines such as, "We don't want that kind of money."

This was an outgrowth of the efforts of the World War II generation who came home from war to create an economy that included jobs with family of four incomes, security, 40-hour work weeks, vacations, insurance, retirement, pension plans, and social security. They provided good schools, immunizations and doctor's checkups for their kids, and they saw pets and family vacations as important to raising children. They also supported unions to help guarantee the whole family of four system. My father would leave work decisively everyday at five to go home for dinner and take care of his family. We always expected him at six minutes after five. His insistence on leaving not earlier or later than five was part of the discipline that the World War II generation agreed was necessary to create the family of four economy. It was not "greed is good": it was good-hearted and family oriented. It was the true right wing. The right wing that people feel nostalgia for that was destroyed by Reagan and the broken right wing that has followed him. It was not the right wing that would bury the family of four income and attack job security, 40-hour work weeks, vacations, insurance, retirement, pension plans, and social security. It was a generation that kept a wary eye on the wealthy, recognizing the sneers, spin and frozen countenances of the greedy.

Since Reagan all of that has diminished significantly as the wealthy have continued to take more and more family of four incomes out of their companies, their communities, and U.S. economy and put it in the pockets of the upper 10%. There is no excuse for it. It is not based on family values; it is not based on the family of four income; it is based on personal greed. Trickle down is as much of a joke to them as is the claim that cutting the taxes for the rich will create jobs. Both are snide dismissals of a thinking public who recognize that trickle down and cutting the taxes on the rich are merely more hands in their pockets taking away the wealth that they have rightfully earned and which deserves to go to their families.

The presence of ATM's saved banks billions in salary packages and yet rather than paying us 50 cents each time we use it, they charge us instead and think that we are unaware of the guile behind this. There are countless examples of the shiftless, cunning, conning mentality of the broken right wing but little as yet that we can do about it. They turn to us and say we are going to have to take cuts in Medicare and the minimum wage and shamelessly turn around and give themselves millions in bonuses for having done so. They turn to us and say, like Herman Cain, "Don't complain. Go out and get a job and earn your wealth." This jaded, sadistic dig is just one of many that are eating at the hearts of the American public. The wealthy look, act, walk and talk like perps and pimps because they are. Their targets, the American family, look, act, walk and talk like vics because they are.

They aren't that good. We are. They did not provide the talent, creativity, hard work, inventiveness, and social skills necessary to run a business. We did. They merely developed a set of financial tools to wrench the profits from us and line their own pockets. They lower the wages, remove benefits, raise our fees and then when we have the audacity to say my child needs a doctor or my grandfather is bedridden, and I can no longer care for him, they say, "You should have thought of that earlier. You should have worked harder." And then for the brilliance of those rejoinders, they give themselves another million dollar bonus and create a 9 figure income for a crony.

They are not making this wealth, they are taking it, and it is time to take it back. They do not grow their companies, their communities, or the U.S. economy: in fact the problems in America today are precisely the result of this shift in the distribution of wealth and this destruction of the inventor, the talent and the creative, and it is attributable to one thing and one thing alone: the greed of today's wealthy and their inability to make judgments about anything other than the size of their wallets and their next bonus. They could see Social Security running at a profit if they did not see a huge sum of money that they could transfer into their own pockets. They could realize that government jobs are good jobs if they did not see the government payroll as a target. If they did not have their hands and minds on everybody else's wealth, they could see that local, state and federal governments would be far more interested in creating jobs with family of four incomes than the wealthy would ever be. There would be no mansions or yachts to pay for if the government were creating the jobs. The right wing has gone so far off track as to see themselves as the new fascists and liberals as the new non-Aryans. Jesus Christ was a liberal, and we are all sure that he still believes in giving to the poor, not creating them. The family of four income represents a distribution of wealth that would be expected of a Christian country. The current distribution of wealth looks like the Rome of Christ's time more than anything that developed out of Christianity. 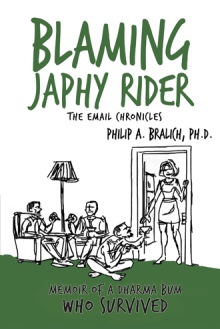 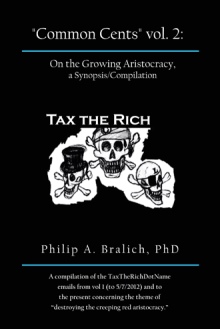 "Common Cents" vol. 2: On the Growing Aristocracy, a Synopsis/Compilation
Philip A. Bralich PhD
£5.89 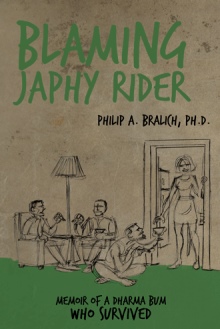 The TaxTheRichDotName e-mails evolved as an effort to draw attention and popularize the author’s view of a quick and easy solution to the problem of income disparity and the distribution of wealth in the United States today.  Specifically, that solution is to obviate the need for all of Marxist (both sides, communist and capitalist) idealism and all of aristocratic excess via movement to tax the rich thoroughly, profoundly, repeatedly, and punitively via the vote until the wealthy sit up straight, fold their hands on the table, admit they were wrong, apologize, and put the money bank.  Votes, not money, move the US system, and voters, not the wealthy, are the true authority.  There is no need to kill the aristocrats and no need to oppress the poor. All that is required is to tax the rich.

Philip A. Bralich has a PhD in linguistics. He spent many years teaching ESL and essay and research writing. He has much experience presenting at professional conferences and publications in theoretical syntax, ESL, and computational linguistics, as well as with professional business presentations, business writing, and grant writing.  He has had a thirty-year reading history (obsession) with root thinkers of Western and Eastern philosophy and psychology.