The Hidden Psychology of Pain

The Use of Understanding to Heal Chronic Pain 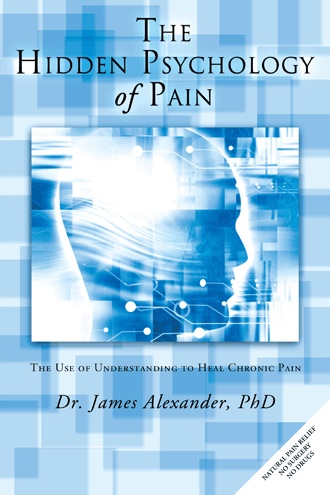 This book is about the experience of chronic pain, and more importantly, about the proposition that you can do something to either eliminate or radically reduce it. You will be presented with a theory of chronic pain which, although novel in the current era, actually has a long history. With the sophistication of modern biological science, we are now at a point in time where it is possible to verify much of this theory with current research based evidence. No doubt, despite the various forms of evidence presented, there will still be detractors- people who cannot or will not be open to what the evidence is suggesting. However, for those sufferers who are open to these possibilities, the potential for healing arises.

Research has made it clear that how we make sense of any particular health condition actually has a large role in determining our level of disability from it, the degree of pain we experience, and the ultimate outcome. While this finding is true for a broad range of health conditions, it is perhaps no more true than it is for chronic pain. Further, research demonstrates that how you view your condition is actually more important in determining the outcome than is the actual severity of the condition. The sense that we make of chronic pain, our beliefs about its causes, and our expectations of its course can be modified through straightforward psycho-educational processes, such as this book. Evidence confirms that information alone can have a positive impact on and lead to improvements with many health conditions. Chronic pain is a particularly good example of this.

Just how out of step with cutting edge medical thinking is the suggestion that psychology could have a large role to play in the causation of chronic pain? In discussing the role of psychological factors, former convener of the Australian Pain Society and Professor of Medicine David Cherry, recently acknowledged that the psychological factors which are relevant to chronic pain are often operating at an unconscious level. Although regarded as a ‘new’ proposition within medicine, this is actually a rediscovery of accepted wisdom from past eras. Hopefully, such recognition of unconscious psychological factors can again enter the therapeutic enterprise- this book is a step in that direction.

I will run the risk of alienating some readers at the very start of this book by suggesting that although your pain is unwanted, it actually presents you with the possibility of emotional healing. Despite chronic pain posing a crisis in many people’s lives, seen for what it really is, it actually creates an opportunity for healing of the whole person. This is not to glorify pain and suffering- my intention is to help you overcome it. But in so doing, an opportunity for the healing of deep wounds is presented. As a result, I am usually excited by the possibilities when I meet a new client who is suffering from chronic pain. They are often on the verge of some important self-discoveries, and the recovery process presents the opportunity to heal both physical and psychological hurts.

In discussing pain, we must firstly distinguish between acute pain and chronic pain (or persistent pain as it is often called). Acute pain usually results from traumatic injury. Body tissue, hard or soft, has been damaged, and pain is the typical response when the injury is substantial enough. We don’t like acute pain, but if we didn’t feel it, we would probably not survive beyond infancy. Acute pain has both great evolutionary value for our species, and greatly adaptive value for individuals. We tend to not repeat actions which result in such pain. This is positive, as such actions are likely to be dangerous for us, and we have a greater chance of surviving by not repeating incredibly dangerous behaviours. Most soft tissue injuries tend to repair in a few weeks, depending on the ability to rest the injury. Hard tissue injuries can take up to three months to repair, give or take some time due to other factors such as age, and general state of health.

A diagnosis of chronic pain should not be made until at least three months after an injury, when most forms of physical damage have actually been long healed.

Like many other people, I have fractured several bones and can testify to the healing capacities of the physical body. When I fractured three vertebrae in my neck a few years ago, the treating specialist said it would take around three months for the bones to heal and return to a full range of movement without pain. The first couple of weeks were very painful, and I was capable of little neck rotation. But sure enough, around the three month mark, my neck was back to a near full range of movement with no pain. X-rays showed the bones had healed. The internal inflammation, lack of rotation and the experience of acute pain kept me relatively still in the early weeks, and I only gradually increased my activity level as the weeks marched on towards the three month mark. These unpleasant symptoms gave my bones time to heal, allowing them to knit back together by keeping me somewhat inactive.

During this acute phase of recovery, pain is rarely considered a medical mystery. It is obviously related to an injury, and serves some kind of useful function in terms of slowing us down so that healing can occur.

Chronic pain is a different story- it lasts for much longer than the healing process requires. This book is about chronic pain, which is still often viewed as something of a medical mystery.

My country, Australia, is fairly typical for industrialized Western countries in regards to chronic pain statistics. One in five people here suffer from chronic pain. It afflicts people from all walks of life and employment groups. For the people who suffer the most, with each day taken off work due to chronic pain, many more days suffering with the pain at work will have to be endured. The total cost to the Australian economy from lost workdays, as well as health care costs, is nearly 4% of the GDP. While ongoing pain is experienced by a sizable minority, up to 70% of people report significant episodes of back pain during their lives.

These figures reflect the same trends for most Western societies. Statistics from Europe show that one in every six Europeans suffer from chronic pain, and the US Institute of Medicine of the National Academies reports that 116 million Americans are afflicted by this condition- this equates with around one in every three people.

It is apparent that chronic pain is a large scale human problem, and there are no signs of it abating yet. Curiously, chronic pain has not reached the same epidemic proportions in non-Western and non-industrialised countries, where plenty of heavy lifting still happens.

Like most people in our society, I have experienced occasional bouts of extreme lower-back pain, in addition to other forms of chronic pain. As such, I am fully aware of how excruciating and disabling this condition can be. At times, the pain has been so extreme that, had I not known better, I could have sworn that my back was literally ‘broken’. As is the case for most people experiencing this kind of pain, nothing could have been further from the truth, despite how it feels.

Chronic pain has been correctly described as the invisible crisis at the heart of contemporary life.

Despite stunning advances in other areas of medical science, no similar breakthrough in the treatment of chronic pain has resulted from an exclusive focus on the body. Dr James Alexander’s young life was redefined by a tragic car accident in his late teens, and the chronic physical and emotional trauma inspired him to become a psychologist. Now pain-free, Dr Alexander has dedicated the last three decades of his life to helping others overcome similar challenges, specializing in the treatment of chronic pain and psychological trauma.

His success is proof that recovery from chronic pain is possible, and this guide offers a valuable resource for working toward that goal.

The recovery from chronic pain requires that we revisit and challenge the outdated attitudes and practices that have been used with little result. With the proliferation of medical and psychological research, for the first time we are at a point in history where these notions of pain recovery can be validated by research-based evidence.

For too long, Dr Alexander feels, we have been looking in all the wrong places. Specifically, the problem lies at the core of our culture, which still treats the physical and nonphysical aspects of the human as separate experiences.

This innovative program involves a journey of self-discovery, a new way to approach medical and psychological care of chronic pain, and advice on the most effective types of help to pursue.

Dr. James Alexander, who holds a PhD in clinical health psychology, is an Australian psychologist in his third decade of practice. The chronic pain and emotional trauma he experienced as a result of a car accident at eighteen inspired him to become a psychologist, and he has dedicated his career to helping others overcome similar challenges. He currently lives in New South Wales, Australia.