The Spinning Tops of Light 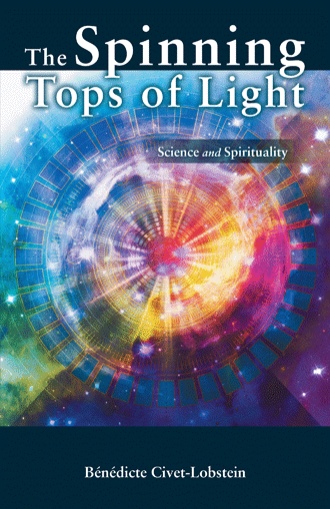 Every week, my grandfather used to send me a collection of his weird and wonderful stories. He was an impressive figure, rather austere and somewhat intimidating for a little girl like me, but, underneath his stern air, he was deeply kind and very funny.
I was seven years old. What a thrill it was to get his letters filled with stories I could forever impress my friends with. I would tell the stories, making doubly sure not to let on they were in fact my grandfather’s prose. I would pretend they were my own creations from my own imagination and inspiration. Forgive me everyone. Forgive me Grandpa. Years later, I want to write a story for him. There must be a willing angel who’ll pass on the message to him in heaven, where he must now be.

I was a teenager, in a car. A bolt of fear. A long tunnel leading to a light more extraordinary than the sun, unutterable, supra terrestrial, an instant of ecstasy, unconditional love, the film of my short life whizzed past like lightening as did all the synchronous feelings I had experienced. There are no words, no superlatives that can convey this.

The experience didn’t overly change me except that it removed absolutely all doubt about a Hereafter and a Divine Love. My faith in God and an unimaginably great Universe became my rock. I spoke to no-one about it. It was much later on that I understood the meaning of this extraordinary incident.

As I advanced in life, I sensed that all that is essential is invisible.

With intense fervor, I threw myself into exploring religions, the esoteric, astrology, numerology, tarot, energy healing, spirituality. I found out things that convinced me that, beneath these different facets, there is a unity, an everything contained in an all, a single, indivisible force. It spurs me on. I have understood that the quest is eternal and the most important thing is to take one step at a time on this boundless path.

Grandpa, I wasn’t inspired by one of your stories but don’t resent me for it. But others have helped me.

Well, unusual, in any case.

I met Alice, a childhood friend. We immediately started to reminisce about the past, about our old friendship and connivance. Each in turn, we told the story of our lives, our little secrets, our joys and our woes. As we spoke, it soon dawned on us that, over the years, we had both been driven by spiritual searching, both equally fascinated by the invisible and the essential. We told each other about our journeys. It was at this moment she told me something that would open up a whole new pathway for me. She was in touch with her deceased mother, Jacqueline, with whom she regularly conversed through a medium whose name was Lucie. The conversations mostly took place by telephone, because Lucie lived in a tiny village in the centre of France.

Alice had gleaned much information about the hereafter and had received answers to things we usually consider to be mysterious.

So what do you make of all this Grandpa? Sceptical perhaps… is it a joke? I’ll carry on with my story and you can tell me what you think later…

She gave me a transcript of her conversations and a telephone number. Here’s a preview of some of the headings she had written down:

God, Disembodied beings, Light Beings, the mechanism of life on earth, the brain, the supreme aim of Human Beings.

I was baffled and bewildered. What was this all about? And there was the telephone number. Would I ever dare to call?

I used to call you Grandpa, picturing you in your study, in your big armchair with your stern look. When you came to the phone I recognised your affectionate voice. But who is this Lucie? What’s she like? Where is she?

I needed to find out more about Lucie.

My friend Alice had known her from childhood. Lucie had been a frail, undemanding child and not very communicative. She did not accept her parents. Jacqueline, Alice’s mother, had played a bit role in her upbringing and had given her much love and affection. Lucie grew very close to Jacqueline with whom she developed a deep gratitude and friendship and to whom she devotedly offered her love and affection from the time Jacqueline fell seriously ill right up to her death. Lucie was devastated when Jacqueline died and she returned to her native village in the centre of France.

Several years later, she suffered a cerebral congestion and was in a coma for three days. It was then that she started hearing multitudes of voices, especially the voice of her friend Jacqueline. Lucie got better. She became a medium, transmitting messages verbally.

Grandpa, you know that I have always been interested in those intensely mysterious moments between life and death. I am always amazed by the people I support in end-of-life care. Where are they? What can they see? What do they feel? You know don’t you? But it’s a story that you haven’t told me yet…”

Alice spoke to Lucie on a regular basis by phone. Throughout the messages, she recognised her mother’s personality, her vocabulary, as well as the rhythm and intonations of her voice. It is even stranger because, in her normal state, Lucie suffers from dyslexia, gets quickly befuddled and is desperately shy.

She doesn’t like to be the centre of attention or talked about. However, she can channel four hours at a time at an accelerated pace only stopping enough time for people to ask questions.

What would you have done Grandpa? You were inquisitive. You were courageous. You used to tell me your stories from the Great War. And here was I with just a number to dial! I didn’t know Lucie. I didn’t know Alice’s mother who was apparently an awesome, erudite woman, an artist too and spiritually-minded. I bet she was impressive. I was nervous and anxious. But I did it…You’ll be surprised at what comes next!

My heart was pounding (it still does even now, even though Lucie has become a friend):

“I’m Bénédicte, a friend of Alice.”

A kindly yet timid voice replied:

“Hello. Alice told me you would ring. Here’s Jacqueline.”

The Spinning Tops are disembodied beings who coexist with us on Earth in an invisible, parallel dimension. They send us messages of love and peace, and they help relieve our anxieties. They support us on our way to perfect harmony and, ultimately, to God.
Lucie is the medium who delivers these loving messages. She withholds nothing … her mind is a blank page. The Spinning Tops shine through her like crystal, and she delivers their messages faithfully.
In these loving messages, the Spinning Tops explain how adversity and misfortune are repercussions of accumulated human negativity that counteracts God’s plan. God is perfect order, harmonious unity. Unknowingly, our minds wield forces that are disturbing the vibratory zones around the Earth, putting our planet out of balance, causing more and more natural disasters.
For all of us, saving the planet means first finding the courage to walk the path of wisdom, joy, happiness, and love of others. This is the eleventh commandment, and it is our responsibility to the future.
By not following the personal path you were given before birth, you disturb the terrestrial forces. By following your very own preprogrammed destiny, you are helping the Earth to come back into alignment.

After a near death experience, Bénédicte Civet- Lobstein explored monotheistic religions and Eastern philosophies, and studied psychic phenomena from the scientific and spiritual viewpoints. Her books record conversations with the invisible world, awaken us to our collective future, and contribute to the great work of raising our collective consciousness.