ET Presence The Role of the USA and New World Visions

Will the USA rise to its ultimate challenge 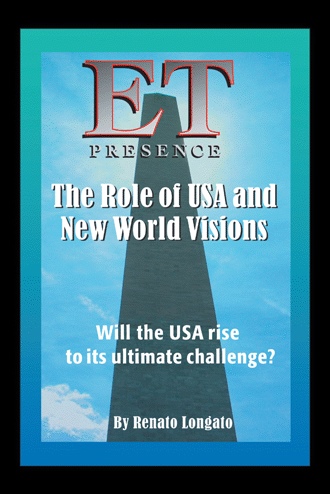 Contactees and the Day after Effect

The term “day after effect” is commonly used among people who have had similar encounters with extraterrestrials and do not belong to any psychological study. Any person who has gone through an expansion of consciousness, a spiritual awakening experience or a personal transformation with lasting effects on his life can also be touched in different ways. That unique moment can change a person’s life forever. It is difficult to explain with words, it is supra verbal. I would say that in the case of a physical encounter with an extraterrestrial it is quite shocking and momentarily disturbing for the experiencer. (The word experiencer was coined by the late Dr. John E. Mack PhD involving primarily abduction cases). An encounter can be a fortuitous or accidental event and would not be considered a contactee event. The individual that experiences one or more continuous pre coordinated encounters with alien(s) under certain terms and conditions that include psychic experiences can be considered contactee events. These close encounters can happen once or several times according to what the ET’s have in their consideration. Again, it is necessary to remark that the ET’s are the ones who are in control of the contact.

However, there are other aspects that we have to add to this complex issue. Everything points to the fact that the ET’s are constantly obtaining data from different individuals around the world. The contactees mentioned above are from different cultural backgrounds. Each of them reacted in their own way according to their social environment and personality. This is roughly to say that Enrique Castillo Rincon has something in common with Billy Meyer but the ways his close relationships respond to such an experience are different. Castillo Rincon is from a Hispanic, Roman Catholic country with a different cultural development with strong family bonds. Meyer is from a mainly Christian community with a more homogeneous civic and educational level whereas it is impossible to find tribesmen in a remote area of Switzerland it is common in Costa Rica. The same contrast we can say about Travis Walton and Claude Vorhilon. Now the other reason the ET’s established contacts in those countries was based on their stability and freedom of speech. The same cases would have more difficult in communist countries where a self-proclaimed, contactee could have been the subject of persecution and harassment by the ruling authorities.

From this perspective we can assume that those encounters also served as a laboratory to research how humans reacted to their experiences. It is not a surprise that, according to their accounts, the contactees found out that the ET’s knew certain aspects of their private lives or that the ET’s had been monitoring their lives before and in between the experiences. This obviously is a result of an intelligent project behind those incredible encounters. They are not just something random and poorly executed. There is an objective agenda behind them. The ET’s were using the contactees as informational tools to verify in situ the close and long term impact of their interactions. Let’s imagine for a moment that we are the ET’s in charge of monitoring the impact and consequences after a close encounter with a human and how he deals with it in real life. Here are some questions and scenarios: How will the contactee manage himself after a close encounter experience? Will he go public or private? If the contactee goes public, what kind of organization will he lead? An autocratic one? A democratic one or a laissez faire organization? How good is he at disseminating his experiences to others? How do he and his group manage to overcome obstacles or limitations? Why do he and his followers tend to create a cult or pseudo religion? What will the long term sociological impacts be of groups formed by contactees?

As we see, the possibilities and social dynamics originated by the ET’s are not only endless but a fertile ground to study human behavior confronting a phenomenon on a bigger scale. However, I have identified important aspects that we have to take in consideration in relation to the contactees and the groups formed as a consequence of the encounters.

Contact groups or “grupos de contacto” in Spanish are groups formed as a result of an extraterrestrial encounters to further the messages received. Broadly speaking, the contact groups are formed predominantly by Caucasians and Hispanics.

It is not a surprise that based on his background and relationships the contactee might decide not to continue the interaction with the ET’s thus avoiding a very lonely path that can affect his source of income and sentimental relationships. On the other hand the individual can alter his experience with mind blowing alleged encounters to gain notoriety and influence over the followers. Also in some cases depending on the encounter, the contactee may prefer to disseminate his experience at his own discretion due to his position in society. (To name one case, I have met in person a contactee from Central America who only talks in private about his one 25 minute encounter with a couple of human like aliens in the mountains of his native country). Interestingly enough once the ET’s discover the outcomes of their observations and studies, the results can be narrowed into specific patterns to understand how to approach humans in different environments and what to expect from them. At the very end knowledge is power, right?

I have to take into account that there are aspects of the ET and contactee relationship that were not considered before. In all these years I have met individuals with extraordinary experiences such as receiving automatic writings with coordinates related to UFO sighting locations among other information. In most of the cases the alleged contactee does not have the full idea of what to expect with his contact. As any other human being under such circumstances there are moments of doubt, challenges, and the confusion offered by other’s opinions. It seems that the natural human curiosity of being in contact with superior intelligent creatures plays an important role for the ET’s in keeping a fluid communication with the contactee. It is a sort of soft control that the incoming next communication from the ET’s creates - a feeling of expectancy and a positive attitude on behalf of the contactee and others capable of receiving automatic writings.

This contact dynamic can include camping trips to specific locations where the UFO’s are seen and where they display maneuvers to the delight of the people present. This kind of demonstration has a powerful psychological enforcement by itself among the witnesses. The displays are a result of their technological advancement usually with erratic movements and colorful lights. These high tech shows from the “space brothers” help to keep a constant amazement among the members of UFO followers and attract more future followers.
Another common aspect of the contact is receiving communications through automatic writing, messages about spirituality and esoteric knowledge. This makes the contactee look for information from different sources whether that is metaphysical, philosophical, eastern knowledge or new age. These alternative sources of information are the ones that influence the contactees and become part of the vocabulary known by the groups consolidated around him. These elements can create, within time, a belief system around the UFO followers with the inclusion of organized rituals as well.

However, there are testimonies of high strangeness events before and after a pre coordinated UFO sighting. Some of them are based on synchronicities which support the individuals involved with the experience as a confirmation.

Other countries have openly announced and welcomed the ET presence. When will America own up to the truth? Or will it be forced under exceptional circumstances to begin a communication with our cosmic counterparts? The author provides insights and historical references concerning the potential cultural impact of the extraterrestrial presence in this millennium with the USA as the leading country in the epicenter of economic, social and geopolitical changes. An official contact with an advanced society may bring opportunity or risk depending on how we face the challenges on our planet and most importantly within ourselves. This book summarizes more than thirty years of study and research about UFO’s and looks at the forthcoming possibilities.

Renato Longato is a Peruvian-American author, researcher and lecturer. He holds a B.S. degree in Law, and Political Sciences. His life changed dramatically after three consecutive UFO sightings in 1979 while living in Peru. Renato lectures internationally about the presence of extraterrestrials and how their arrival over the last 60 years has been hidden, ignored and covered up in the USA. Other countries have openly announced and welcomed the ET presence.