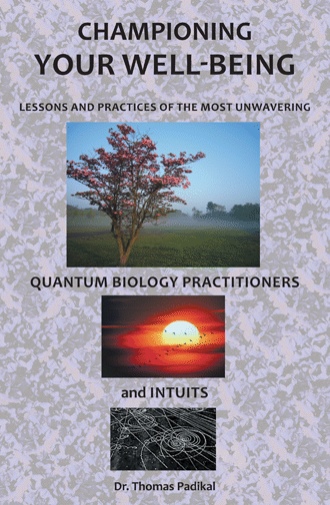 We are living in fast changing times.
Breaking from tradition, more and more individuals are taking the responsibility of well-being into their own hands. Like spirituality, it’s becoming a personal matter. As this trend continues, the bulk of healthcare will continue to evolve more into a form of learning endeavor with an engaging coach, rather than an impersonal brick and mortar hospital with imposing machinery or invasive pharmaceuticals ready to begin combat with a body that is perceived as running amok!

In reality our bodies are more like a finely tuned assembly of elementary particles that is a beautiful hologram, a dancing mandala, than a hiding ground where enemies lurk to assault and ambush us! The field of integral medicine is filled more with intuitive quantum biology practitioners with a deep awareness of the finely tuned holographic cosmos wanting to partner with you, than individuals who outwit or outsmart or manipulate you.

Even so, managing your well-being – even with an engaging coach – can feel unfamiliar, formidable or even intimidating. But there’s good news: you are endowed with some of the most astonishing tools and bequests in the cosmos. Some are hidden from view, leaving you somewhat of a stranger to yourself. In this book we take the sacred step of introducing you to you – the undiscovered self that you never met – using quantum biology as a looking glass.

An inquiry into quantum biology applied to the optimization of vitality and well-being, this book may be considered an introduction to practical applied quantum biology in vivo. In this book, the rigorousness of science is sacrificed for communicability. This book is not a substitute for scholarly study of quantum mechanics, biology or quantum biology.

Erwin Schrödinger was the first scientist to suggest a study of quantum biology in his celebrated book “What is Life?” It arose from a series of public lectures he gave at Trinity College in Dublin, Ireland in 1944. It had been thought for quite some time that Quantum Mechanics is not related to Biology – with the former describing nature at the inanimate microscopic level and the latter the living species which are wet, hot and big, not resembling an environment where quantum processes could prevail. Over the past decades however, life sciences have steadily marched forward, providing more refined explanations of macroscopic phenomena that stems from an improved understanding of molecular structures and mechanisms. Building on the pioneering work of giants like Planck, Schrodinger, Heisenberg, Einstein, Bohm, Boltzmann, Bohr, Bell, Bose, de Broglie, Feynman, Wheeler, Wigner and many others, today’s scientists are poised to explore Quantum Biology at a much deeper level. In particular, the fundamental nature of quantum mechanics in unifying the two fields can no longer be ignored! Indeed, as the landscape of these two vastly important domains overlap, “Quantum biology” is beginning to emerge. It could change everything “we know.” Future text books on biology may even begin with a chapter on quantum mechanics so as to unveil what ordinary biology is “hiding!”

In my own case, I worked for over 35 years in Radiation Oncology, considered a frontier of cancer treatment by many. As I worked closely with radiation oncologists, surgical oncologists and radiologists in designing treatments, and participating in patient follow ups, I constantly came across processes that couldn’t be understood by Radiation Oncology. These observations, in combination with my physics background, gave me the impetus to consider in vivo quantum biology as a viable area of clinical research. In 1999, I began to provide free educational consultations to cancer patients who were particularly curious about their ailment. I began to notice a modest escalation of quality of life (QOL) outcomes among them, mostly as a result of the decline in the deleterious side effects of the treatments. In 2007, these “workshops” were taken public. In 2010 Center for Vitality opened its doors with Quantum Biology at its basis as an intrinsic tool and Pulsed Electro-Magnetic Field augmented with quantum biology education as extrinsic tools. PEMF uses pulse sequences similar to that employed in Magnetic Resonance Imaging (MRI) but at much less field strength, about the same strength as the earth’s magnetic field. As we began to “apply” Quantum Mechanics to Biology unexpected results began to manifest. “Unexpected” in ordinary Newtonian Biology, but perhaps bit more comprehensible if discerned as consequences of in-vivo resonant electron tunneling, coherence, quantum entanglement, and associated phenomena in macromolecules – processes that may lead to recombination, recovery, and optimization of well-being. However, Quantum Mechanics describes the submicroscopic world with which we have little to no familiarity or experiential relationship. So insisting on receiving “Newtonian world” explanations that “make sense” of the “counter intuitive quantum world” may be futile! An extraordinarily effective veil, our biology masks nearly all quantum phenomena. However, the entire field of Biology is bound to undergo a paradigm shift brought about by the application of the principles of Quantum Mechanics. The strange duality and oddity is here to stay! Its ripple effects are already being experienced in healthcare.

For instance what if the Placebo effect is not an enemy, but a measure of the above quantum phenomena at work? Given the additional evidence from fMRI and PET-CT, it is a result of the quantum processes at work. It would be more fitting to recognize our inherent quantum biological nature and call it the Quantum Coefficient (QC) or the Holographic Cross-section (HC.) The fact that we are designed to be self-healing organisms – a SCQD – is not at all so farfetched! (SCQD is an acronym coined by the author for Self-contained Complete Quantum Device – more on this in the book.)

In the ordinary world of classical physics, it is impossible to lift yourself up by your own boot-straps. It appears the 2nd category quantum biology processes may make it possible to do just that in the quantum world! Since this is so “weird” in the ordinary world, creating pathways to appreciate them would be useful. This is a major reason for the frequent workshops on in vivo quantum biology where the participants are given opportunities to experience quantum biology in vivo. Given that the HC varies from person to person, however, the results achieved also vary from participant to participant. An important inquiry we are engaged in is to search for processes, mechanisms and methodologies that raise HC for all SCQDs – there seem no reason why it can’t reach 100% now and then! Hence my excitement!

Additionally, incorporating some of the most recent discoveries in cosmology has been very exciting. It gives a poignant perspective to our history, legacy and our lineage. Moreover, if the universe is holographic – a notion that is gaining credibility among scientists – then we are inextricably linked to everything in it. Seen through that lens, life is a delightful partnership with the cosmos. Since the observer impacts the observed, once you experience it your way of being will perceptibly shift. This is good news! When you gesture to the cosmos, the cosmos gestures back!

Even with the enormous work done in the last hundred plus years much work lies ahead. Yet, here is the point: given that there are no deleterious side effects to in vivo quantum biology, and given that there are varying levels of beneficial outcomes ranging from zero to hundred percent, the benefit-to-risk ratio is huge. This too is exciting: you have nothing to lose and everything to gain!

“While quantum biology is fraught with the strangeness of quantum mechanics and the complexities of biology, this introductory book is made comprehensible—and a fascinating read—by transforming it into an intimate subject matter for all human beings: In vivo quantum biology.
Readable, personal and intimate, this book is a must-study for everyone, even if you have no well-being issues. A pioneering work that is founded on a century of science, it is groundbreaking, practical, and filled with nuggets of quantum biological wisdom.”
—Douglas Kelly, MD, Tulsa, OK

From inside the book:

“… if one of your internal sub-systems (say for instance the pineal gland) has ten active centers, we can show its energy state metaphorically as horses drawing a chariot. If all horses are aligned as shown in the bottom row, the chariot will begin moving. However, if half the horses pull in direct opposition to the other half, as shown in the top row, the lack of alignment will result in no movement. Such dynamics in the sub-atomic world are given by coherence and phase. What if the onset of well-being (or breakdowns in well-being) has such humble beginnings in the quantum world?”

Dr. Thomas Padikal is a medical physicist who, working side by side with some of the most recognized names in oncology, has participated in the care and treatment of nearly twenty thousand patients in radiation oncology. Currently devoted to in vivo quantum biology, he sees education, coaching, and tending as his most sacred service to clients who access their innate capacity to co-create peak vitality and optimum well-being. You do not need to be a physicist, but being open to the “love and playful magic” of the cosmos may get things rolling! Non-invasive, it has no side effects, and it costs little to nothing!