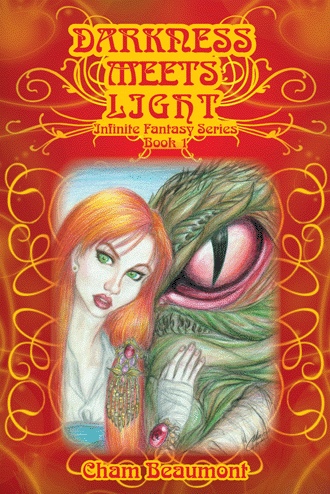 She opened her eyes to notice that it was almost dark. The sun snuck in its last light, which was reflected in the campfire. She smelled smoke and heard the crackle and pop. Cynthia heard the laughter and voices of Zell and Sebastian in the background. She turned away from the darkness of the forest to the pleasantness of the fire. .

“So, tell us what it’s like to be trapped by a spell,” said Sebastian as he took a drag. .

“It felt like my body wasn’t even there,” Tate answered. His voice was low and husky, which melted into Cynthia’s ears. “It felt as though I was in a dream. There was nothing all around me, just complete darkness. I didn’t know what day it was or what year it was. And when I was released. I saw a white light coming toward me. It was the same experience with the gods, only then I didn’t remember much of my trip.” .

“As though you were high,” Zell joked. .

“Ah,” Tate calmly said, “it was a feeling of euphoria.” He lit a smoke and noticed Cynthia was awake. The other two also noticed Cynthia had roused from her sleep and was seated on a dirty old blanket. She realized Tate was dressed in the kind of clothes mostly worn by foreigners—blue collar with thin red stripes, black leather buckle, loose black sweat pants, and synthetic tan boots. She couldn’t figure out if Zell and Sebastian had been carrying bags of extra clothes with them. On second thought, no, they weren’t traveling with anything else besides their weapons. What appeared on the ground were some supplies: cookware, cutlery, large jugs of brew, and more bags that held either clothes or sleeping blankets. She wondered if they had gone to a nearby town and brought back these supplies while she slept. Or maybe the boys had stashed them in the forest before they came to either kidnap her or—what was it? She couldn’t remember. Yes, she now remembered they were to guide her to the high priest and to a man who abandoned her at birth. .

While the boys chatted, Tate’s eyes were fixated on her. He studied her flawless features. And when she realized he was watching her, she glanced at him. To him, she looked innocent and a little lost, yet there is a slight bravery in her eyes. And to her, he was mysterious and handsome but extremely dangerous. His eyes moved to the bandage that wrapped her palm. He smiled, which meant 'Thank you for releasing me, beautiful,' and looked into the fire. .

She took the blanket and wrapped it around her body. She questioned how long their journey would be and when she would see her grandparents again. The thought of traveling with three complete strangers made her uneasy. She doubted she should trust them, remembering Sebastian had said Zell was going to take her virginity. She wanted to gather her belonging and flee from them, however they did save her from the army of Xenos, and if she traveled alone, his army would find her and try to kill her. She let out a long breath. Maybe it would be best to stay with them, for now, at least until they could earn her trust.

Billions of years before the Dark Age, the gods brought down their angels to punish the human for their sinful nature. The barbarian angels formed into humans and called themselves the Xerians, which means "To live, infinity." With the spell from the gods, the powerful race capture souls when anyone dared to look into the 'third eye.'  Pandora, the goddess of the planet did not approve the barbarian angels living in her world. With five drops of her blood on the moon, Pandora created her warriors, the five moon witches and ordered them to destroy the Xerians. The moon witches did not stand a chance against the Xerians, and they were all murdered. Due to the Xerians injustice behavior toward mankind, and titled themselves as the gods, the unkind gods vanished the powerful breed into Gaia. It appeared none of the Xerians were alive...

The story provided strong and interesting characters, betrayal, many twists which will target those who love thrillers, violent, sexual content, adventures, romance, and dark fantasy.

Darkness Meets Light tells the story of Tate Kidman, who is intertwined with the fate of the universe and was trapped inside a tomb by his twin brother, Xenos. A virgin witch's blood is the only hope for him to be released.

After ten years, Tate was released by a fire moon witch, Cynthia Redd. She is a fierce seventeen-year-old farm girl waiting for her adolescence to arrive when she finds out her whole life has been a lie. The pair started on an incredible, dangerous journey with two others to help find her estranged father and to reach a high priest. The travelers gain each other’s trust, receive wisdom, and overcome their obstacles.

Cham Beaumont was born in Thailand in 1983 and immigrated to Canada when she was five year old. Cham and her four siblings were raised by Christian parents and grew up in Edmonton, Alberta. After graduating from high school and enrolling in business administration courses through Nait College, she became a housewife. She and her husband have a two-year-old daughter and own Presa Canario dogs. Her stories are inspired by Canadian artists Sarah McLachlan and Jann Arden. Look for her upcoming novel Infinite Fantasy Series Book 2, Xerian Blood.