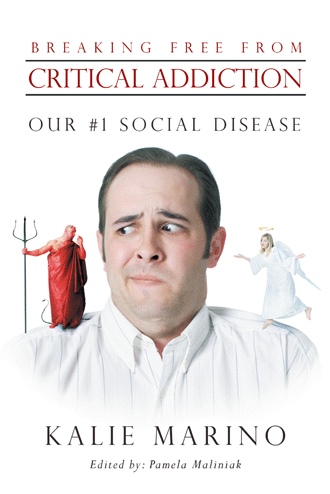 Criticism is a guilty pleasure that, once indulged, attracts the user again and again like an addict to a drug. Whenever the critic feels down or has problems, he or she uses criticism like a drug to feel better. It gives the user a false sense of superiority or power over others, even though that power is purely destructive to others and themselves. Not only are they attracted to being critical of others to feel better, but because critical energy is negative, they attract criticism to themselves as well. This perpetuates a vicious, self-destructive cycle as they become the target of criticism from others, lowering their self-esteem and causing them to become even more critical.

Although criticism is not a substance, it is as addictive as any drug, and I propose that it poses a threat that is actually more insidious. Habitual criticism has all the characteristics of a drug:

It is truly a social disease that affects whole families, organizations, and societies. Like drug addiction, criticism affects everyone; it affects the person criticizing, the person being criticized, and the people around them. However, there are many aspects of criticism and negativity that present a more insidious danger than drugs, for the reasons that follow.

We are not born critical. Criticism is a learned behavior that does not serve us, yet it is widespread, destructive, and goes unrecognized and undiagnosed as a highly communicable social disease. There are two primary ways we learn criticism: we learn it through our culture, and we learn it through traumatic experiences, which teach us fear and distrust.
There are millions of sufferers who believe that a critical state of mind is a necessary part of being responsible, simply because they were taught to criticize at an early age. This belief has been passed down through generations.
Many people are taught there is something innately wrong with them and that being self-critical will help them improve and become better people. They fear making mistakes, which makes them critical of everything, looking for possible problems as a way to prevent them. Some believe they have to be better than others just to be worthy, so they are constantly comparing and/or competing to prove themselves. Social values support these and other false assumptions, spreading this communicable disease, while criticism erodes the self-esteem of everyone it targets.

Critics are usually people who express the desire to “be good” and “do the right thing.” However, no matter how hard they try or what they do, they never feel good enough and never think they have done enough. They must live up to some imaginary standard that seems to constantly change and exist just outside their reach. Sometimes they take solace in the faults and inadequacies of others so that they can feel better about themselves.

Some addicts are self-critical, while others are so afraid of being weak or inadequate that they deny their own mistakes or perceived shortcomings and focus all of their criticism on others. But under this veil of secrecy and denial (and even the appearance of superiority), these critics share the same feelings of inadequacy as the ones who are self-critical.

Habitual criticism paired with negative thinking has gone unrecognized as an addiction in itself, because it is not based on any external dependency and cannot be evaluated on appearances. Critical addiction is an addiction to a thinking process that distorts awareness, destroys self-confidence, and interferes with the ability to enjoy life. Addicts have difficulty enjoying life, because they must be constantly on guard against making mistakes or being the victims of the mistakes of others. Understanding critical addiction is necessary for the healing of all addictions and social problems. We cannot have peace or real freedom until we see life from a life-affirming perspective.

When we look back with nostalgia on the good old days, we usually remember a time when people appreciated what they had and what they could do. Life was simple. Today, thanks to television and the Internet, we know more about the world and different lifestyles. This is wonderful if you find appreciation for our collective differences, but it is painful if you compare yourself to others. Critics make comparisons, focusing on what they don’t have and can’t do, instead of noticing what is possible and seeing life from a perspective of abundance.

We are happy when we appreciate what we have and feel grateful for what we can do. This is an attitude of gratitude that is available to everyone while we enjoy the process of creating a better life. We need only to change our perspective—but to change it, we first need to identify the problem and value seeing things differently.

We also learn to be critical as the result of traumatic experiences that leave us with a negative outlook on life. Our society has increasing numbers of people involved in combat, crime, violence, and child abuse who suffer from post-traumatic stress disorder (PTSD) and other forms of trauma. They need professional help to heal. However, trauma distorts perception and causes problems in every area of life, including employment. It is often the people who need help the most that do not have the health care resources to obtain it, resulting in more crime, violence, and drug dependency, perpetuating the problem. Therefore, health care reform is a matter of national security and far less expensive than building more prisons.

I want to add a special note here about illness. It is important to acknowledge that it is more difficult for a sick person to be in a positive state of mind than a healthy person. Because of the direct relationship between body and mind, toxins and disease take a toll on the mind. Some diseases and energy imbalances are especially toxic to the mind, causing people to feel anxious and depressed. Dehydration can also cause depression. So, it is important to drink plenty of water, eat healthy foods, and exercise as part of healing the mind of negativity.

That being said, even though it may very well be more difficult for a sick person to be positive than a healthy one, it is absolutely essential for sick people to take charge of their minds and turn their thinking around if they want to make a full recovery. The shift will help them get well faster and open the door to the possibility of full recovery, instead of just masking symptoms or experiencing temporary relief. We get sick from the outside in, but we get well from the inside out. Our thinking has a huge impact on the body, and focusing on the positive is what plants seeds for miracles. Anyone can do the Four Steps to Freedom found in part three of this book, even if they are ill.

Critical addiction, a social disease we catch from others, is the underlying cause of all addictions and most social problems. Yet it sweeps our world unnoticed—creating an epidemic of immense proportion and leaving chaos in its wake. The roots of critical addiction are perpetuated through our Inner Critic, who finds fault with others and ourselves.

Breaking Free from Critical Addiction clearly explains causes and symptoms of critical addiction. Using the Four Steps to Freedom, it then offers relief from your Inner Critic’s tyranny. This mental detox prepares you to create a life you enjoy. After all, you can’t brew good coffee in a dirty pot! That’s the real secret.

Kalie Marino’s masterpiece paves the route to dissolve individual and global self-defeating ways with stories, physics, and age-old wisdom set to the tune of inner and external peace. Be prepared for your Inner Critic to be transformed into an Inner Coach with a new set of songs, all in the key of gratitude.

“Perhaps you are very familiar with your Inner Critic, but the two of you have never been properly introduced. Kalie aptly makes that introduction and then skillfully speaks to both of you throughout this book, inviting you to make peace with the mental roommate that pays no rent and was never really invited to stay in the first place. She invites you both to grab a seat and have a listen. It will change your world and the world of those around you.”
- Pamela Maliniak