What Love Can Do 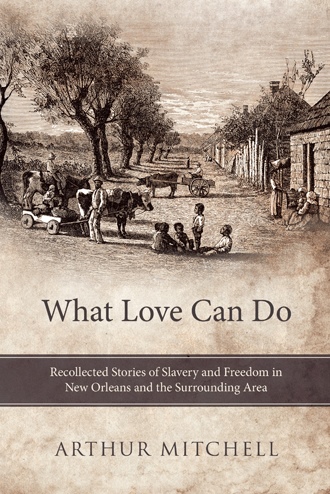 Very much the story-teller, Mitchell’s descriptions are precise and illuminative, often capturing the original raconteur’s nodding of the head or exuberance in relating the point. Although the story begins in the third person, with a narrator (Mitchell himself), it often slips into a first-person account, clearly repeating words he had heard directly from the source. Rarely does he indicate direct quotation or even seem to notice the transition from his own voice to that of another. Typical of an oral culture where story-telling recurs in relatively small segments, repeats and double-backs upon itself, Arthur Mitchell’s stories at first seem somewhat disconnected and disjointed, even confusing at times. However, I soon discovered that, also characteristic of an oral culture, each time the story recurs, another dimension or connection becomes apparent. It is possible that writing in 15-minutes segments, Mitchell may have retold sections already written. However, the story which begins with a general and somewhat confusing overview becomes more clear and connected with each re-telling.....

The man whose name this story bears was named at birth Henry Goody Jons after his slave owner’s father, the grandson of a French immigrant whose name was Artee Jons, who was known as Master Jons. Whose mother was a captive African girl whose native name was Abli-bo-bee bought off of the slave block at the Carbildo in New Orleans in the eighteen twenties by Mister Artte Jons of whom she beared three children for.

The first born was named Henry Goody Jons, but since after the Civil War his father gave the whole place or slave camp to his former slaves which had temporarily been a plantation where those people were given the house land wherein they dwelled that became Jons Town (Village) and the church was also named the Jons Town Baptist Church. All were carrying the name Jon in appreciation for the kindness shown them then and long before his French wife died by falling off a horse and before he bought that beautiful little African girl and before the Civil War. So when he became the pastor of the Jons Town Baptist church he didn’t want his name “Jons” to come in conflict with the name of the church and town consequently he changed the spelling of his name from Jon to Johns.

The whole thing was named after the former master’s grandfather’s last name (family name) who came to this country on an immigrant ship along with many poor farmers from through out Europe, but on that particular ship were three brothers with their three families who were Jon brothers. The younger brother Artte Jon was a lawyer but was also on the farm for lack of work in the law practice in his country. And the Jon brothers were given three hundred acres of land each which gave them a nine hundred acreage of land well more then enough for a small town or village as it became Jons Town which was previously a plantation converted from slavery after the civil war then into Jons Town. There were two other plantations one on either side about two hundred acre farms combined with the Jons Town Village which gave the town an acreage of some fourteen hundred acres.

The slaves living on the Jons Place were so free or rather almost free, so much so that slaves ran away from other places to get there they lived in two and three room dwellings, with rough wood floors and a small porch in the front whereas most other places had two rooms no porchs and dirt floors. However for some unknown reason for the better, or worse? it was said that the African girls were pretty and so nicely built that they were almost unresistible which may not have been the best thing for them, because of the lust mixed with the sexual greed and power, and the world-wide aspect of that day of slave owner-ship of people as a piece of porperty like a house, a tree, an animal or people (slaves) you may do as you please with your property; is when they are slaves otherwise they are just sujects if under a king, dictater, chief or system.

Those people were captured from somewhere in east central Africa along the Tanganyika Lake, where there was a lot of fresh water which was about the largest fresh water supply in all of Africa. There are a few rivers not to far away, but they ever so often dry up during very hot months, but the lake is so long and very deep that it never goes dry. As far as we know. Which gave them a large fresh water supply for drinking, and fishing and many eastern African tribes had situated themselves along the Laik because of the host of small and rather large fish, where men and boys did whole lot of fishing mostly at night in their own built dug out boat by cutting down very big around trees and somehow they found away to split those trees in two than did whatever it took to dig out and shape that half log into a boat. Each boat shaped and styled by their individual liking, every man’s styled his different from all of the other boats among them, however long it took. They built those boats anywhere from ten to twenty feet long, and about ten feet wide. They would cut, shape, and style with all their hearts in so much that each person of the family young and old, recognize their boat on sight because of the style wherein they were built. And these boats were passed down from father to son. However, they had to be very careful not to dig to deep, or to wide into the sides of it. They said building a boat was like bring up a child, once it gets started you can’t stop until it is grown.

In this invasion there was a girl so very beautiful being kidnapped. She was so pretty and well built that the boat captain ask her name, she said my name is Ablibobee. She looked so good that she was sold for a very handsome price who later became the mother of Henry Goody Jons, who was later known as Pastor Johns.

Of course many of those captives choose death rather than slavery by refusing to eat or drink any thing, you just can’t make a person do any thing short of death. Some even jumped overboard in open seas with little or no hope of survival saying I would rather die than live in bondage. The rest of them did surviv the trip and was customarily walked to the New Orleans Carbildo from the boat which was about five blocks.

Henry Goody Johns was the eldest son of a beautiful young slave girl from East Central Africa and her Louisiana Master. Given the choice by his father to pass for white or to remain a slave, Johns chose to forever identify with his black mother and siblings, later becoming a pastor to his community after the Emancipation Proclamation.

This volume of stories about Henry Goody Johns, who taught his people "What Love Can Do" is oral history at its best. It has been passed down from a generation of an enslaved people who came to learn that prejudice and hatred is a greater form of slavery than bondage itself.

This memoir as written by Arthur Mitchell, a descendent of slaves on the Jons Plantation, has been preserved as closely as possible to its original form.

Arthur Mitchell was born in Irontown, Louisiana, on August 24, 1915. During his early childhood, he moved with his family to the French Quarter of New Orleans. There, he and his siblings sat around a coal or wood stove at night, listening to family stories about the descendents of a beautiful young slave girl from East Central Africa sold in 1810 to a French farmer in the New Orleans area.

Later, Mitchell realized that the stories so precious to him needed to be preserved after his death, and he began writing them down in fifteen-minute segments during his work breaks at the Cabildo in New Orleans. His original 150-page, hand-written memoir was lost in 2005 during Hurricane Katrina, when the levee broke just two miles from his house in the lower ninth ward of New Orleans. Fortunately, one copy was preserved by Gayle Nolan, who has edited and prepared the manuscript for publication.