The Religion of God (Divine Love)

UNTOLD MYSTERIES AND SECRETS OF GOD 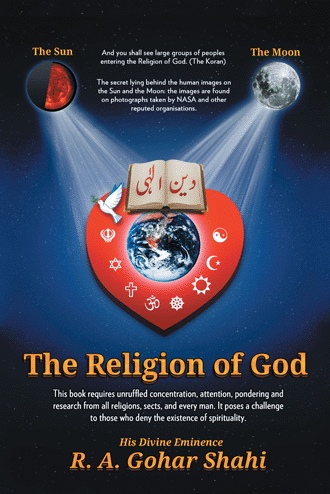 To recognise and reach God learn spirituality no matter what is your religion.

The excerpts from the book for quick awareness:

1. Those who love God but do not practise a religion are better than you if you follow a religion and yet are deprived of God’s love.
2. Love relates to the heart. The word, “Allah,” when synchronised within heartbeats, reaches all veins and arteries through the blood and revives the souls. Then the souls, engulfed by God’s name, “Allah,” enter God’s love.
3. All names given to God in all languages are worthy of respect. However, God’s original name is “Allah,” which is a word from the Suryani language. The creatures of empyrean speak this language. The angels call upon God with the name of “Allah.” “Allah” is attached with the faith declaration motto of every prophet.
4. Any person who, with all the sincerity of heart, is in search for God, on land or in the sea, is worthy of respect.
5. Many Adams were sent in different regions of the world simultaneously. All Adams were moulded from the clay in this world, for except the last Adam who was moulded from the clay in paradise, and is buried in the Arab region. The angels did not prostrate to any other Adam for except Adam Safi Allah. And Iblis (the Devil) developed enmity for the progeny of Adam Safi Allah only.
6. There are seven different sub-spirits in the human skeleton, and each relates to a different realm, a different paradise, and different functions in the human body. If these sub-spirits are empowered with God’s light (Noor), they may appear in human form in many places simultaneously. They may reach the esoteric gatherings of the saints and the prophets, speak with God, and even see God in person also.
7. There are two different types of religions for all humans: the religion for the body, which expires when the body does, and the religion for the soul, which existed even in the primordial time—that is God’s love. And only this religion elevates humans.
8. Ishq (Rapturous Love) of Allah is above all other religions, and seeing Allah is above all forms of worship.
9. Information on how human beings, animals, plants, and stones were brought into existence, and why something is prohibited or permissible.
10. Who pre-existed the Amr Kun (the command “Be”) of the souls and the angels? Which dog will enter the paradise in form of Qatmir? The souls of which individuals had already affirmed the declaration of faith in the primordial time?

The secret of which man is not mentioned in this book?

His Divine Eminence Ra Riaz Gohar Shahi empowers hearts of all aspirants with enlightenment and love. Spiritual grace and bounties of His Divine Eminence cover the whole of humanity barring none irrespective of individual religions and faiths.

His Divine Eminence Gohar Shahi has worked miraculously well on the Muslims and enlightened their religions understanding with His doctrine of love and global peace. Spiritual sciences and introduced by His Divine Eminence play a pivotal role in curbing global terrorism and crimes of communal hatred.

His Divine Eminence provides the deserving aspirants with practical teachings of spiritual sciences, elevating their souls to the divine level where they may enjoy God-realisation and Self-realisation to its culmination.

Images of Jesus Christ and His Divine Eminence Ra Riaz Gohar Shahi have become prominent on many celestial and terrestrial bodies such as the Moon, the Sun and the Holy Black Stone.