EOIH'S VOICE IN THE WIND

A Guide to Higher Consciousness and Life After Death 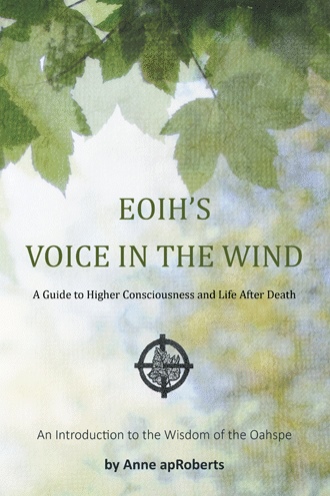 The Creator Describes Himself – Chapter I

The Creator describes Himself as everything, not as a man or a woman, but as a force that is positive and therefore called He:

All was. All is. All ever will be. The All spoke and Motion was, and is, and ever will be; and, being positive, was called He and Him. The All Motion was His speech.

The voice of the divine expresses itself within the motion of everything. That motion of all life is the music, the symphony of the Creator singing all life into being. The rush of the river, the wind underneath the wing, the dance of the trees and grass on a summer breeze, the roar of the ocean, and all the songs of life are the Creator’s speech.

He said, I am the soul of all and the all that is seen is of My person and is My body.

The omnipresence of the Creator means we are never alone. There is nowhere to hide; there is no thought that is truly private; and there is no action that is unseen. We are not separate from the Creator. We are a part of the Creator, and as the famous quote from Desiderata says, “You are a child of the universe, no less than the trees and the stars.”

All matter is composed of particles that we cannot see with the naked eye. The motion of the atom is what holds life in form, determines the form, and is the energy of the form. Taking the unseen power a little further, most of us know that love, kindness, fear, and greed are powerful forces that literally rule the world. We also know that thoughts and feelings affect the world at the atomic level, as well. The subtle, or unseen, is the source of all we know:

With these two entities, in likeness thereby of Myself, I made all the living; for as the life is the potent part, so is the corporeal part the impotent part. Chief over all that live on the earth I made Man; male and female I made them.

And that Man might distinguish Me, I commanded him to give Me a name; by virtue of My presence I commanded him. And Man named Me not after anything in heaven or on the earth. In obedience to My will he named Me after the sounds the wind uttered, and he said, E-O-IH! This is now pronounced Jehovih and is written thus:

By My Presence I Create – Chapter II

The Creator tells God that it is time to teach humanity how the spiritual worlds operate and our relationship to them. In this quote the Creator describes Himself as the quantum field:

Jehovih said: By virtue of My presence I created the seen and the unseen worlds.

Creator is the very fabric of creation, not an entity that stands apart from its creation. Quantum particles are omnipresent.

By the presence of the divine, Man is inspired to language.

And I commanded Man to name them; and Man named the seen worlds Corpor, and the unseen worlds Es; and the inhabitants of Es he called sometimes es’eans, sometimes spirits and sometimes angels.”

The phrase “I commanded Man” raises questions about what kind of a presence would command us to do something. Perhaps we need to look at the meaning of command in a different way. By virtue of the presence of Jehovih, all things exist and move, grow, and change. The Creator is not like a man in the sky commanding the clouds to move or the planets to spin. It is an innate and intimate presence that orchestrates, inspires and moves all life. By its presence it is everything. By its presence it commands everything.

The following quote offers an interesting perspective about death. We were given physical life to learn about physicality, and we were also given death as a gift to allow us freedom from the burdens and limitations of physical existence. As we outgrow the physical world, we move into the spiritual worlds. This life and the next are necessary, natural steps in our evolution that bring us to another level of understanding in which we can live within the greater worlds of the infinite universe:

Corpor, Atmospherea and Etherea are the three kinds of worlds that exist throughout all Universes. Corpor is the physical world we as mortals on earth live within. The heavens of earth are called atmospherea. Atmospherea is divided into three main levels of density or dimensions, known as the first, second and third resurrections. The word “resurrection” simply means to rise from the dead. We cannot live in the spiritual realms unless we pass through death. Then we find that we are resurrected, for we are alive in spirit form and death was only a doorway into the next world.

Es (the unseen, spirit) I divided into two parts, and I commanded Man to name them; and he named one etherea and the other atmospherea.

The space beyond atmospherea and the earth’s vortex is called etherea. It is composed of the space between the celestial spheres and is the most rarified and potent of all space

The densities or dimensions of Etherea are divided by forms and gateways, and arches of time and space.

Etherea is composed of a substance called ethe, which is the most rarified of all substance, and therefore the most powerful. Ethe exists within all things and in the midst of all dimensions. In its densest form, ethe is in physical matter. This may be the quantum particles that new science is talking about. Ethe becomes more rarified through the levels of atmospherea and into etherea. And yet, non-physical ethe exists in the midst of the physical worlds. Sentient life exists within all levels of life, from corporal to etherean:

For the substance of My etherean worlds I created ethe, the MOST RARIFIED. Out of ethe I made them. And I made ethe the most subtle of all created things, and gave to it power and place, not only by itself, but also power to penetrate and exist within all things, even in the midst of the corporeal worlds. And to ethe I gave dominion over both atmospherea and corpor.

Not infallible is this book, but to teach people to hear the Creator’s voice and to see the heavens in full consciousness, while still living on the earth and to know what awaits them after death.

In the late 1800’s mystics from around the world brought forth enlightened perspectives and sacred texts that have set the path for our modern mystical traditions, including the Theosophical Society, the Spiritualists movement, Rudolf Steiner and Anthroposophy, Christian Science and the Unity Church to name a few. OAHSPE was also written in the late 1800’s, and it shares many of the same perspectives.

EOIH’S VOICE IN THE WIND illuminates the teachings of OAHSPE and the deeper meaning inherent in the original writings.

It teaches us how to develop our higher consciousness, how to understand our interrelationship with the spiritual dimensions, how to deepen our relationship to the Creator and it explains the many phases of our journey into life after death.

EOIN’S VOICE IN THE WIND presents universal wisdom that transcends contemporary perspectives, and it speaks of multidimensional realities co-existing with life on earth through an interactive hierarchy of angelic beings.

Anne apRoberts has spent most of the last 40 years living in the Oregon wilderness helping to create the Order of the Trees, a spiritual community modeled after the teachings of the Oahspe. She is presently the head of the Order of the Trees. She has been trained in herbology and many healing modalities. She is a gardener, a chief, and a jack of all trades.

Anne arrived in Oregon in 1975 at the age of 25. She wanted to help the earth by creating a way of life that would inspire others to live sustainably and find their connection to the soul of all things.

She is still living in the heart of nature and she wants you to know that it is possible to live sustainably and to deepen our connection to the soul of all things, every day.

She can be reached through our website at: www.eloinforest.org