My Encounters with the Spirit World 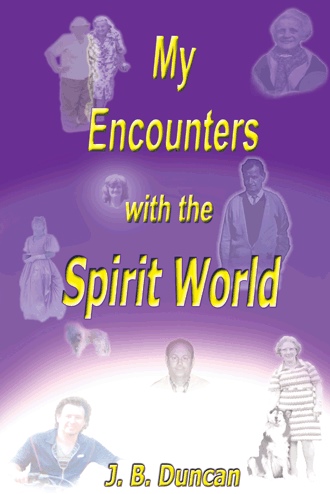 Do you know what it’s like to talk to spirits?

Have you ever seen a ghost, or wondered what happens to our loved ones when they die?

Medium and Psychic, Joyce B. Duncan, can not only talk with spirits, she can see them too!

With over 40 years of spiritual and psychic encounters, Joyce has met with many people, touching their hearts and lives and connecting them with their loved ones on the other side. One day her son asked her to stop these “devil practices” and send the spirits away. Because she loved him, she did, closing the veil she’d worked so hard to open.

In 1997 her son died in tragic circumstances, only now, she could neither see him or speak to him as once she could. Devastated, she begged Spirit to return her gifts, but it seemed her prayers went unanswered as time dragged on.

Then, two years ago a Spirit-lady came to her and said she must record her spiritual experiences in a book, for Spirit has a message that must be shared among the developing psychics and mediums everywhere – one she herself knew all too well: Never, ever give up your gifts. She began writing straight away, for she was also promised that for every account recorded, she would receive one of her gifts back. My Encounters with the Spirit World is the realization of her life’s dream, a journey of happiness and sadness, a wealth of knowledge and often, deeply personal. Share the experience with her…

J.B. Duncan was born in England in 1940 and migrated to Australia with her parents and three other siblings in 1951. As a child she didn’t realise she had any ‘gifts’, even after seeing her first vision at the age of eleven in her new homeland. It wasn’t until her later years when she developed her psychic awareness and understood what it was all about.

When she was fifteen she correctly predicted to friends that she would, “have a boy first, then a girl, another boy and, lastly a girl.” She married Clive in 1961 and over the next nine years had four beautiful children; a son, Arthur, a daughter, Debbie, a second son, Kevin, and the youngest, another girl, Christine.

In her late twenties she came to terms with understanding that there was ‘something different’ with her emotions, and in the way she could sense seemingly impossible things happening before they came true. She yearned to know more about the spirit world and threw herself into learning everything she could about it.

She discovered there was a spiritual church in the suburb of Parramatta, not far from her home of the Hills district west of Sydney, and started to attend its services regularly. An open circle was held there weekly and eagerly she participated in them, gaining insight to meditation, spirit communication, even channelling. She knows that without this training she would not have been able to complete this book, for many of her abilities were developed through it.

Above all, she came to realise that spirits – our loved ones in the unseen – can help us. They never leave us despite the death of their physical bodies, because they love us.