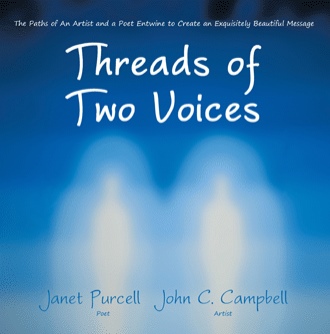 Two ordinary individuals on separate spiritual paths share their insights each in their own unique way.   “Threads of Two Voices” could easily be two separate books and yet combining them into one teaches us how two seemingly different expressions can actually be a common story.  Janet Purcell a writer, shares her insights with words, while John Campbell, an artist, shares his insights with pictures.  John’s pictures (Spiritual Abstractions) have been arranged in order of his choosing as Janet's poetry (Spiritual Metaphors) has been arranged in the order of her choosing, then interlaced, showing one opposite the other. Now it is for you, the reader to discover the relationships and underlying message.

Both visionaries believe that to fully appreciate what art and poetry offer, one must see beyond what is actually there.  This means seeing with your inner eye and hearing with your heart’s ear. It means opening your spirit to the message that lies within each series of words and each collage of color. To do this, the reader must take time, find solitude and reflect on the deep meaning that the stimulants in this book provide. The words are not necessarily related to the art, it will be up to the reader to feel either a connection or a separation.

To fully experience this material, the authors suggest that the book can be read in several ways. On the first reading, you may choose to only view the art. For the second time through, you may read the poetry. When you pick up the book for a third time, you’ll be ready to ask yourself questions about the two voices.  How are they the same? Different? How do they resonate with your own ‘voice’ or feelings?

After an interval of time, look though the book again and see if you can find words for the pictures and pictures for the words.  See if the expressions feel different to you now.  Is it more familiar or is there some discord?  Explore these feelings and see where they take you and what new threads of insight you receive.

When you learn to listen to your own voice, you are empowered to live in harmony with yourself.  It is through this path of self-discovery that divine love evolves, leading you to the light.

Visions of modern-day mystics—this is a poetic metaphor for the journey that guides the reader into an inner landscape of rich images and contemplative expressions. This book is a wonderful work for those who seek to integrate the wisdom of the dream into the reality of their lives. The poetry and art harmonize together in a uniquely inspirational marriage -- this is not your ordinary coffee table book.   Read and experience the creative energy, and let their images awaken you to the dance seeking expression in your own life.

Janet Purcell and John Campbell are two unique individuals who have collaborated on a spiritual and artistic endeavor to create “Threads of Two Voices”.  The melding of their works has produced a one-of-a-kind book which takes the observer on a journey with inspirational, thought-provoking messages that complement the beautiful art work with its dreamlike images.

Janet is a Life Coach and Spiritual Counselor.  She has a clinical practice in Phoenix, Arizona where she currently resides with her dog, Barney.

Janet’s search for inner connection brought her to a crossroads in her life when both parents became ill at the same time.  While driving one morning to her government job Janet uttered a prayer, “I’m at a crossroads in my life, I need some help”.  Shortly thereafter, Janet’s life became a personal quest for the inner truth of who she is and how to connect with this truth.  Born out of this personal journey is a person who changed professions, became a Reiki master/teacher, acquired certification as a Life Coach and Spiritual Counselor, and graduated from The New Seminary in New York City as an Interfaith Minister after two years of study and training.

Janet’s poetry and her approach to writing come from a deep spiritual connection. Her metaphors carry with them messages that are multifaceted in meaning resonating differently for each reader based on his or her own experiences and personal journey.  Her poetry carries a message of love, hope and gratitude to inspire a path of personal growth, reflection and awakening in those seeking a sense of spiritual enlightenment and peace.

John is an artist, energy healer and software engineer. John is also a Reiki master/teacher and has received extensive training in many energy healing techniques.  He currently lives with his wife in Phoenix, Arizona.

When John was young his family played a game called “Scribble Draw”.  One family member would scribble on a piece of paper and another would create a picture from the scribbles.  This game taught John to see patterns in the midst of chaos and inspired his method of painting.

John’s art starts by splashing colors on a canvas, rather like the scribble drawings of his youth.  He uses his intuitive sense and his technical art skills to translate these color splashes into an work of art he calls spiritual abstraction.  John developed this skill of translating intuitive feelings into material results as an intuitive thinker in the analytical world of software engineering.

John’s spiritual studies of Eastern and Western religions have also shown him that there is a common thread throughout humanity, a singular voice separated only by different words.  John strives to show this common thread in all of his art work. This is the inspiration for the paintings he refers to as “spiritual abstractions”.  Using his energy skills, John attunes his paintings to heal and inspire others. It is his hope that the paintings will awaken that sense of spiritual wonder that dwells within each of us.