My 52 Weeks of Worship 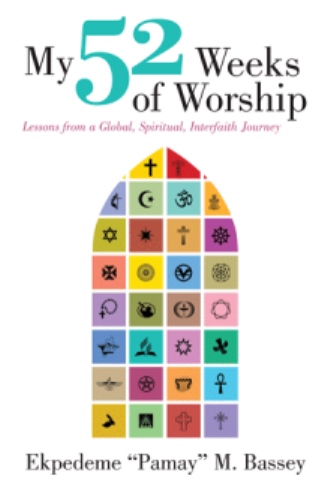 Introduction At the beginning of 2010, I was moved to take a spiritual journey—to visit a different place of worship every week—whether that place of worship reflected my religious tradition or not. I visited sixty-one churches, temples, mosques, shuls, synagogues, living rooms, and gathering places in the United States, Mexico, the United Kingdom, Nigeria, and South Africa. Why? Why spend time worshipping side-by-side with Jews, Catholics, Muslims, Protestants, Scientologists, Jehovah’s Witnesses, Unitarians, Quakers, Mormons, Seventh-Day Adventists, Bahá’íans, Buddhists, Hindus, Methodists, Wiccans, Zoroastrians, Mystics, and Mennonites? Why spend countless hours in unfamiliar situations, with people I didn’t know, experiencing traditions and rituals that I knew nothing about? Why share my pain and grief with strangers? What was the power of praying with others and for others in different divine spaces all over the world? What was I looking for? The answers to these questions came down to three deep needs for me: Healing, Connection, and Remembrance Healing: Finding the Path Through My Pain They say God never gives you more than you can handle. Well, 2009 apparently was my year to be tested. In April, my maternal grandmother died unexpectedly. In August, my father died of cancer-related complications after a long illness. As if this was not enough, when the year ended, the most significant romantic relationship of my life also ended. Saying goodbye to someone I loved a great deal in the middle of all this loss made everything worse. When the New Year began, I wondered how I could possibly heal from all my pain. Given that life was so challenging for me in 2009, you might imagine that I spent ample time in church, praying and leaning on God. I didn’t. I was raised Christian. Admittedly, however, my walk as an adult was not the most committed or inspiring. My church attendance was inconsistent. My prayers were more of the “Thank you, God” kind before I drifted off to sleep, or the “Please, God” kind, followed by whatever I was hoping would happen in my life. I wasn’t winning any awards for devotion or commitment. It was surprising to me that in such a challenging year, attending church was not more of a priority. I decided to do something that would encourage me to seek God everywhere so I could lean on Him as I navigated through my loss and disappointment. My spirit yearned to find out what the meaning of my life would be going forward. Connection: Recognizing the Kindness of Strangers I believe in the kindness of strangers. Throughout my journey, I soaked in it. During a tragedy, it’s often difficult to figure out what kind of support to ask for and how to accept it when it is offered. It was clear to me that my friends loved me, but when I was still struggling with missing my ex, or the loss of my father and grandmother, no part of me wanted to bother my friends or expected them to support me when I knew they were all doing the best they could to handle their own lives. There was something wonderfully comforting about walking into a new place of worship, knowing that people were there on that day to stand before God, however and whomever they perceived Him or Her to be, to help them endure whatever challenges they faced that day, week, month, or year. They contributed their energy to fight their own battles and encouraged me to fight mine. Oh, the love! In every single service, there was a time when visitors were welcomed, hugged, prayed for, and loved. The kindness of strangers sustained me, especially during times when my concern was that I was leaning on my friends too much or that my grieving process was taking too long. Remembrance: Honoring My Father, Dr. Ephraim Nseabasi Bassey, My Hero My father, Dr. Ephraim Nseabasi Bassey, passed away on August 24, 2009. He was my hero. He was a physician and a philosopher, a philanthropist and a proud family man. He was my father, and now he was gone. His funeral was on August 29, 2009. Writing a eulogy for my father was extremely difficult. In preparing to speak at his funeral, I thought about the things that made my father who he was. My remarks included the following: Certainly, he was a seeker of wisdom. He was a philosopher and a healer. His parents were pillars of the Catholic Church in their village in Nigeria, which is where he began his spiritual journey. Throughout his life, he worshipped within a Christian context, but along the way, he scoured the earth and studied all manners of faith, religion, and creed to find out the meaning of this life and his place in it. Many shared that they enjoyed having philosophical discussions with my father, and that they learned a great deal from him and how he viewed the world. Often, as we would close a phone conversation, he would remind me: “Don’t forget to pray … make time to meditate.” He once told me, “Ekpe, your life should be a prayer—all the choices you make should honor the Creator.” Those are words to live by, words that he lived by. His quest for truth and wisdom was never ending … up until his last day on this earth. Throughout my journey, I was able to live the meaning of my father’s name, Nseabasi, which means, "I am looking for God." I honored my father’s search for truth, as well as my own. Part of the joy and wonder of this journey were the many times a sign from my father appeared, letting me know that he was with me in spirit and in my heart, every step of the way.

Suffering the loss of her father and grandmother, and dealing with the ending of a relationship left the author tired, bereft, disappointed, emotionally drained, and feeling like God had forgotten her. She wondered what she could do to heal from this holy triumvirate of personal pain.

She decided that spirituality would be the context from which she would make her journey back to herself. If she felt like God had forgotten her, then she would look for him everywhere and in the eyes of everyone she met. She made a commitment to visit a different place of worship every week for a year, whether that place of worship reflected her religious tradition or not. In total, she visited sixty-one churches, temples, mosques, synagogues, and gathering places in the United States, Mexico, the United Kingdom, Nigeria and South Africa.

My 52 Weeks of Worship is the story of one woman’s courageous journey. Read and see—will her journey lead her to deep, dark places in her soul or help her find peace and acceptance?

EKPEDEME “PAMAY” M. BASSEY is an entrepreneur, world traveler, educator, writer, comedian, and philosopher. She was born in New York City to Nigerian-born parents, raised in Atlanta, and currently lives in Chicago. She has lived in North America, Europe, Asia, and Africa, and those experiences have shaped who she is. She has friends and family all over the world and has an innate love for learning about different people, different viewpoints, and different cultures.

She is president of The Pamay Group, an e-learning company, and Chief Experience Officer of the “52 Weeks of Worship Project.” The internationally recognized public speaker and facilitator is a graduate of Stanford University, Northwestern University, and the Second City Conservatory, an advanced study of improvisational comedy and theatre.