A MAP TO HEALING AND YOUR ESSENTIAL DIVINITY THROUGH THETA CONSCIOUSNESS 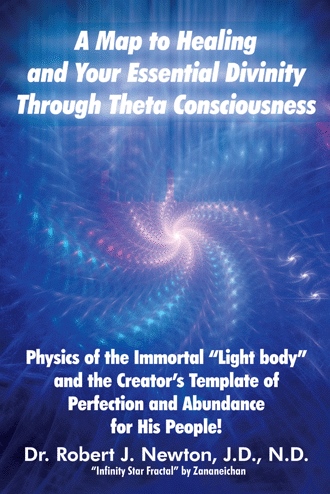 THIS BOOK IS ABOUT FUNDAMENTAL HEALING AND IMMORTALITY----not just the elimination of symptoms----and what this involves is a CHANGE IN THE FREQUENCY OF OUR CONSCIOUSNESS. Never, is the last 13000 years, has there been a critical need for a guidebook like this. The Earth and our Solar System and our Galaxy are at the precipice of a change into a more evolved cycle of consciousness. The ancient texts of India minutely dissect all of the cycle and sub-cycles that the Earth has transited through in the last 1.9 billion years of our civilization, so we know things are cyclical. CHANGE IS NOW OCCURRING AT LIGHT SPEED, as it were, in science (especially Physics), technology, in economic systems, in the treatment of disease, Metaphysics and human consciousness

These changes will be beneficial for us yet they bring a certain amount of stress with them which is compounded by Earth changes, including geomantic disturbances (earthquakes, etc.) and extremely intense and unrelenting weather patterns (intense storms and massive flooding).In the “sea of chaos” and pervasive changes with which we are confronted, is the inevitable fact that Earth will be undergoing a shift to a greatly intensified level and “field” of energy (Prana, Chi, life force) and the people who remain on Earth will be forced into an evolved level of consciousness. Those people who do not resonate with these higher energy fields, which are part of Theta consciousness, will no longer be able to remain incarnated here! THE CURRENT “OPERATING SYSTEMS “ FOR LIVING HERE WILL BE RENDERED NON-OPERATIONAL Thankfully, the author, with the help of incarnated and discarnate teachers, has discovered MAPS WHICH REVEAL THE HIGHER “THETA OPERATING SYSTEMS” that will “lead us out of the wilderness’ where we are now encamped, just as were the Jew’s in previous millennia.
The author has discovered that there is a preponderance of evidence that reveals the perfection of our Creator and the staggeringly varied and prolific creations that emanate there from, including us “human’s”. The author has gleaned and absorbed this information from his initial Metaphysical foray into ”Christian Science” or THE SCIENCE OF CHRISTIANITY. Additionally, and equally important, this information has come from Krishna in the “The BHAGAVAD GITA” from 5100 years ago, “THE EMERALD TABLETS” of Hermes Trismegistus from ancient Egypt and Greece, “The 72 NAMES OF GOD” from “ Exodus” from ”Biblical” times, “THE PATTERNS ON THE TRESTLEBOARD: The Truth About Self” by Paul Foster Case, “THE KEYS OF ENOCH” by Dr. J.J. Hurtak, “THIRUMANDURAM” by Satguru Thirumoolar, “THE YOGA SUTRAS” by Satguru Patanjali and “THE DEATH OF DEATH” by Satguru Babaji Nagaraj. This information goes back decades, centuries, millennia and even further. Generally, the essence of the message from these sources is that we are perfect beings of Spirit, Prana, Chi, electromagnetic energy and so is the entire Universe and other parallel Universes
Additionally, we have data from the various fields of Physics, including Quantum, Particle and Plasma, and Quantum Mechanics that are cross validating these concepts of Spirit/energy. While a great many Physicists would not agree with the above analysis of energy as the nature of creation, this is the essential property the ATOMS, from which EVERYTHING IS CREATED. This has been repeatedly proven in our atomic colliders including the largest one in Hadron, Switzerland where NO DENSE MATTER OF ANY SHAPE, SIZE and FORM HAS EVER BEEN DETECTED THEREIN! The real significance and sheer beauty of this is that WE DO NOT HAVE TO GROW OLD, DETERIORATE, BECOME DIABLED and DIE in our existing bodies! This text will how to entrain your consciousness in the frequency of “Theta”. Entering this state of “Theta Divinity” not only vastly enhances our psychic abilities, it gives us the maps/keys which take us to the level of the immortal “light body”, Cosmic or Divine Mind (consciousness) and a condition of perpetual abundance and prosperity….”where all of our needs are met….”! Consequently,  we can access a state of euphoria sans alcoholic and drug induced altered states and dimensions of consciousness Through the DEDICATED PRACTICE and MASTERY of “Kriya Kundalini Pranayam”,” Samadhi”, Sanskrit mantras, “Tai Chi Chuan” and the “Backflow Meditation”, which are explained in this book, we are given the pathways which allow us to access the elevated consciousness of Theta and the superhuman abilities that are elicited there from. BUT FOR THIS TO HAPPEN YOUR MIND MUST BE OPEN AND PLIABLE TO ACCEPTING, DIGESTING, ASSIMILATING and PRACTICING CONCEPTS WITH WHICH YOU MIGHT NOT BE FAMILIAR or comfortable with initially!The sum of this will prepare you for any predicament which you might encounter. EVEN MORE IMPORTANTLY, YOU WILL BE TRANSPORTED TO THE DOORSTEP OF HEAVEN!  Can a book actually do this? It can when an author has actually experienced and practiced this! 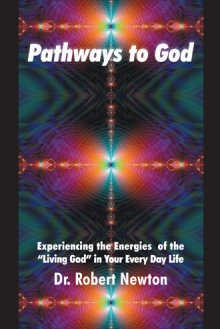 Finally, a FORMULA FOR HEALING, perfect health and the immortality of your existing body is, the result of DIVINE KNOWLEDGE, revealed in a unified and coherent format via ”Theta Consciousness Healing”™. Almost everything we have been taught from our parents, religions and governments is inherently incorrect and has caused us to be ignorant of our inherent, Divine perfection! This TEMPLATE OF PERFECTION extends through all levels of creation, from subatomic particles to ourselves and beyond and that enables us to experience perfect HEALTH, ABUNDANCE and UNLIMITED KNOWLEDGE! It will be demonstrated throughout this book that OUR ESSENCE is PURE, DIVINE ENERGY----God! This text reveals a system to reprogram our brain-computer /mind/consciousness to RECLAIM OUR DIVINE BIRTHRIGHT, and manifest the things we need and deserve in our lives. Ancient texts and modern physics are used to prove the validity of these concepts----not just mere human opinion.

Dr. Robert J. Newton was born on 10-31-46 in Pomona, California. He graduated from Cal State Fullerton in 1968 with a B.A. in Speech and English. His studies included General Semantics, Linguistics, Syllogistic Logic and English composition. Dr. Newton graduated from American College of Law with a Juris Doctorate, in 1975. He has operated an award winning landscape and design company for many decades. He was a “Certified Channel” of the “Tibetan Foundation” and has certifications in “Etheric Healing”, “Reiki”, “Sound Signature Healing”, “Magnetic Acupuncture”, “Theta Healing” and “Light Speed Learning”, among others and worked as a Christian Science healer for two decades. In 1991, Dr.Newton graduated from “Clayton School of Natural Healing” with a Doctorate in Naturopathic Medicine and completed his first book, “Pathways to God”. He is 3rd degree Asclepiad and has been initiated into the highest levels of Kriya Kundalini Yoga. Dr, Newton has healed many maladies including Cancer, AIDS and Crohn’s Disease. He has avidly pursued the study of Metaphysics and the Spiritual Sciences since the age of fifteen, including Christian Science, Religious Science, Science of Mind, Theosophy, Rosecrucianism, Buddhism, Hinduism, ancient Hermetic teachings from Egypt and Greece, Mayan Codicils, ”Quodoshka” (Native American) “The Keys of Enoch”, Tai Chi Chuan, “The Kabbalah” and Kriya Kundalini Yoga.