When The Golden Egg Cracks

Survive and Thrive During Economic and Natural Disasters 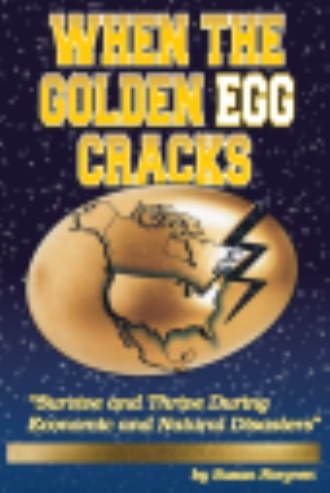 Chapter 1
Global governance is the treasonous foothold; and, like a pimple coming to a head, 2012 has experienced massive changes within the government, leading to the removal of constitutional rights. With the signing of the Patriot Act on October 26, 2001, and it’s reauthorization by Congress on May 26, 2011, government power over Americans increased.
The signing of the disaster preparedness EO on March 16, 2012 gives the office of the president complete control over all the resources in the United States. The president now controls and allocates food, transportation, energy, and water resources in the name of national security and national defense.
We have active Federal Emergency Management Agency (FEMA) camps, martial law, government farmland seizure, and mass disregard of First Amendment rights.
The Fourth Amendment of the Constitution states we have the right to privacy. The FBI has collaborated with issuers of state drivers’ licenses for photo comparison. Trials begin in mid-January of 2013, to accumulate and archive information on every man, woman, and child in America.
It seems a pattern of targeting right-wing extremists—normal, ordinary Americans who speak out against the government—is emerging. But what exactly does a person of this nature do? Is he a little too patriotic for the government’s taste because he speaks out about his political views about martial law, owning firearms, and survivalism? If the Founding Fathers were alive, they would be considered socially dangerous, right-wing extremists too.
Chapter 2
At one time America was the biggest manufacturing country in the world, with jobs to keep Americans working. We shipped thousands of our factories, millions of our jobs, and trillions of our dollars to other countries. So what do these countries do who have made billions from American ingenuity? They loan the United States money to pay the bills, and rush to buy American land. I am sure they think we are very stupid for allowing them to do this.
Food Inflation
 There will be more rain, colder winters, and drought. Food inflation will hit hard and grow worse in 2013 and 2014. The wheat supply continues to shrink. 
Chapter 3
In 2012 the earth will move through the “Disc of the Plane.” There will be bigger solar flares shooting from the sun. The energies from the flares bring natural disasters, such as volcanoes and earthquakes, triggered from geomagnetic storms and coronal mass ejections. Earth has never gone through these types of changes with humans on the planet. The new age will bring transitions and transformations of a new life.

Chapter 4
According to DreamMyst, the following represents an accurate timeline of earth changes, economic decline, and government actions. Any variation will be the difference between a period and a comma—one year or less—not ten years.
2012
An increase in solar flare activity will create more earthquakes, floods, volcanic eruptions, hurricanes, tornadoes, and tidal waves. Many will occur where they have not in the past. Glaciers melt faster.
Soft martial law is in effect.
Economy spirals downward. The year 2012 will be the beginning of major, challenging changes for most Americans and people worldwide.
Chapter 5
In the days and hours after the economic collapse, and later when more earth changes begin, there will be rioting and revolts. Stay calm, control your emotions, and keep a watchful eye for looters. If there is no police force, a thief will feel safe stealing from you.
Stockpile survival items now. Stored food is also fresh food that can be pickled, fermented, canned, smoked, dried, dehydrated. Have two years of supplies stored underground and inside your home, packaged survival food, grains, dried meats, and freeze-dried food.
Chapter 8
 People think the medicines pharmaceutical companies make are going to increase their lifespans. Taking these medicines creates more problems..
Vaccines are the vehicle through which infectious diseases are introduced to the population. All vaccines use toxic ingredients like neurotoxic aluminum, thimerosal, and polysorbate, and carry live viruses that cause the infectious diseases they claim to prevent. For example the MMR (measles, mumps, and rubella) vaccine causes measles.
Antibiotics
Did you know the United States is not developing new types of antibiotics? The old antibiotics are outdated and will be useless for the new superbugs.
There is a simple and inexpensive way to stockpile antibiotics. The antibiotics will treat 90 percent of the bacterial diseases and some forms of anthrax.
Most of these medicines have a long shelf life past the expiration date. With the exception, of amoxicillin and ampicillin, the medicines listed are suitable for people with penicillin allergies.
Oral Health Care
What will you do when someone you love has a toothache, broken denture, or cavity and there is not a dentist? Teeth will need to be pulled and the correct equipment will make a painful job easier for everyone concerned.
Chapter 9
 Your transformations and the journey of discovery, as you and future generations experience a shift of physical and spiritual consciousness that has not occurred in over ten thousand years.
The universe is infinite. It is not filled with emptiness or nothingness, but rather is absolutely filled with “somethingness.”
The phrase “As above, so below” means that all people from the inside out are a part of this somethingness.
Yes indeed, the amount of prayers, good thoughts, and vibrational healing you give helps to protect your world. These good-thought energies help those from the astral and other dimensions to assist in the healing of the planet.
To find peace and harmony, practice the arts of gratefulness, of adapting and thriving, and accepting those things you do not have control over. Harmony is agreeing to be a part of something. Wrap yourself in wisdom. Wrap yourself in knowledge. The light of this energy protects you, but it does not change what is to be. Create a circle of love by joining your hearts and minds with prayers and meditation.

The book you hold in your hand has the answer to any dilemma you might face under life-shattering changes that may be ahead for America and the Earth. DreamMyst, a Universal Light Being, shares with the world her absolute wisdom and insights about the future for Americans.

• Is the United States headed toward martial law and a revolution? • Will solar flares disrupt our electrical power for more than a year? • Will the dollar crash, causing gold and silver to skyrocket in value? • Where will you get food when the supermarkets are empty? • Would you go hungry? • In desperation, will you loot to save your family, or be the victim of looters?

Her honesty will open your mind to the certainty of what is really happening in the United States. DreamMyst unveils the alarming truth about:

How can you prepare for these potential events?

By using the knowledge in this book, your answer will be... ‘Yes, I am prepared.’ ‘I know what to do. I have comprehensive information and simple instructions. I know how to survive, and how to thrive. My family and I are ready to create a new life and new future.’

With co-author, Susan Norgren, DreamMyst provides practical, lifesaving information with real facts and resources. To prepare, thrive, and prosper in the years ahead, she reveals the Timeline of Future Events for America.

WHEN THE GOLDEN EGG CRACKS... is about creating history while enjoying the adventure.

“It all begins with you.” DreamMyst

As a Deep-Trance Channel, Susan speaks for Enlightened Beings. The Beings speak in their own voice, gestures, and mannerisms. As a psychic/medium, Susan’s spunky approach warms the crowd and touches the soul. She has been practicing metaphysical arts for more than 30 years and has the experience to understand and communicate on both the physical plane and in the higher realms. Susan is at home in the bus, Sedona Synergy, with her husband, Rob Norgren who is a Spiritual Healer. Their love of adventure drives them to sights unknown . . . or are they?