From the Teen Years Forward: A Rational, Safe, Worry-Free Approach to Lifetime Alcohol Use or Abstinence 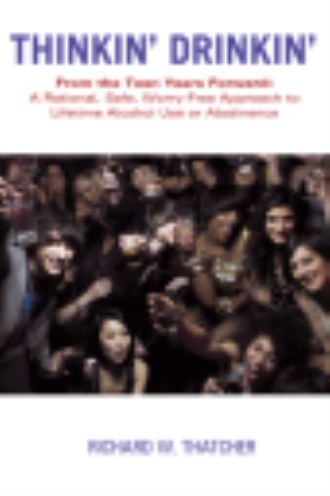 Teens and young adults in the United States and Canada are routinely exposed to direct and indirect forms of persuasion tempting them into participation in high risk drinking activity. That persuasion is conveyed by family, friends and acquaintances, as well as the multi-layered mass communications media that is so very much a part of everyday reality.
Accompanied by the exploratory, personal temptations that go along with youth, encouragement and even pressure to drink to the point of intoxication is often overwhelming. Such dangerous drinking practices include the most common, ‘drunken binge’ variety, as well as the pattern of current or emerging, addictive drinking. This book is intended to help teens and young adults wisely evaluate those messages and move from there to establish a firm and permanent commitment to sensible choices about alcohol use.
Having experienced troubles with binge drinking as a youth and young adult, the author, Richard Thatcher, later became a social worker, sociologist, counsellor and social policy analyst. His expertise within these fields includes the prevention and treatment of alcohol abuse and drug and lifestyle compulsions and addictions.  To inform the preparation of this book, the writer’s personal experience was combined with his knowledge of the scientific literature on substance abuse and effective counselling and self-help strategies.
While describing and, in part, even celebrating, the many benefits of beverage alcohol, the author draws the reader into a “no-holds-barred” confrontation with the typically unacceptable risks of intoxication and the drunken behaviour that stems from that impairment.  Embarrassment, shame, diminished and broken personal relationships, property damage, a wide range of health problems, conflict with the law, injuries and even death are all significant risks that alcohol abuse visit upon individuals and society—and they do so with far more costly impact on the entire population than any other, frequently abused, mood-modifying, recreational drug.
Dr. Thatcher believes that, amongst the variety of existing alcohol problems in our society, there is, in comparative terms, a disproportionate focus by policy makers and human service professionals on “alcoholism.” He argues that, when the overall costs are calculated, society pays much more for the ‘garden variety’ drunken binge than it does for the costs associated with alcohol dependency (alcoholism). Despite this fact, aside from the campaign against drunk driving, very little attention and a relatively small pot of public finances are allocated to preventing non-alcoholic, problem drinking.  Yet it is these very type of episodic, heavy drinking events that are virtually commonplace among secondary and post-secondary students, early school leavers, and young workers.
In Thinkin’ Drinkin,’ the author insists that the problem of alcoholism affects only a relatively small minority of American and Canadian young people. By comparison, the occasional drunken night and the binge drinking activity of non-alcoholics directly or indirectly has a negative impact on almost all teens and young adults.
Thatcher identifies the characteristics of those young people who should be teetotallers and articulates a set of strategies, mostly drawn from a scientific, evaluation research, to help them abstain from alcohol use. The greatest emphasis is reserved for convincing young people to become fully committed, sensible, thinkin’ drinkers’.
The author is convinced that, with the aid of the strategies presented in Thinkin’ Drinkin,’ virtually any teen or young adult can learn to avoid or sensible manage beverage alcohol consumption in an enjoyable, safe, worry-free fashion.
A brief summary of the key themes and contents of the book is presented below.
•    The introductory chapter provides an overview of the book, explaining that its contents are not a condemnation of drinking in general. Instead, it is an acknowledgement that, because of its associated risks, young people would be wise to develop a personal set of protocols to enjoy drinking while avoiding its dangers. It also suggests that drinking should not be treated as a forbidden fruit, as it is in North America (the United States and Canada), where it is considered a “naughty” activity, an agent of relief and, in varying degree, an expression of defiance, even rebellion for the young. Ultimately, it tends to be considered an opportunity – and excuse  -- for the exaggerated expression of emotions. By contrast, many other countries and even minority cultures in North America treat drinking as a more normalized aspect of life rather than being primarily a means of becoming intoxicated. Those other countries, in which adults share wine and beer with their children and teach them how to drink in moderation, tend to have far lower levels of alcoholism and problem drinking. This theme is given more detail later in the book.

•    The second chapter of the book describes the many problems with drinking the author had when he was in his youth. He argues that he was a seriously troubled binge drinker but that he could find little help for the problem. The only interventions available at the time required that one personally accept and identify with the “alcoholic” label and get treatment and join Alcoholics Anonymous (AA)—and he rejected both on rational grounds. In many parts of the United States and Canada, the same advice and accessible interventions prevail today. In response to this deficit of alternatives, Thinkin’ Drinkin’ provides an inventory of self-help methods to help young people self-assess their problems, decide if and when they should turn to professional help and, for most, establish, primarily on their own, firm, sensible and safe principles to guide their drinking activities or practice a self-determined, abstinent lifestyle.

•    The book presents some historical material on beverage alcohol and talks about its many functions and the significant health benefits that it yields. While giving kudos to alcohol-based libations, the author does caution that there are usually safer and more healthy substitutes that can at least match virtually all the psychological, social and health benefits of beverage alcohol. The key theme reiterated throughout the book is that only drinking in moderation is healthy, however, while drinking to the point of intoxication is a high risk activity.

•    The book describes different kinds of drinking problems and drinkers, arguing that not only potential alcohol addicts but also individuals with troubled motivations for drinking and predictably bizarre drinking patterns should completely avoid drinking. Specific strategies and exercises are provided to assist the individual in developing what the author refers to as a thinkin’-not’drinkin’ strategy for those who simply shouldn’t drink...

While describing and even celebrating some of the many benefits of drinking wine, beer and spirits (hard liquor) in moderation, Richard Thatcher’s Thinkin’ Drinkin’ also shares an abundance of ideas and scientific evidence that, when taken together, add up to a cautionary tale about careless drinking. The book is informed by Thatcher’s own troubled, early, and long-sustained experience with alcohol and his subsequent success at getting the problem under control. In addition, he brings a wealth of professional expertise to his writing task.

Dr. Thatcher draws upon various aspects of that accumulated knowledge to inform and provide guidance to help teens and young adults establish enjoyable, safe, worry-free approaches to drinking. These approaches can be readily adapted to any healthy lifestyle and can become good habits that last a lifetime. The author firmly believes that, if widely adopted, those “good habits” will save an enormous amount of heartache, emotional and physical injury, and many thousands of lives.

Richard Thatcher, BA, MA, and PhD, is a sociologist, social worker, and social planning consultant. He has worked for several decades in the fields of mental health and social services and community health planning. As a counsellor he has focused a good deal of his attention on substance abuse and behavioural dependencies.

Dr. Thatcher is the author of Vision Seekers: A Structured Personal and Social Development Program for First Nations’ Youth at High Social Risk (2001); Deadly Duo: Tobacco and Convenience Foods—The Other Substance Abuse Epidemics Afflicting the First Nations and Inuit of Canada (2001); and Fighting Firewater Fictions: Beyond the Disease Model of Addictions in First Nations (2004).

A licensed professional social worker in private practice and a certified clinical sociologist, he is now semi-retired and lives with his wife in a converted school house in the rural village of Craven in the Canadian province of Saskatchewan.