Bluey and The Great Spirit Moon 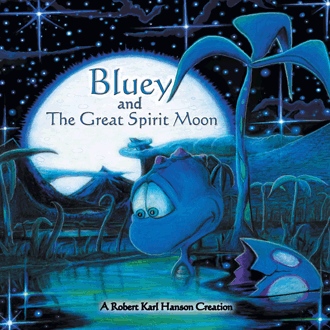 Bluey and The Great Spirit Moon is a Children’s Picture Book for the whole family with a poignant message for the new millennium. It is an out of this world adventure that is both entertaining and educational. Bluey faces many of the challenges facing us today on his planet and with courage and conviction he peacefully overcomes them. It has a moral message and an uplifting happy ending. If you want to leave our world far behind, if you want to return to a magical place of innocence we all knew ‘once upon a time’ then Bluey and The Great Spirit Moon is the book for you, and for your kids.

Planet Eternius had once flourished in the life giving light of the Great Spirit Moon. The exotic creatures lived off the land, eating grass, fruit and pods, existing in tribes, living in harmony. But then Mt Vulton erupted, plunging half the world into darkness beneath its ash cloud. Soon after, the tribes of Eternius started to mysteriously vanish. As they did, the love reflecting light of the Great Spirit Moon began to fade. But don’t lose hope. Bluey, an orphaned Rinothorus has been sent to save their troubled world.

Raised by Shee, a barren Hipotot, Toddy, a humble Horntoad and Samuel, a clumsy Swampsnake, his childhood is filled with love and laughter. But a bad dream of his Rinothorus mother convinces him to embark on a journey to find her and save her.

Reaching the peak of Mt KoKo, staring into Bluey’s homeland, they’re shocked by what they see. Rinothorus Valley has been devastated. The Rinothoruses’ and the nomadic tribes that had once roamed there are gone. Shee and Bluey will continue searching for his mother but now they’ll also begin searching for the Lost Tribes of Eternius. Toddy and Samuel will stay behind to repair the valley.

In the Barren Desert Shee collapses and can go no farther, so Bluey must go it alone. But her example of unconditional love will inspire him to never give up on his quest.

Entering the dark lands of Trogonia Bluey is attacked by a flock of Bogons. Lucky he’s rescued by a twelve- legged Funkmonkey slave named Styx, who promises to take care of the extremely rare Rinothorus. Styx tells Bluey when the Trogotons ran out of grass they imprisoned all the creatures and they’ve been eating them. But now they’re running out! Styx wants to wage war to liberate his enslaved race but Bluey has a noble idea that could save everyone, including the Trogotons. Migrate to the northern horizon, eat grass again, set the creatures free and all will be forgiven.

But even if they could make it into the heavily guarded Royal Cave, could either of them really convince Emperor Monstronto, the tyrannical leader of the Trogotons, to do what they want? And can Bluey really trust Styx? He is a cunning genius bent on revenge with only one thing on his mind, war!

Against all odds, Bluey is able to inspire peaceful revolution, saving the Lost Tribes, the Funkmonkey slaves and even the Trogotons from the oppressive rule of Emperor Monstronto. When Bluey is reunited with his family and when the Lost Tribes return to the moonlit lands the love reflecting light of the Great Spirit Moon begins to grow and planet Eternius returns to what it once was, a peaceful paradise.

Remember, no matter how small you are that one can make a difference. Nothing is impossible if you believe in love. Never give up on your dreams! If Bluey could save his fragile world from destructive beasts, then maybe it is possible for us to save ours. 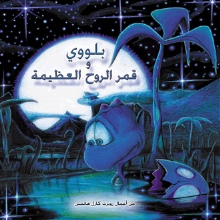 This colorful hand drawn Children’s Storybook is entertaining, educational and inspirational and recommended for the whole family.

Bluey and The Great Spirit Moon is an ‘out of this world adventure’ with engaging characters, breathtaking landscapes and a poignant story for the new millennium.

It teaches love, tolerance and forgiveness.

Bluey, an orphaned Rinothorus is on a quest to find his missing mother and lost tribe. But the light of the Great Spirit Moon is dying so time is running out. With help from his adoptive family he will set out on a wild adventure across planet Eternius guided by vivid visions. He’ll discover millions of innocent creatures are being held captive inside Mt Vulton by terrifying Trogotons. It is a David Vs Goliath mission but with help from a cunning Funkmonkey slave named Styx, Bluey will save his fragile planet in a way no one else could have imagined.

Please visit the website www.blueyandfriends.com for the music, merchandise and much more!

Robert Karl Hanson is an artist, musician and author living in Tasmania, Australia. He has dedicated most of his adult life to the concept of ‘not growing up’ so he can pursue his childhood dream.