The Testosterone Principles 2: Manhood and Other Stuff

by TC Luoma & Cover design or artwork by Leah Devora 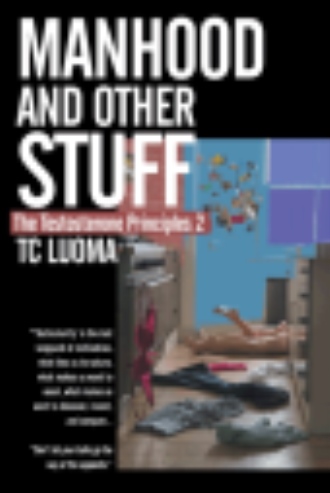 You should know up front that his book might cause you to reevaluate your life. It might influence you to quit your job and switch careers. You might start to look at your relationships in a different way. Hell, it might even cause you to realize that you’re not in a good marriage.

That’s not just hyperbole, either. T. C. Luoma’s popular weekly column—the best of which are featured here in The Testosterone Principles 2: Manhood and Other Stuff—has elicited exactly such potentially life-changing thoughts from the people who regularly read his work.

He doesn’t preach or rap you on the knuckles. Instead, he shows you glimpses of what life—your life—could and maybe should look like. If you’ve got even a speck of self-awareness, you end up asking yourself, “Hey, is he talking about me?”

His observations, liberally backed up with science and spiced up with quirky references to popular culture, serve as a guide to the weird, conflicted, often horribly flawed creature called man.

T. C. Luoma was born to Finnish immigrants in Windsor, Ontario, but spent the bulk of his youth and adolescence in nearby Detroit, Michigan. He attended Eastern Michigan University where he earned degrees in microbiology and English language and literature. After college, TC had a host of jobs, including stints as an assembly line worker, an armored car guard, a phlebotomist, a used car salesman, a male model, a freshman English teacher, a short order cook, a technical writer, and many other jobs too numerous to list.

Currently, T. C. is the editor-in-chief of Testosterone (T-Nation.com), an Internet magazine devoted to weight training, sports supplementation, and, in general, changing your physique.

T. C. currently lives in La Jolla, California, with his heroically tolerant wife, Laurie, and his Staffordshire Bull Terriers, Tommey and Riley. His wife, when describing him, likes to quote Tuco from The Good, the Bad, and the Ugly: "He's tall, blonde, smokes a cigar, and he's a peeg."