Whispers of a Heart From the Other Side 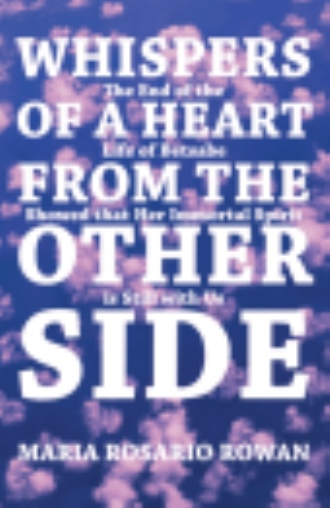 Hearts to Everybody On Friday, January 7, 2011, Betsa’s mother, her daughter Carolina and two cousins were talking in the room of Alejandrito. Suddenly, Yosmar, one of the cousins said, “Look at the wall -- There's a heart, and here’s another ... and another!” They counted up a total of eleven hearts. Eleven was the age when Alejandrito had left the Earth. November is the eleventh month, and also it is the month Betsa was born and left this life. All hearts are one beside another, marked clearly on the wall. For 16 years this room had remained the same, intact, and unchanged. The clothes, toys and furniture of Alejandrito were there positioned exactly as on the last days he wore them. Betsa had always wanted to change Alejandrito’s room, to fix it up, but her mom never let her. When Betsa left, her sister Carolina insisted that the family should finally fix Alejandrito’s room. After a lot of hesitation, María Teresa accepted. They donated Alejandrito’s clothes and toys. They moved the furniture. The room had been thoroughly cleaned and refurnished a week earlier by Carolina, her parents and a few cousins. They knew that the hearts were not in that wall, before or ever before.

Whispers of a Heart from the Other Side is an amazing story about a girl named Betsabe, who made contact with her closest family and friends after she left her earthly life unexpectedly.

Author Maria Rosario Rowan has since been visited by her departed niece and an accompanying spirit of light, daily, for several months, to share beautiful messages that reveal truth about life here on earth, and in the hereafter.

Maria Rosario Rowan is a Venezuelan writer and mother. She was a successful business professional who is now totally devoted to spiritualism. She writes about communicating with the spirits of those who have passed. She has studied meditation, the art of feng shui, past-life regression, Reiki, and more.