Ask Spirit; Feel the Emotions; Use the Intellect; Then Act. 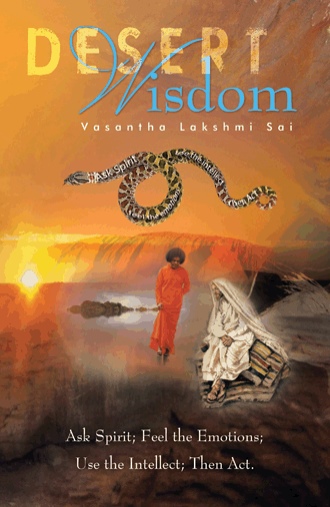 ‘Sai Baba has come to sit in for your reading,’ said Olgaa , ‘and He wants me to offer you a glass of water.’

My eyes flew open and I gasped out aloud, for at that exact moment I was overcome by a thirst so great that it felt like I had been walking for miles across an arid desert and had just fallen onto my knees exhausted and dehydrated and very close to death.

My husband and I had gone to Olgaa Fienco for an Angel channelling session. Richard, a programmer, was between job contracts and was seeking a new position. He called a former work colleague to confirm his position as a referee and during their brief telephone conversation, Olgaa’s name came up and by the end of that short conversation he had booked an appointment for us to see her. Olgaa , the partner of Richard’s work colleague, channelled angels and did intuitive readings.. I had not met Olgaa nor her partner before but I went along with my husband on a trickle of curiosity. For Richard to have booked a session of this type was very out of character.

A few days later, I took a deep breath and stepped through Olgaa’s front door. After the initial introductions, greetings and the offering of refreshments Olgaa ushered us into her lounge where she did her work. The first thing that met my eyes was a photograph of Sai Baba on her mantelpiece. Next to Baba were images of Jesus and other angels. I knew then somewhere deep within that I was meant to be there. I had prayed to Sai Baba for years and my most fervent prayer to Him was to make the marriage between my husband and me a happy one. I prayed desperately for better communication between us and I prayed to be a good mother to my two sons and a caring daughter. But, somehow it felt that the more I prayed for a happy marriage and secure family the more I was challenged. To say that the relationship between my partner and I was strained would be a euphemism. Furthermore, most of the conversations with my mother, who lived with me, ended up in fits of fury and rants and rages. I felt like a ship lost at sea with its hull being bashed against a powerful iceberg which would not budge.

After I had the drink of water, we settled into the session once again. This time Olgaa was a channel for Sai Baba and Baba had many messages for me.

The first one being, “Read those books.”

For the past few months, it had come to me that I must study, but I had no intention of getting another degree. So, was Baba telling me to further my studies because I was resisting it?

“What books are these?” I asked.

Baba then showed her three books and told her that I had them already .He even showed Olgaa where they were in the house! Olgaa described them to me and this was how I was led to ‘A Course in Miracles’, a book on ‘Positive Thoughts’ and a book on Sai teachings.

I asked Baba for some guidance for my husband and me and according to Olgaa, He held a yellow birthday cake in His hand, smiled mischievously, then left.

I began my nightly reading of passages from ‘The Course of Miracles’. Now, anyone who has read and studied this book will understand that this is no bedtime reading! I had many impolite conversations with Baba as to why He, an Indian Guru, would see fit to direct me, a Hindu girl to a ‘ Christian’ book most of which seemed to be too difficult for me to understand anyway.

My lifestyle was similar to that of many working mothers .It revolved around the children, house and family. Work fitted in there somewhere. Early rise, quick breakfast, getting kids out of bed and the shower. The voice volumes rising threateningly with each yell. Preparation of school lunches, dropping kids at school, dashing off to work, returning home to cook dinner, the laundry, school notices, and the list goes on. When I eventually fell exhausted on my bed late at night, I would drag out my copy of ‘the Course in Miracles’ and read a few pages at a time.

Most of the time, I was so sad and lonely. My marriage had reached a point where I had no idea what to do anymore. I had gone for counselling alone. I tried correcting patterns in my behaviour that I had identified as being self-defeating. I prayed and cried and prayed some more. All the while I could hear my mother’s words ringing in my ears. “ A Hindu bride must be the rock in her marriage…’ I read and re-read books on love languages and relationship rescues. I tried practising the suggested techniques. Nothing worked. I was in a relationship that had gone awry. A relationship laced with pain, confusion and emptiness. I had lost touch with my own personal power, my own dignity, my standards and my self-esteem. I had lost touch with my core consciousness. I could no longer find nor hear this God- given core in me. I had rationalised away many hopes and dreams and was trying to settle for so many things I did not want.

The 10th Nov 2008, about six months into my study of ‘The Course in Miracles’, was my 24th wedding anniversary. It is strange phenomena that on significant days like Christmas, Diwali, birthdays and anniversaries it is very difficult to be in denial. The truth of your situation threatens to surface and drown you with despair. I, however, had consciously decided that I will get through this day by not acknowledging it. My husband had not been talking to me for a few months and I who had experienced this silent treatment repeatedly for many years rationalised that this will pass and all I had to do was breathe deeply and ‘be the rock’. For many years I would silently sing the words of the song ‘ Smile’- ‘Smile when your heart is breaking, Smile when your world is shaking, Smile whenever you’re feeling blue…’, whenever I needed to get through a difficult time. However, my best laid plans were not to be that year. My sister, who knew of the difficulties in my marriage, decided to surprise me with an anniversary cake. To say that I was furious would hardly begin to describe the rage and explosion that erupted from the very depths of my being.

I went to bed visibly shaking. I was so angry and guilty at the same time. I was also so ashamed at my behaviour. I allowed my children to see me totally out of control. I was in such anguish. My sister insisted that her intentions were good and she only wanted us to remember the good times. So why was it that her acts of goodness felt so wrong for me?

I awoke the next morning with a clear strong, clear, urgent message to go to the Sai Baba ashram in Puttapathi, immediately. I turned to my husband and told him but he did not even acknowledge hearing me. When he was in silent mode, nothing penetrated his armour. The rest of the family thought I was referring to the Sai centre close to home in Melbourne. I should mention here that though I spoke to Baba often in my head, I did not go for weekly bhajans nor was I seen as a Sai devotee. My stating that I wanted to go to the ashram was unexpected and was met with bemusement by all.

Desert Wisdom brings us back to the realization that we are not separate from God or from one another. We are at a new frontier where it is time to weave East with West and spirit with matter. Author Vasantha Lakshmi Sai does not ask that you believe blindly in a God; instead, she asks that you believe in yourself and that you realize the truth of who you really are—a soul with a body, not a body with a soul.

Desert Wisdom: Ask Spirit, Feel the Emotions, Use the Intellect, Then Act is an autobiographical account of Vasantha’s spiritual odyssey with Sai Baba, the universal teacher. Bhagawan Sri Sathya Sai Baba has made his advent into this world with a view to raising humanity as a whole to a higher consciousness, based on the living faith that all human beings are inherently divine. He does not seek followers, nor does he wish for people to change their religious faiths. He asks only that we open ourselves to the truth of who we really are.

Now Vasantha Lakshmi Sai shares her journey, her learning and a few simple but effective techniques to help you listen to your own inner guru, your soul—the God within.

Vasantha Lakshmi Sai was born in Durban, South Africa and currently teaches both English and Literature in Melbourne, Victoria. This account of the profound and deep transformation she underwent as a result of a series of communions with Sri Sathya Sai Baba, is her first book. Sai Baba took her under his tutelage and lovingly guided her back to a state of love, peace, joy and courage.