A Portal to Satori 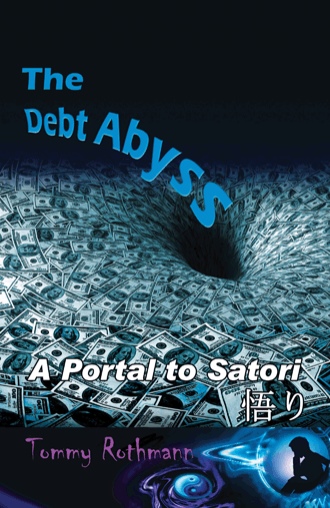 How did I get myself in to this mess? How am I ever going to get out of it? It’s just too much to deal with; so many people depend on me.
Life preserving sustenance oozes from my soul and evaporates around me. I’m too weak to take the next breath.
So much of your energy and thought is anxiously engaged to counter the powerful pull from within the debt abyss. Once in its grip it has the potential to devour anything and anyone in its path, like the relentless flow of lava down the once green slopes of a mountain.
Only the effect of opposing natural forces such as cool air and water can slow down its momentum and eventually stop its flow all together, but not before it has done almost irreparable damage.
This work is such a natural force.
I sensed a guiding awe within the creative realms of this work, in pondering how humanity can ever brake free from the pull within the debt abyss. A precise group of souls across the expanse’s reaching has become wearisome, their feeling devoid of a sense of being, disconnected, overburdened with the prospect of living with themselves for another day.
The sobering truths in this book, will arm you with a different perceptive of why you are within the abyss and the hope that you have options.
Together we deflate the burden by exploring reasons for and effects of indebtedness. We unpack the more common excuses used to remain within its grasp. By asking what now, solutions and tools are offered to improve your mental fiber and rise above its pull once and for all.

Tommy Rothmann’s purpose in life is to lift the hearts of the weary and merely-subsisting suburban soul.
He wishes to serve, provide encouragement to anyone hanging on for dear life to not give up. Even if your world is not that shadowy, you might suffer more mundane challenges. Tommy’s wish is to sit at the feet of the masters with you, in search of an inspired destiny.
His greatest credential is his experience as a husband and father of four children. He is neither from impoverished beginnings nor a privileged station in life. He is a typical, suburban citizen, yet there is nothing ordinary about his work. He provides a balanced look at issues affecting suburbia, in a way that improves awareness, understanding, and the power to act.

He is an educated and seasoned corporate finance professional, who has counseled extensively in his community, over many years. Tommy is a keen student of behavioral sciences and has a deep desire to reach out, to be connected and to help.

He has traveled extensively across the world, experienced many cultures—making him acutely aware of the exciting nuances within the kaleidoscope of societies, threading the inspiring tapestry of humanity together.

He wishes to continue his infinite quest for learning, enhancing himself in the process of lifting others.

Please join him on his extraordinary journey through the streets of suburbia.