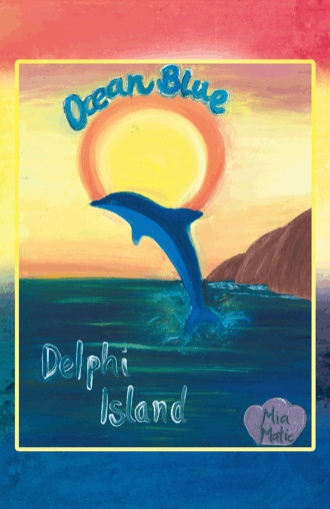 What a magnificent sight Delphi Island is! thought Bubbles as he swam towards his beloved home and sighed. It was nearing nightfall and the sun had just set behind the Island, the orange afterglow still visible in the sky and illuminating the Island, making the Island appear mystical. The island, his beloved home was in trouble and he wasn’t sure who to ask for help, let alone how to help. Another day will go by, he thought bitterly and yet still no solution to the problem that threatened the existence of his home. Once the island stood in all its glory, magical even, a beautiful clean and undisturbed island that vibrated clear energy, and now it looked unclean with all the rubbish piling up on the rocks that surround the island, making it look very dirty, uninviting and killing all that came its way, discriminating against none.

Bubbles remembered when the island was buzzing with visitors they were all friends: seals, otters, whales, turtles, sea lions, dugongs and even sharks just to name a few. Now these friends didn’t stop at Delphi Island anymore for fear of getting sick or worse, from the unnatural items that turned up from the main land. Allymera Bay was just across the water from Delphi Island and the bay inhabitants had pretty much left the island on its own, however the items that were thrown into the ocean by the people somehow ended up on Delphi Island and were causing sickness and even death to some unsuspecting and curious sea creatures.

Bubbles arrived just in time for the gathering where the Elders had assembled to discuss the challenge of clearing the rubbish. Bubbles noticed that all who loved and cherished Delphi Island were present and there were quite a number of participants here. His heart swelled with pride at his community. “We have called a meeting to agree on what action we shall take to protect our island from destruction” one of the Elders began. “The so called ‘rubbish’ that has polluted the ocean has somehow ended up here and we need to find a way to dispose of it and stop it coming, with no harm to anyone here. Does anyone have any ideas or suggestions this evening?”

Bubbles watched on as a number of participants suggested a few plausible solutions, however all were deemed unsuitable for the magnitude of the problem. Bubbles sighed and wished he had a suggestion. The meeting went on for awhile, but Bubbles was only half listening as he was lost in thought, there must be a way to save our island, there must be a way! But how? Bubbles was still thinking about a solution when the meeting came to a close with no definite action in place. Bubbles, feeling dejected, went home thinking, I must find a way!

Bubbles arose from his rest excitedly, as he had a brilliant idea how to save their island. However, he needed to get the appropriate people involved before he could bring his idea to the Elders. He was certain that presenting the idea with no back-up would prevent the Elders from accepting the proposal. Bubbles knew deep down that the idea would work but he needed to get things into place first before tonight’s meeting.

Why he didn’t think of it before baffled him but it still felt like a sound and formidable plan to him. However he wanted to be sure, so he asked his best friend, Silva to go for a swim with him as they would be out of ear shot before he told her of his plan. Silva was always up for a swim and sensed the excitement within him, so without any fuss they headed out to the deserted nearby reef. After a preliminary but thorough check around, they were both content that no one was close by hiding or listening. “Alright Mr Excitement,” said Silva cheekily, “What’s going on? What plan have you hatched now?” Bubbles laughed in delight and wondered how his friend knew him so well, only the twinkle in his eye gave him away but that was enough for Silva to realise he was up to something! Dear wonderful Silva! What would he ever do without her?

“Well” Bubbles said hesitantly “I am not sure if this will work but.......” he looked straight at Silva, took a deep breath and told her of his plan quickly before he changed his mind. When he was done, Silva looked at him half in bewilderment half in amazement and said “Well if you can pull that off, it may actually save our island. It sounds like a great plan Bubbles!” Bubbles looked at his friend and said, “yes but you don’t sound convinced Silva” He knew his friend too well to know that she was not as convinced about the plan as he was and he wanted to know what Silva would object to. “Well....” Silva said slowly, she really wanted to support Bubbles in this ‘out there’ but plausible plan of his but there was one hurdle that seemed like a show stopper already.

“Do you know any person that could or would help?” She hoped she sounded a lot more optimistic than she felt but she knew better than to drag Bubbles down, as once he had a plan in his mind, nothing could or would deter him from carrying it out. She should know, she once tried to stop him before but was unsuccessful and so she learnt to be supportive and as adventurous as he was. “Not right now no, but that is half the fun and actually that is where you come in as you intuitively know people’s characters and natures within the first few minutes of meeting them” Bubbles said with a twinkle in his eye, the one that Silva knew would mean there was no point arguing with him!

If anyone had seen the two young dolphins together, they would have thought that they were two dolphins enjoying the moment, talking, bantering, playing and having fun together. In reality the two best friends were hatching a plan that, if carried out properly, would save their island, their beloved home!

William Taylor lives with his parents in Allymera Bay, famous for its spectacular sunsets and beautiful beaches. He’s enjoying his summer because he gets to spend plenty of time out on the water, swimming and surfing. He knows these waters like the back of his hand—or so he thinks.

One day, he befriends two very interesting sea creatures named Silva and Bubbles—and they need his help. Suddenly, William’s usually quiet world is turned upside down by his new friends. During this strange and beautiful encounter, William makes a promise to help them save Delphi Island, their home. And in the adventure they share, an unusual friendship is born.

It’s going to take all of their courage and faith in each other to see the adventure through. They’re learning that the quest is much harder than any of them initially thought, but together, they know they’re all better and stronger and braver.

Given the enormous task at hand, can William keep his promise and help his friends save Delphi Island, their beloved home? Theirs is a magical story about friendship—and believing that anything is possible.

Mia Matic, a primary school teacher, believes that “you are only limited by your imagination.” Her love of books started at an early age. As a child, Mia read as much as she could and was mesmerised by the magical places described in the books. Now, her love of teaching and books merges in her new novel, Ocean Blue.