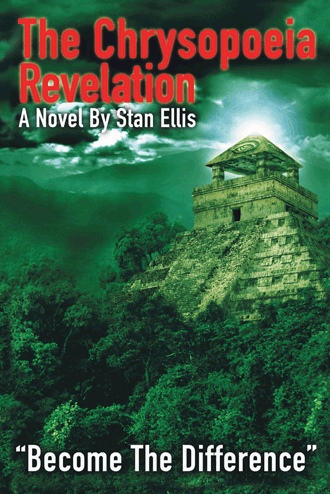 At the bottom of the damp cliff face that was once a waterfall, Ben stated the order of the climb would be himself, Reena, Senona, Baila, Amoldo, Chief Noko, and Horado.

Two hours later appearing sweaty and exhausted, the expedition stood triumphant at the top of the waterfall. Behind them, the panorama of the Darien Rainforest looked like a glistening emerald in the Panamanian sun. The members of the expedition appeared miniscule in the magnificent canyon as rays of filtered light barely penetrated the jungle canopy high above.
Reena remarked, “This is more beautiful than any fiord I’ve ever seen.”
No one commented as each admired the towering canyon walls streaked with surrealistic rays of light. Noticing Amoldo’s shortness of breath and Noko’s physical exhaustion, Ben instructed everyone to rest for fifteen minutes.
Before they began to climb the damp riverbeds forty-degree incline, Amoldo excitedly remarked, “This is exactly what I envisioned. We’re here Noko.”
The chief put his arm around Amoldo as they gazed up at the canyon walls with distant looks of content resolve.
Senona looked at Baila and remarked, “I wish Soledad could be here to take her pictures.”
Baila responded, “She’d love this.”
Reena held Ben’s hand and responded to the two women, “I believe she is here.”
Horado studied the leaning formation of the canyon walls and how they almost joined at the top of the mountain as he remarked, “The canopy at the top has kept the canyon from being seen by aircraft. This place is a giant crack in the earth from a volcanic earthquake.”
Still gazing upward Amoldo interjected, “It’s a crack in time for Noko and me.”
They began the climb up the steep incline of the winding dry riverbed, briefly stopping to collect small gold nuggets on the way. Rounding the last bend, the cliff, and the entrance to the cave became visible.
As they approached the cave, Horado remarked, “It looks like the stinking sulfur water is trickling from an opening below the main cave’s entrance.”
Ben was the first to notice fossilized animal bones around the pool of sulfur water below the cave entrance.
When they stopped at the entrance to the cave, Horado explained, “The burn marks, sulfur water, animals killed by acidic fumes, and the earthquake that created this canyon all explain Amoldo’s vision of a fire serpent with an oozing stench, breathing fire, roaring eruptions, and killing animals with its poisonous acidic breath.”
Amoldo agreed with the geological phenomena explained by Horado. Ben suggested, “Only a few of us should make the initial exploration.”
Everyone expressed his or her agreement with nods.
Horado quickly volunteered to lead, stating, “Ben and Amoldo can follow me, while the rest of you remain here.”
Reena interjected, “I’m going too.”
Ben resumed leadership, stating, “I’ll lead followed by Horado, Reena, and Amoldo.”
Senona and Baila looked mildly disappointed and Chief Noko looked relieved.
Senona told Baila, “Let’s give them our flashlights.”
They fumbled through their backpacks and handed the flashlights to Ben and Amoldo. Horado kept his flashlight in reserve for an emergency.

Ben leaned over to step into the cave’s entrance followed by the others. Ben and Amoldo shined their lights around a large chamber mushrooming out from the five-foot wide floor of the cave. Ben spotted a shaft exiting the chamber and motioned for everyone to follow.
Reena remarked, “That stench is worse in here.”
Amoldo shined his light down at the floor and noticed a large crack running the length of the floor. They all watched as Amoldo knelt to shine his light through the crack.
Amoldo peered into the crack and laughed as he exclaimed, “Golden bubbles.”
Ben knelt and shined his light into the crack as Reena and Horado knelt to observe water trickling over large glimmering gold nuggets in the small cave below them.
Amoldo announced, “The stream with the golden bubbles I envisioned crossing in darkness. This is it.”
They observed for a few minutes without trying to retrieve any of the nuggets. There expressions silently exuded a whetted anticipation of finding the ancient stone relic at last.
Finally, Ben shined his light into the continuing shaft. The shaft appeared to be large enough for each to walk single file up a forty-degree incline. As they stood to resume the exploration, Horado asked for a flashlight. Ben handed him his, and Horado studied the spider web of cracks in the cave walls for a few minutes.
As he handed the flashlight back to Ben, Horado commented, “Another seismic event could collapse this cave.”
Everyone glared at him, and Horado sheepishly shrugged as Reena remarked, “Too much information Horado.”
Ben turned and led the way as the group resumed its exploration. They exited the chamber single file into the shaft as they climbed over boulders while ducking under overhead rock protrusions.

Senona and Baila slipped off their backpacks and retrieved canteens of water. Senona offered hers to Chief Noko, who graciously accepted it, took a brief drink, and returned it.
Looking a little guilty, Baila announced to the chief, “We weren’t always FARC. At one time Senona was a school teacher, and I was a school nurse.”
The chief nodded pleasantly and asked, “What’s a school?”
Senona explained, “A school is a place where children came to learn from me.”
Baila interjected, “I treated any children who became sick, and I taught basic healthcare.”
The chief nodded again and opened his arms, indicating the expanse of nature that surrounded them as he replied, “Like this school.”
Senona smiled at Noko and replied, “Ours was much smaller, like a hut.”
Senona’s look became serious as she asked, “Why didn’t your warriors use poison darts when they ambushed us?”
The chief replied, “We’re not really warriors like FARC. We only wanted to scare you away from hurting our friend Amoldo and his friends. Were either of you hurt by my men?”
Both women nodded negatively and Noko remarked, “Good, I told them we never hurt women.”
Feeling guilt-ridden, Baila told the chief about Col. Agusto’s ambush of the eight Chocos. The chief grimaced with sorrow and thanked her for telling him. The women silently let Chief Noko grieve the loss of his men. Baila couldn’t contain her guilt any longer and burst into tears as she exclaimed, “I killed one of your men in the ambush. I’m so sorry Chief Noko.”
The chief briefly looked at her with anger on his face that turned to resolve as he offered, “That’s a terrible thing that only you must live with. You did kill one of your own to save my friend Amoldo and his friends.”
Feeling sorry for both of them, Senona asked the chief, “Can Baila and I be forgiven by your people? We’ll do anything you want.”
The chief paused and suggested that Baila offer to help the dead Choco’s family as a way of showing remorse for taking his life. Once again, they became silent.
Baila broke the silence, saying, “I’ll offer to be their slave by doing all the work he once did for his family.”
The chief was noticeably impressed and told her that slavery wasn’t a Choco practice, but the services of a medicine woman for the village would show her respect and remorse.
Senona exuded a moment of enlightenment before remarking, “We’ll use the gold we’ve found to buy medicine for your people, and I’ll teach the people in Columbia to respect the rights of the Choco people if you’ll accept our friendship.”

As escalating aggression and chaotic global changes converge, threatening to crush our dreams and collapse the foundation of reality is a perceptual shift or evolution of consciousness emerging to unveil knowledge of the absolute truth of humanity’s destiny.
Stemming from authentic science, The Chrysopoeia Revelation unfolds an answer that includes how humanity will evolve higher consciousness and mortal being.
At the site of an anomalous Mayan Pyramid in Panama, Ben, a professor researching the field of consciousness, joins an expedition in quest for an ancient relic that reveals how to accelerate the evolution of higher consciousness. The dangers Ben faces, dimensional experiences, a romantic past-life back-story, and the choices he makes raises his super-conscious abilities.
Pursued by guerilla mercenaries working for the Illuminati’s New World Order, the expedition—which includes a Mayan Shaman and yet-to-be-realized soul mates—discovers the secret to evolving humanity in accord with the Mayan 2012 prophesy of a new age of peace, prosperity, and spirituality.
Praise for The Chrysopoeia Revelation:
There is some great stuff here—vision quests, reincarnation, slow time. As a writer, you have come up with an amazing concept. The vision scenes hold the key to additional tension and action. As written, these are immensely powerful mental and visual sequences.
–Script Pipeline, Hollywood, Ca.

Stan Ellis highlights his life as a “miraculous adventure.” Growing up in a military family, their travels served as highly imaginary boyhood expeditions. After college and two years in the US Army, from which he was honorably discharged, Stan married his soul mate, Renee Gorman, in 1981 and adopted her three children. Renee’s passing in 2006 initiated Stan’s quest for and realization of his “true being.”

Stan is now retired from a unique career involving his professional skills in behavioral analysis and counseling. In the thirty-year span of his career in human services, he has served as a behavior therapist, rehabilitation coordinator, children’s protective services investigator, foster care counselor, adoptions counselor, and residential training center’s facility administrator. He now resides near the Central Florida gulf coast where he practices spiritual meditation and writes. Canoeing and hiking are his connection to a lifelong relationship with Mother Nature.