Finding Myself in the Country 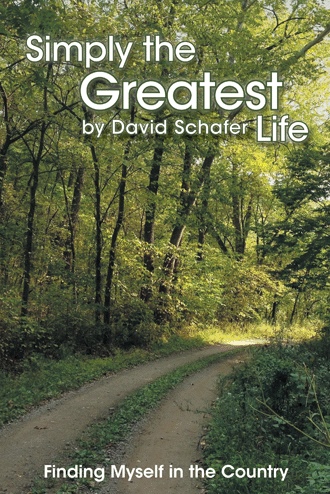 “Can you give me a hand?” the young Amish man hailed from the gate. “I’ve got a chainsaw stuck in a burning tree!”
We nodded a shocked yes from our car and watched him open the gate, hop back into his buggy, and race across the farm. That explained the mystery of the racing buggy we’d been following, but a chain saw stuck in a burning tree? That was more mysterious. We followed at top buggy speed, taking in everything we could about this farm, part of which we hoped to buy.
When we crested a hill, everything suddenly turned black in front of us. The pastures had burned and so had part of the woods. The buggy wheels left parallel lines in the burnt grass pointing toward the mysterious chainsaw and burning tree somewhere in the distance.
Once again, we were astounded at the timing.
The first time Alice and I had come to see this property, three months earlier, the nearest Amish neighbors, the Menno Graber family, were having church in their home. Buggies and horses lined the little gravel road and the strong, pious singing that rose out of the dwelling set a reverential tone. Each Amish home hosts a church meeting about twice a year and we just happened upon this one at the Graber’s – the first we had ever seen – as we drove to this property, this sacred land, to check it out.
Our visit to meet Norman to see if he might be interested in selling some land already had us charged with emotion. How often do you approach a complete stranger and just ask if they’d like to sell some property? Well, I guess he wasn’t a complete stranger; we knew some of his relatives. But we were still a little uncertain about what Ernie Kauffman had told us.
“Norman is a bit unstable but settling down,” he said.
“What do you mean ‘unstable?’” we asked nervously.
Ernie laughed his gentle laugh, seeing that our minds had sped off in the wrong direction. “I just mean he’s young and unmarried and not really established in the community yet.”
Alice and I were always eager to learn more about these people who placed such a high value on community. So, unstable referred to Norman’s place in the community. Well, there’s probably an unstable period in nearly every young person’s life, I had thought at the time. But as I took in the speeding buggy, burnt pastures, and prospect of chainsaw and burning tree, I couldn’t help wonder if there was more to this ‘unstable’ Norman than Ernie let on.
Ernie was our best friend among the Amish and he had offered, exactly one month earlier, to introduce us to Norman some time. It was all we could do to let a month go by, but we thought it would seem overly eager to meet Norman any sooner. Now here we were, accompanied by Ernie, coming on the day Norman’s property somehow caught on fire. And arriving, in fact, at the exact moment that he was riding into his property to tangle with a chainsaw and burning tree, needing help.
The buggy stopped at the corner of the pasture and Norman jumped out with a chainsaw in hand – one he had just borrowed from Menno Graber, as it turned out. We followed him into the woods. The fire had been put out by the Jamesport Rural Fire Department after only a short intrusion into the woods, but, sure enough, right on the edge of the fire line there stood one old tree with fire in it. If it fell in the wrong direction or dropped a burning limb the fire would start up again. With the firefighters gone, Norman had been cutting the tree down and trying to make it fall into the burned area. This was not necessarily the way the tree wanted to fall and it had rocked back onto his chain saw, pinching it in a wooden vice. Only another chain saw could get it out, so Norman had sped to his nearest neighbor to borrow one and that’s where we picked up the adventure.

Norman began to cut on the other side of the tree while Ernie held the pinched saw, ready to quickly pull it out and skedaddle when the tree fell. Alice and I watched the dangerous drama from a respectful distance. Either of them could be badly hurt or killed; falling trees have killed or severely injured several people we know. Alice and I confirmed later we had been thinking the same thought: that we might soon be talking to someone else about buying this property!
I felt sympathy for Norman. I knew all too well what he had gone through this afternoon. About ten years earlier, I had caught a large pasture on fire while burning leftover piles of hay – probably what Norman had been doing. I left thinking the fire couldn’t spread. A little later I saw fire engines and pickups racing into that pasture. Our neighbor, Mickey, had called the fire department and it was a good thing he had. Dry grass had caught fire and taken it to the edge of the woods. The fire crew put it out there but it could have burned a lot of woods. That incident had given me quite a lot to think about.
Later, at Mickey’s urging, Alice and I joined the Grundy Country Rural Fire Department and trained and fought many fires with them. Mickey was ex-Navy and versed in fire fighting. We helped raise money for equipment; we trained with the Trenton Fire Department, even going inside burning houses. We had experienced many house and barn and grass fires and knew how exhausting it was to fight them all. One of our fellow GCRFD members, Gary King, had a heart attack and died while fighting a fire. We took it seriously.
Branches fell around Ernie and Norman as the tree rocked and the chainsaw whined. Seeing the right moment, Ernie pulled the pinched saw out and retreated to safety. Down came the tree with a crash onto the blackened forest floor. We doused the tree with water from a back pack left by the Jamesport Rural Fire Department until we were satisfied that all danger was past.

In this long-awaited sequel, “America’s James Herriot” over-delivers on his continuing Greatest Life rural saga with some (simple) twists:

• A community-built home of sticks, straw and stone

Join sustainable farming pioneers as they walk the talk to adopt a sustainable lifestyle, not by living without but by living full out—with simplicity built in! Heartwarming, instructive, and entertaining, Simply the Greatest Life is a country-fresh collection of stories that will inspire you to the best version of your life.

David Schafer proved ignorance is bliss when he moved to his grandparent's family farm in north Missouri. But turning his citified handicap to his best advantage, David explored alternative agricultural avenues that didn't export the scant topsoil he inherited. Three trips to New Zealand and an intense study of pasture management later, he founded the Green Hills Farm Project producer group of north Missouri and helped create the noted Linneus, Missouri Grazing School.

Finding success in marketing home-raised meats and manufacturing poultry processing equipment (chicken pluckers!), he set about homesteading an ideal life in the country, built an off-the-grid, stone-walled, straw bale house with the help of Amish neighbors. He 'hid out' in his paradise while pioneering more innovations to aid the modern rural agri-preneur.

The contrast of being 'head-down and bum-up' at the old family farm helped create the 'work smarter not harder' mantra at the new "Wonderland" farm, and the results are evident in David's charmed life. A staunch believer in the magnetic power of his thoughts and actions, David shows how he lives his life to create a business from heaven, a uniquely green home and productive farmstead, a dynamic community, and loving relationships.